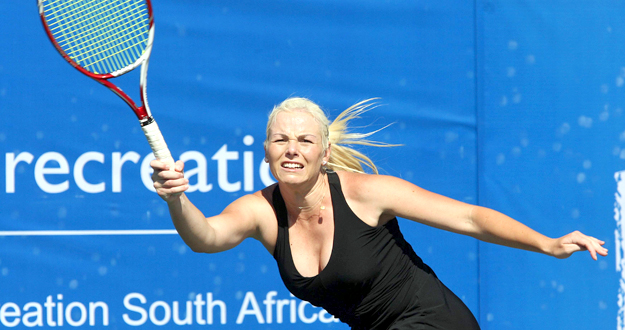 Lynn Kiro was the only South African in singles action at the Arthur Ashe Tennis Complex in Jabavu, Soweto on Tuesday, but she came up against the in-form third seed Tadeja Majeric of Slovenia, who was ruthless in her onslaught and gave little hope to Kiro, eliminating the South African 6-0 6-2.

“It was tough playing out there today,” said Kiro. “I was nervous and just came up against a better player in Tadeja. Playing Tadeja, I could see she had a ton of experience compared to me, and I used the wrong tactics. When I changed my tactical approach in the second set I felt better, but it was too late,” said Kiro.

Like Majeric, the $50,000 tournament’s seeded players enjoyed another good day on Tuesday, and at the end of Tuesday’s play, none of the seeds had stumbled out the tournament.

Top women seed, Timea Babos was in devastating form on court today (Tuesday). The Hungarian needed only 55 minutes to dispose of Karen Shlomo of Israel 6-1 6-2, to move into round two of the international event being played at the Arthur Ashe Tennis Complex.

Right after her victory, Babos went straight back onto the practise court for a solid two-hour session, as she felt she had not been extended in her opener, and needed to work on her serve and returns, in order to be well-prepared for her Wednesday clash against Turkey’s Pemra Ozgen.

Ranked 114 in world tennis, Babos was ranked as high as 59 in the world last year in August, before an arm injury forced her out of the game for over two months, and she is hungry to work her way back into the top 100.

“I am very happy coming to play in South Africa. I love the altitude and hard courts, and the Soweto courts suite my game. It’s important I do well here as I need the points to get into the top 100, and automatically qualify for Wimbledon.”

The Soweto Open is the last tournament on the international calendar where players can accumulate points to count towards Wimbledon qualification.

Nadiya Kichenok of the Ukraine lost only two games in beating American Alexandra Riley. Zuzana Zlochova of Slovakia also cruised through to round two, beating Nicole Rottmann of Austria 6-3 6-2. Kichenok will now face Zlochova in round 2 on Wednesday.

Three South African’s will be in action on Wednesday in round two, with SA number 2 and tournament fifth seed Chanel Simmonds facing her friend, training partner and compatriot, Natasha Fourouclas, whilst wild-card Madrie le Roux will have to pull out all the stops in her battle against Britain’s Samantha Murray, seeded 7.

Second round play at the Arthur Ashe Tennis Complex starts at 10h00 on Wednesday. Entry is free, and for directions to the Complex go to www.tennissa.co.za 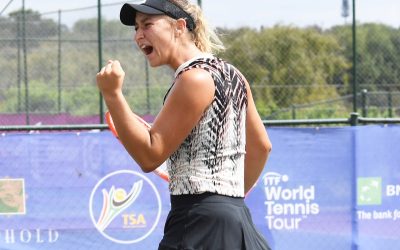