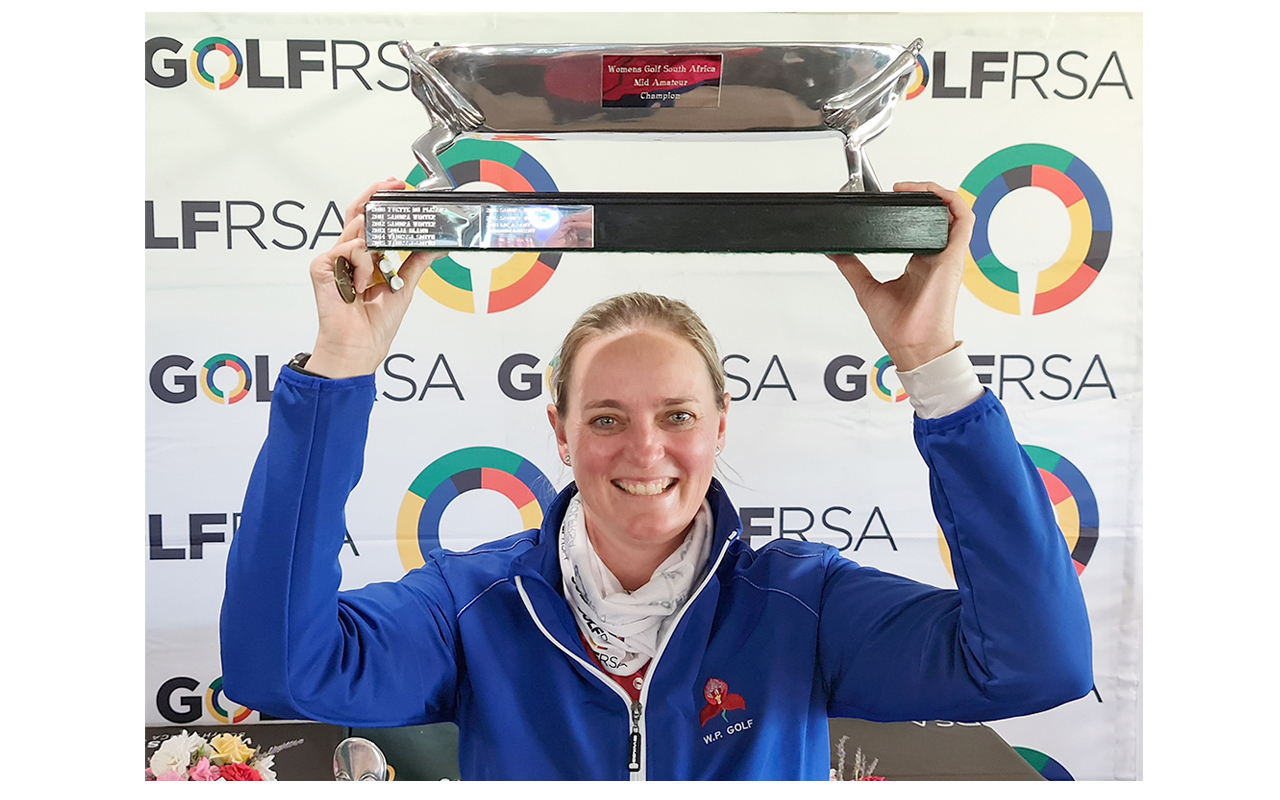 Vicki Traut came through an intense battle of attrition on the final day at Robertson Golf Club to celebrate back-to-back victories in the South African Women’s Mid-Amateur Championship on Wednesday, 18 November 2020.

The Erinvale golfer got her title defence in the quaint Cape Winelands town off to a strong start with a two-over-par 74 that earned her a four-shot lead.

Traut was still at the summit on eight-over after the second round, but her advantage had been cut to just one shot by a charging Nina Grey, who catapulted to second with a round of 74.

Unlike last year – when Traut scored a runaway five-shot victory in her debut at Selborne Park Golf Club, things did not go smoothly for the Western Province golfer.

“The rain was coming down so hard that I figured the best strategy would be to play for two-putt pars.” – 2020 SA Mid-Amateur Championship winner, Vicki Traut

She backpedalled with a bogey, double-bogey combination on the seventh and eighth holes and dropped further shots on 10 and 11. With six holes to play, the 2019 champion found herself trailing Grey and two-time former champion, Vanessa Smith, by a shot.

“I realised I had to adjust my strategy. I stopped chasing birdies, and rather aimed for the centre of the greens. The rain was coming down so hard that I figured the best strategy would be to play for two-putt pars.”

The policy change paid off for Traut, who strung together a sequence of pars.

Smith from Paarl Golf Club had soft drops on 13, 15 and 17 and Grey slipped from contention with a triple bogey at the par four 17th. Heading into the closing hole, Traut had gained a two-shot lead.

“I wanted to withdraw, but my family wasn’t having it. My husband and my two boys were adamant that I come to defend my title.” – Traut speaks on a challenging test she faced during the championship as her son was admitted to hospital.

The tournament had been an emotional test for Traut and she was proud and delighted to have bounced back to win.

“My youngest son, Max had been admitted to hospital last week and the doctors were uncertain what exactly was wrong. He kept on spiking a fever, and the fever only broke with the third different antibiotic they tried,” she said.

“I wanted to withdraw, but my family wasn’t having it. My husband and my two boys were adamant that I come to defend my title, but it was really hard to be apart from them with everything going on.

“His fever finally broke on Monday night, and it was the best thing ever to see my two boys standing behind the 18th waiting for me after the second round. But today, I think it all caught up with me.

“I am usually so good at compartmentalising, but I was so topsy-turvy out there and my thoughts were all over the place, especially over the first nine holes. I know it was bucketing out there, but I really can’t blame the rain for the way I played.

“I’m walking away from this with the knowledge that I can be very strong and that I can recover. I’m dedicating this victory to my amazing husband Richard and my gorgeous sons Alex and Max, to my parents, Dianne and Johan. Their support means the world to me.”

Paarl Golf Club’s Smith parred the final hole for a 74 to finish on 16-over, and Grey signed off on 16-over with a final round 80.

Heather Kruger claimed the B-Division title in wire-to-wire style. The Country Club Johannesburg golfer posted rounds of 81, 91 and 82 to edge out Fancourt’s Jenny du Preez by three strokes on a winning aggregate of 38 over par.

“I’m pleased as punch,” said Kruger. “I am so glad I decided to make the trip to Robertson, because the experience was amazing. Winning was just the cherry on top. I had a great time getting to know so many new people and the course was just fantastic.”

It was a memorable week for Marialese Coetzee, as well, when the Oubaai Golf Club Ladies Captain, making her debut in the national championship, posted 33 points in the final round to win the C-Division with a winning score of 102.

“I can’t believe I won in my very first SA Womens’ Mid-Amateur,” said the delighted Coetzee. “Everything they told me about this tournament is true. I had an absolute blast. The camaraderie among the women across all the divisions is amazing; I had so much fun and so many laughs with my playing partners every day. It was fiercely competitive, but you forget that you’re playing in a national tournament. I’m definitely defending next year.”

Sonja Bland from Fancourt – the champion in 2013 – also celebrated a successful title defence when she lifted the LGU Quaich Senior Trophy for a third consecutive year.

Bland, who finished fifth overall in the A-Division, won the Senior Division on winning score of 25-over, finishing eight strokes clear of Karin Watts from Services Golf Club.

“I want to applaud Women’s Golf South Africa for creating such a safe environment for us and for doing everything by the book to make this year’s championship happen.

“We were extremely well looked after throughout the tournament by the GolfRSA team and the Robertson Golf Club staff and, despite the masks, the daily screening and the abundance of sanitisers, it was great to have a bit of ‘normal’ back in our lives.”