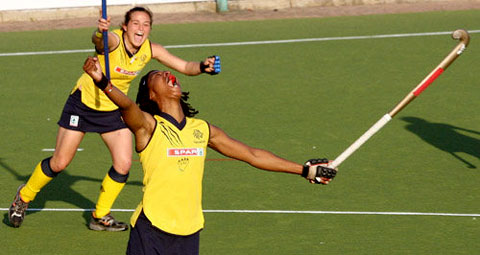 Tsoanelo Pholo lives and breathes hockey. She picked up a hockey stick 16 years ago and has not looked back.

The on-fire Kaspersky Southern Gauteng striker and 2004 Olympian has achieved highlights in the game, both locally and internationally, and says her goals as a player have all been reached.

Tsoanelo’s focus is now on coaching. She says: “I love coaching the youth; giving a kid the tools and opportunity to reach his/her potential.”

Her passion for hockey extends to others doing well in the game, too. She is extremely vocal on social media platforms, particularly twitter, in support of the national team.

She describes her mother as a rock, and her role models, and also has good things to say about national captain Marsha Marescia, one of her best friends.

Her advice to aspiring hockey players?

“There is absolutely no limit to what hard work, passion and having fun can bring you.”

The proud South African was talking to gsport shortly after being named Attacker of the Tournament at the recent SAHA Women’s Interprovincial Tournament in Randburg, which was won by Southerns.

Tsoanelo, congratulations on winning Attacker of the Tournament at the recent Hockey IPT. How do you feel about receiving that accolade?

It is a huge honour to have been named Attacker of the Tournament; there are so many talented players in our country, it is really amazing to have been recognised.

What was your experience of the tournament?

Southern Gauteng Hockey Association hosted a really great tournament; running both the A & B sections in the same week at the same venue is not easy but they pulled it off. It was always going to be an exciting tournament with it happening right after the Olympic games and just before the Paralympics… everyone was just so keen to compete.

Playing for Southern Gauteng is all I know really… I’ve played in 12 Ladies IPTs, all for the same province! I have played with the best ladies hockey players the country has produced including SA Captains Karen Roberts, Susan Webber, Lindsay Wright & the current captain, Marsha Marescia.

What gave the team the edge in the final?

How long have you played hockey and what made you take up the game?

I picked up my first stick 16 years ago; I was at Greenside High school then. I’d played soccer with the boys in primary school and hockey was the closest sport to it when I got to high school.

You’ve experienced highlights in hockey at all levels up to international. How do you feel about the game now?

Hockey is and will forever be my passion, I play and coach as much as I can… I just want to spread the love and knowledge.

What has been your greatest personal sporting highlight?

The highlight of my career is the goal I scored against Spain at the Athens Olympic Games in 2004.

How do you feel about the standard of women’s hockey in South Africa?

The standard of women’s hockey is building at a rapid pace; it is very exciting being a player, coach and a supporter right now. I’m can’t wait to see where the new SAHA President, Mike Du Plessis has up his sleeve to keep us riding the wave we are on.

What can we do to raise the profile of women’s sport?

Women’s sport in South Africa needs WAY more exposure. Broadcasters (TV and Radio) need to get behind our ladies teams; sponsors too need to get involved. South Africans are a passionate people, put our teams on the TV & we will watch! I’d be interested to see how many people tuned into the Olympic games and Paralympics where there is no rugby and cricket.

Who are some of the sportswomen you look up to?

You are a vocal supporter of the national team, particularly on twitter.

#TeamBehindTheTeam is just a bunch of us fans, family and friends of the SA hockey teams (@SAWhockey @SA_hockey). Having travelled for many years with the national team, I know how hard & lonely it can be being away from home for that long and we always appreciated hearing from home. Social media is an amazing tool and way to keep all the fans informed and in touch with our teams when they are out there doing what they do best.

What are your goals in terms of hockey going forward?

My goals as a player have all been reached; I am one lucky lady to be able to say that. In terms of coaching, I think I’ve just gotten into my stride; my coaching future should be a very interesting one. I love coaching the youth; giving a kid the tools and opportunity to reach his/her potential.

What else occupies your time aside from hockey?

Besides work and family, I completely submerge myself in hockey a full 8 months of the year.

What is the best advice you have received?

My 1st national coach Ros Howell says, “CONTROL THE CONTROLABLES”. That is such a powerful way of approaching every single life situation; control and worry about what you can control and accept the things you cannot.

Who are your sponsors?

I am very fortunate to be sponsored by the manufacturers of the best hockey equipment and apparel, @TK_hockey through Baseline Sports & @Rassie_Pieterse.

What is your advice to aspiring hockey players?

I have made so many friends and “found myself” through this beautiful hobby that became my passion and dreams. There is absolutely no limit to what hard work, passion and having fun can bring you.

My inspiration is trying to reach my life potential and touch as many lives as I can while doing that. Nobody knows what that potential is so we must just seek perfection.

As clichéd as it is, my mom is my rock; actually my mom and my big brother… they inspire me to be the best me. My friend Marsha is such an inspiration to me; she has sacrificed so much and given so much of herself to SA Hockey.

What makes you proud to be South African?

The massive potential we have as a nation and how we all unite behind our sporting heroes.

My greatest ambition Is to touch as many people as possible and leave them knowing that I made a positive impact in their lives… and hopefully they will do the same for others. 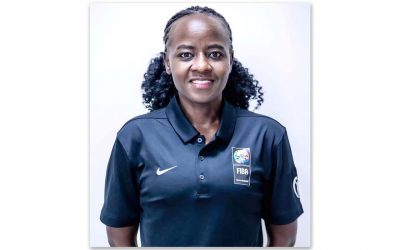 Dorothy Okatch has overcome many challenges to pursue her passion for basketball as she is currently Botswana’s first female FIBA licensed referee. She chats to Tatenda Gondo about her journey #gsportAfrica

NWU Ladies football team player, Tshenolo Kgashwane, is climbing the ranks in the Sasol League as she draws inspiration from global football stars, Alex Morgan and Linda Motlhalo. She chats to Tlamelo Kganakga about her aspirations #SundayRead