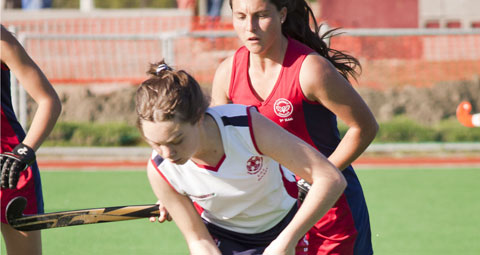 U18 Schools Festival Semis Up

The outcome of several matches on day two at the Cape Town International Schools’ and Clubs Under-18 Hockey Festival at Hartleyvale and surrounding venues Thursday held the key to the fortunes of a number of top sides in this 32-team tournament.

The girls’ semi-finals pit Paarl Gimnasium against Somerset College on Hartleyvale’s B pitch at 3 pm before Bloemhof take on DF Malan in the second semi-final on the same field at 4.30 pm.

There are a number of teams who can consider themselves unfortunate that the odd goal here, and mistake there, cost them a spot in the main matches, but that is the cut-throat nature of tournament hockey.

A titanic contest in the girls’ competition saw Group A semi-final contenders Paarl Gimnasium and the Australian lasses in the New South Wales Bushrangers side knowing full well that the winners would stay in the hunt for a berth in Sunday’s girls’ festival final, which will kick off at 2.30 pm at Hartleyvale Hockey Stadium.

Honours remained even throughout a passionate match and it took until the last minute for the teams to finally be separated, the Paarl Gim fans at Hartleyvale erupting when Michelle Marx netted the winner from a penalty corner.

Another match at Hartleyvale that exemplified the value this tournament holds for the teams was the Group A clash between top contenders Parel Vallei and the Bushrangers from New South Wales, who hail from the Sydney area of that great hockey country, Australia.

The hard-fought 0-0 draw was played with enormous passion as both sides put everything into hammering out a victory.