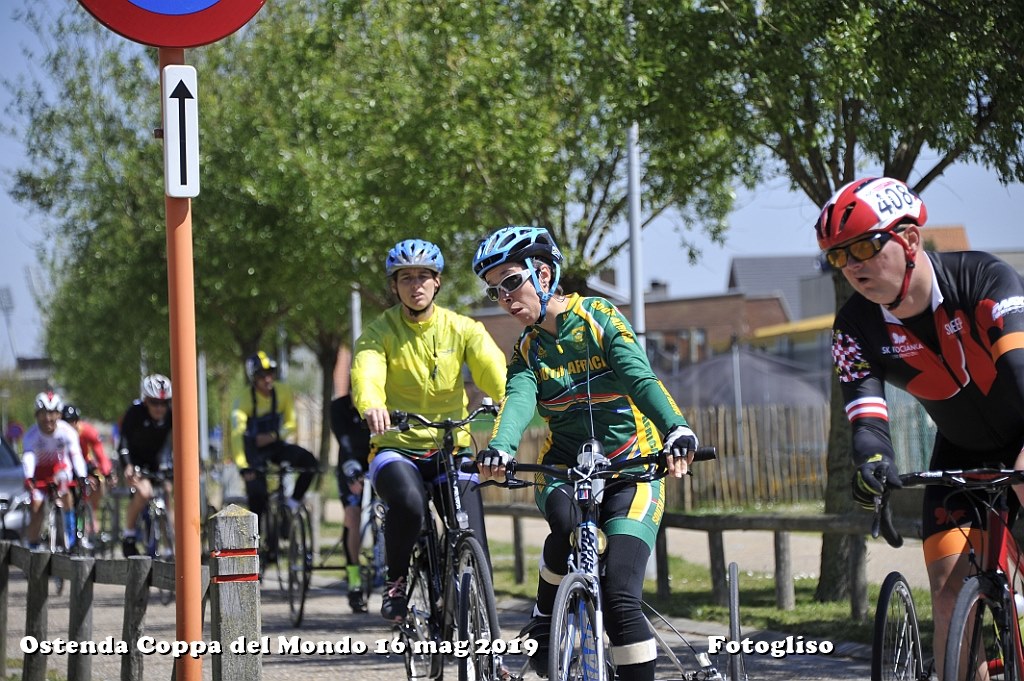 I just realized that I haven’t updated you lately. So let’s fix that! During the month of May I went to Italy and Belgium to represent South Africa at the UCI Para Road World Cups. Here’s a recap of my adventures.

The first World Cup was in Corridonia, Italy.

The whole week in Italy there was great uncertainty as to whether I should race.  When we arrived we found out that there were some very steep descents on the first half of the course which made it very dangerous for those riding trikes.  The main reason people ride on tricycles is because that person has a balance problem, so a lot of trike riders have trouble with descending.

Many of the trike riders complained about the course and after failing to get the officials to change the course at the last minute, a few of the trikes withdrew from the races, including the T2 men’s rider Hans Peter Durst who has won numerous World Cup races and World Championships.  Our manager was reluctant to let me ride the course but after several conversations between myself, Anet, and O’Ryan we decided that I would do a practice session on Thursday and then we would make a final decision.

Thursday morning before the competition started I went out for a ride.  I made it through the first section well,  but when I got to the really steep section I asked Anet to get out of the car behind me and walk beside the trike with her hand centimetres away from my handlebars.

“Although I took it extremely slow and was very fearful I made it down and managed to complete the course.” – gsport blogger Toni Mould

I was extremely proud of myself for trying and succeeding.  Goldy, our other trike rider decided not to ride the course on the Thursday after trying the first section of the course and becoming very fearful.  After hearing my comments and getting some strong encouragement from the team and his mother back in South Africa, he would race the races over the weekend though.

Friday was my time trial and I was nervous.  We hadn’t been able to hire another bicycle so Anet could not ride behind me but she and O’Ryan followed me in the car and I had an ear piece so that Anet could tell me when bikes or cars were approaching me from behind as she normally does on the bike behind me.  The downhill section was once again very scary and this time I didn’t have Anet walking beside me. If I remember correctly I may have had tears in my eyes from fear by the time I hit the bottom of the hill but also immense pride that I had conquered that section.

Sadly, the downhill had taken so long for me to do that by the time I hit the straight and the uphill section I knew I wasn’t really going to make an impact on the race.  Because there was only three of us in the race I finished third, but without a medal.  (When there are three competitors only two get medals. )

The next day was supposed to be my road race on the same course. At the hotel we had a conversation and decided that I would only race if I could have a following car behind me.  We knew it was unlikely as in the road race no following cars are usually allowed  in a road race due to the number of trikes on the road at the same time, but we were uncomfortable with me racing the downhill section alone,  as there had been several riders who had come off their bikes on the course.

Once we had arrived at the race and confirmed that no cars were allowed we had a quick chat to see if there wasn’t any other way I could safely race but in the end myself, Anet, and O’ryan all decided that with two races still to come in Belgium, it was better for me to sit it out.  I used the time to ( for the first time in my life) watch some trike racing (I can never see  the trikes racing because I am always racing with them).

From Italy we went to Ostend in Belgium for the next World Cup.  I really enjoyed Belgium.  We stayed in a nice hotel with all the other countries’ teams so it was really a great atmosphere with all the athletes from all over the world staying together.

I was hoping for a good time trial on the Thursday despite the 18km time trial being the longest time trial I had ever done.  Unfortunately, the wind decided to REALLY blow the morning of my race and as we were racing right along the beach front it caused everyone who raced in my time slot to really struggle to get good speeds.  I once again finished third out of three riders.

The Saturday morning was my road race and the last race of the tour.  This time the race was slightly more in the town so it wasn’t as windy.  I had a great start to the race, so great that Anet missed filming my start because, where I am normally at the back of the bunch, I started so well that I was in the middle of our bunch for a while and then I managed to stay with one of the male riders at the back is of the race for half an lap before I got dropped.

“The road race route really suited me and I was elated to cross the line with a new personal best average speed and another third place.”  – Toni Mould

To finish the tour with a new PB on a course which will be hosting next year’s World Championships was an excellent end to the tour.  I may not have received any medals but I do believe I that I returned to South Africa a better cyclist and more motivated than ever.

I have been selected for the World Championships in the Netherlands in September.

This will be my fifth competition and the final one of the year.  The tour is self-funded and I hope to raise the rest of the money in the next two months.

Anyone who is willing to make a contribution to my crowdfunding campaign, whether its R100 or R10 000  can do so at https://www.backabuddy.co.za/champion/project/tonis-paracyling-world-championship-2019 or they can email me on [email protected].

In 2013 I was introduced by a friend who was at that time representing South Africa in para-cycling. After starting to compete in races at local level those around me saw my passion and potential and encouraged me to consider competing at national level but I needed a competitive tricycle. After eighteen months I received my new trike and I entered the South African National Time Trial and Road Race Championships. After winning two gold medals at those Championships I was included in the South African team for the World Cup later that year. In the four years that I have been competing on international level I have participated in two World Cups and two World Championships. In 2016 I won the overall World Cup in my class and in 2017 I won a silver medal at the World Championships. In 2018 I went to my first overseas competition and took part in the World Championships in Italy. This year I have been included in the SA team that will go to the World Cups in Italy and Belgium during the month of May. I am the only T1 cyclist in South Africa and am in need of sponsors.