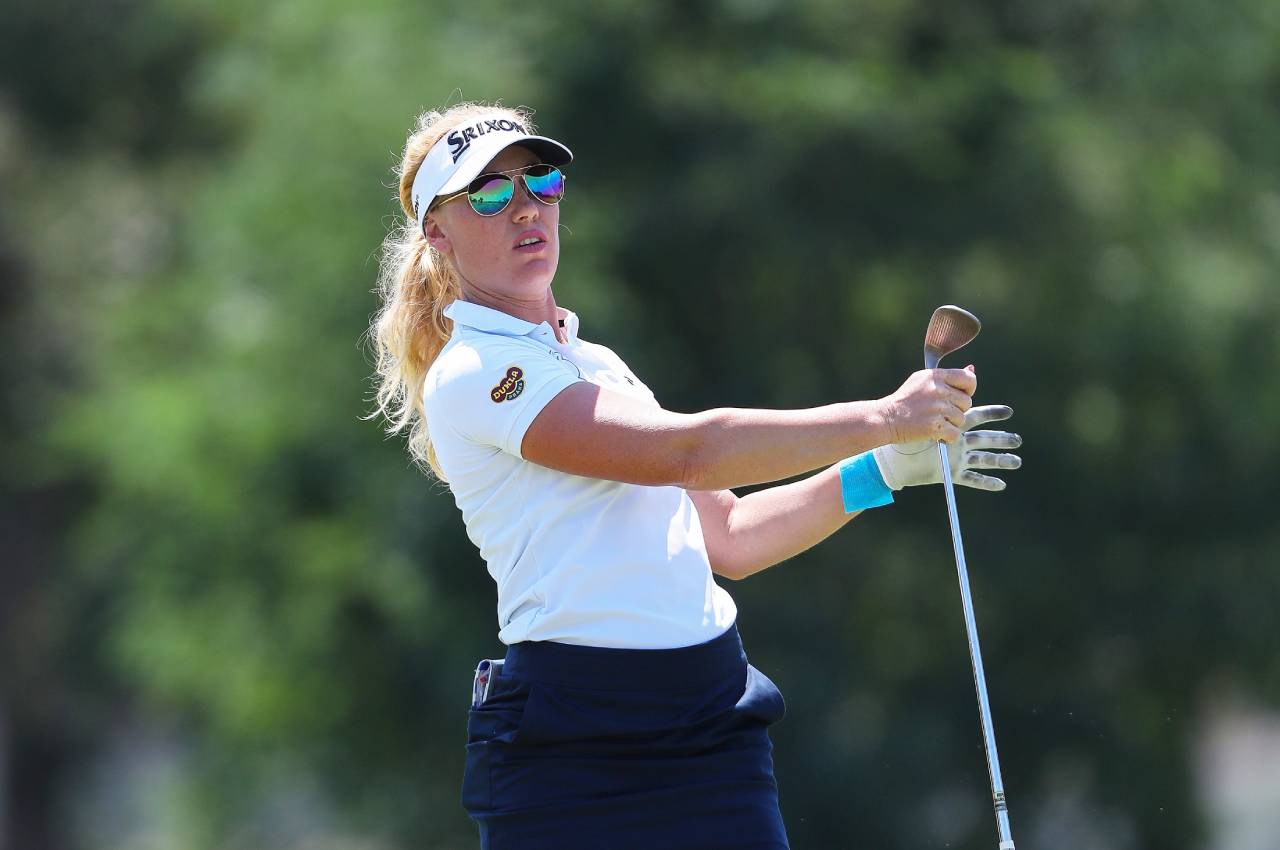 Vanova Delighted to Lead the Way in Soweto

Sideri Vanova didn’t know what to expect when she teed it up in the Joburg Ladies Open on Wednesday, 26 February 2020, but the Czech was pleasantly surprised to get her 2020 campaign off to a flying start at the Soweto Country Club.

Vanova fired a three-under-par 69 in her Sunshine Ladies Tour debut to lead the field, finishing one shot clear of Maria Beautell from Spain and two strokes ahead of birthday girl Monique Smit.

Vanova reeled in four birdies – including consecutive gains on 14 and 15 – to turn four-under, but interrupted a string of pars on her homeward loop with a lone bogey at the par three seventh.

“I really didn’t know what to expect when I put my game under pressure, but I think it went well.” – Czech Republic golfer, Sideri Vanova.

“I switched coaches at the end of last year and spent the entire off-season on swing changes. I really didn’t know what to expect when I put my game under pressure, but I think it went well,” said the 31-year-old Ladies European Tour campaigner.

“I was really consistent off the tee with the driver and the irons and I was very accurate with my approach shots. That was really key for me. We worked a lot of tightening up my short-game and the whole game came together well today.”

Vanova’s only previous visit to South Africa was during the 2018 Investec South African Women’s Open, which is co-sanctioned with the Sunshine Ladies Tour. Instead of following the Ladies European Tour to Australia, she decided to kick off her season in the R500 000 Joburg Ladies Open to hone her game for this year’s €200 000 showpiece at Westlake next month.

“It’s such a long trip from Australia to South Africa, so I am really happy with my decision. I stayed in Dubai to work with my coach and came out for this week and the Jabra Ladies Classic next week to get the game in shape,” she said.

“It’s only an eight-hour flight to South Africa and I will have two extra days in Cape Town to adjust to sea level. The Sunshine Ladies Tour is very competitive, so it’s a great circuit to have to get ready. There are about 30 of us in the field this week, so it looks like a lot of other internationals have elected to play the Sunshine Ladies Tour this year, instead of Australia.”

“I love coming out to the South Africa every year.” – Tenerife golfer, Maria Beautell.

Beautell is a past SA Women’s Masters champion and has been a staunch supporter of the Sunshine Ladies Tour for the last seven years. “I love coming out to the South Africa every year to prepare for the start of the season, which is usually around April for me,” said Beautell.

The Tenerife golfer mixed five birdies with two bogeys on her front nine, but racked up nine straight pars coming home. “It was a bit up-and-down, but I definitely control my game better on the last nine holes,” she said. “That’s how I would like to start tomorrow. I had a good start to the season with a top 12 finish in the Dimension Data Ladies Pro-Am and was top seven at San Lameer, so I’m moving in the right direction.”

Smit, coming off back-to-back top five finishes, had three birdies on the bounce from the par five 12th after a birdie start, but let the lead slip with bogeys on 17, six and seven.

“The course is really tight and if you are just a metre of so off the fairway, you are punished quite severely and that’s what happened to me,” said the Oubaai golfer.

“I made three really good birdies early on and held the momentum, but paid the price for not hitting fairways on the back nine. I’m more than happy to be one-under and just two behind. There still a lot of golf to be played.”

Barbaglia, playing with Vanova for the first two rounds, was impressed with the leaders’ course management. “I wanted to play with the pros to learn from them and watching Sideri out there was incredible,” said the 14-year-old Gauteng junior.

“She barely missed a fairway and her approach shots were very accurate; just once or twice she got a hard bounce, but most of the time she was within two or three feet from the hole. I really saw how important a good short game is and I’m excited to play with her again on Thursday.”

First Round Scores:
(All competitors RSA unless stated otherwise stated and amateurs are indicated AMA)