The 22-year-old Stander, who races for the Momentum Toyota professional road team, competes in the occasional mountain bike race when her schedule allows and has proven to be a strong contender in any race she’s entered, even winning some regional events.

But on Saturday she faced her biggest mountain bike challenge yet when she lined up against a strong field of contenders in the 75km race on a tough course that included 1,850 metres of ascent. That the conditions were wet and muddy upped the difficulty factor in the race, which was also Round 6 of the eight-leg MTN National Marathon Series.

Stander and pre-race favourite, Ariane Kleinhans (Contego 28E), began to open up a lead over the other women early on. And then with 35km remaining, on the longest climb of the race, Stander moved clear of Kleinhans and then charged off on a solo mission to the finish, crossing the line first in a time of 3 hours and 55 minutes. Kleinhans finished second and Ischen Stopforth (bizhub FCF) third.

“I was a bit surprised to win,” admitted Stander. “I was hoping for a top three, but winning is obviously a fantastic result for me.”

Stander said she decided to go into the race conservatively, since she wasn’t under any pressure to excel coming from a full season of road racing, which included a stage win at the Route de France, the women’s version of the Tour de France.

“Then, on the longish climb, which had the King of the Mountain prize for the men’s race, I thought I’d put in a bit of a surge and see how she’d react.

“I ended up getting away from her and once over the summit, after seeing what a gap I had on her, I just decided to put my head down and go for the win,” explained Stander.

The muddy, wet and cold conditions definitely had an impact on the race. “There was a lot of rain and wind which made the going hard. Just under four hours was a long time in the saddle for 75km.

I thought the race was actually 70km long, so was in all kinds of discomfort for the last five kays. My average heart rate for the entire race was 170 beats per minute, high when you consider my maximum is 195bpm.”

Stander, who is married to top international mountain bike racer, Burry Stander, says the lack of pressure definitely made the race enjoyable and the victory even sweeter.

“In a road race I have all sorts of pressure, both personal and from a team perspective. Here I just had fun. There were no team tactics to think about, just riding as hard as I could. I really enjoyed it,” said Stander, who won the national Elite road race title in 2008 and 2010 and the national Elite individual time trial title in 2011 and 2012.

“I went into the race quite fresh, after having taken a break for most of the last two weeks. But before that I did quite a few stage races in Europe, some back-to-back, which obviously got me into good form.

I’ll do a couple of other mountain bike races before the end of the year, but my main focus is the road world champs as well as high profile local road races,” added Stander. 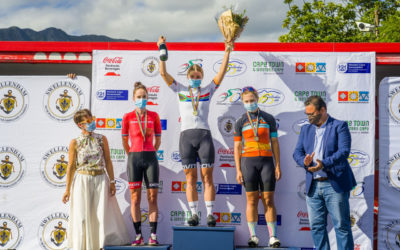