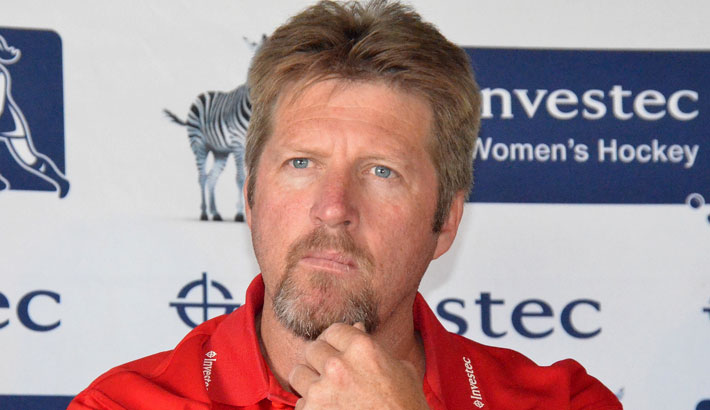 The Investec South Africa women’s hockey team head coach Giles Bonnet has completed his four-year term with the national women’s team. The former SA men’s captain and head coach is a firm believer in the four-year cycle and as such is not available for another term with ‎the team.

“The contribution made by Giles to the Investec SA team and SA Hockey at large, since his appointment as head coach in 2010 has been of the highest standard and dedication to the game of hockey in South Africa,” SA Hockey Association (SAHA) CEO Marissa Langeni said Wednesday.

“The Executive Board of SA Hockey would like to take this opportunity to thank Giles for his service to Women’s Hockey in our country and wish him all the best for the future.”

Bonnet said he leaves the position satisfied that the progression of the team has grown in leaps and bounds. “As a coach I have been very impressed with the phenomenal progress that the players have made through their hard work and incredible sacrifices in the last four years.

“This culture change was due to the environment provided by SA Hockey and team sponsors Investec, the capacity of the staff and consultants that I was able to work with, and the willingness of the players to push themselves to approach everything with a professionalism, which belied their amateur status.

“I wish the team, staff and SA Hockey every success in the challenging new period ahead.”

SA Hockey CEO Marissa Langeni said that Bonnet would always have a vested interest in South African Hockey. “We look forward to working closely with Giles in the near future on other projects as and when the opportunity arises,” said Langeni.

“On a personal note as the CEO of South African Hockey, I would like to thank Giles for his hard work with the Investec SA women’s team and for the many hours spent behind the scenes building a high-performance framework, engaging with stakeholders and sponsors and building valuable relationships within World Hockey.”

SAHA will be advertising the national women’s team head coach position in due course.

Photo 1 caption: South African hockey will lose a valuable resource as women’s coach Giles Bonnet does not make himself available on completion of his 4-year contract with the Investec SA women’s hockey team. Photo: Supplied