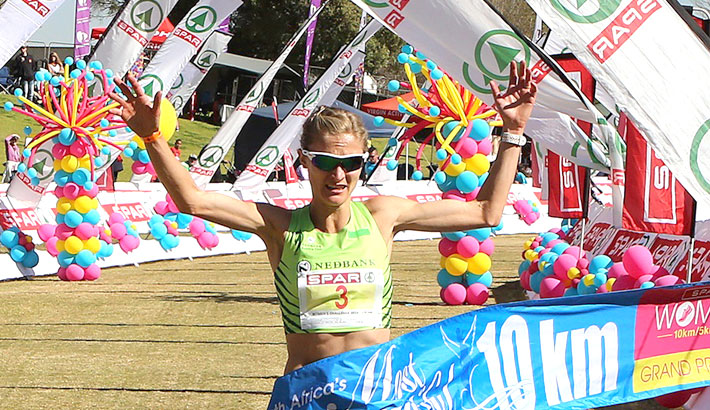 Irvette van Zyl was all smiles as she crossed the finishing line at the Pretoria SPAR Women’s 10km Challenge in a course record time of 33.32 minutes on Saturday, in her first Challenge win since 2012.

Words today can't describe what this win @SPARladiespta means 2 me! I feel so blessed and emotional right now. #blessedandthankful

Her Nedbank teammate, Rutendo Nyahora, was second, in 33.50, and the winner of last week’s Durban Challenge, Lebogang Phalula (Transnet) was third in 34.05.

The top runners started in a bunch, with van Zyl and Kalmer taking the early lead, but after two kilometres, the leading group started spreading out. The lead changed hands between Van Zyl and the Phalula sisters, until six kilometres, when Van Zyl surged to the front.

Running easily, she was in complete command and never looked like losing. “This means a lot to me,” said Van Zyl.

“I was determined to make top three, and I feel blessed to have won. I was more relaxed than I was in Durban last week, and I didn’t start as fast as I did there. I wasn’t under any pressure, and that helped.”

She said she had a couple of bad patches between three and five kilometres, but once she went into the lead after six, she just concentrated on her running style, and this paid off.

“I knew the last two kilometres were downhill, and that helped.”

She said the Pretoria race had always been her favourite Challenge race. “My first win was in Pretoria, as a junior. It is always a tough race, because it is in the afternoon, but I like tough races. There were a lot of hills, which I don’t like as much as I did when I was younger, but it was a tough course, and that suits me.”

Van Zyl said she would try to win the Johannesburg race as well, but her first priority was the Cape Town marathon on September 21.

“Marathons are the real test of your ability as an athlete, but I will always enjoy the shorter distances,” said Van Zyl.

Nyahora said she had struggled to keep up with the lead bunch at the start, but found herself getting stronger as the race went on.

“I wanted a top three finish, and I could see the Phalulas were struggling a bit, so I was happy when I passed both of them.”

Lebogang Phalula, who won in Durban last week, said she had started too fast. “I battled on the hills,” she said.

“But I had something to prove, because I tested positive for a banned substance in Pretoria a few years ago. I wanted to show that I was back.”

Diana-Lebo Phalula, who won the Cape Town and Port Elizabeth races in record times, still holds the lead on the SPAR Grand Prix ladder, and seems likely to win the Nissan Micra awarded to the top runner after the Johannesburg race in October.

More than 26 000 runners entered the 10km Challenge and the 5km Fun Run, and Supersport Park was a sea of blue t-shirts as the runners streamed onto the cricket field.

Photo 1 caption: Irvette van Zyl strode to the finish line of the Pretoria leg of the SPAR Women’s 10km Challenge race in complete command for an easy win to record a new course record, in the time of 33.32minutes. “This means a lot to me,” said Van Zyl. “I was determined to make top three, and I feel blessed to have won. I was more relaxed than I was in Durban last week, and I didn’t start as fast as I did there. I wasn’t under any pressure, and that helped.” Photo: Reg Caldecott

Photo 2 caption: Irvette van Zyl (left) leading the field with Lebogang Phalula (right). She went on to win the fourth leg of the SPAR Women’s 10km Challenge series, at SuperSport Park, Centurion on August 30, 2014 in Pretoria. Van Zyl said she had a couple of bad patches between three and five kilometres, but once she went into the lead after six, she just concentrated on her running style, and this paid off. “I knew the last two kilometres were downhill, and that helped.” Photo: Reg Caldecott