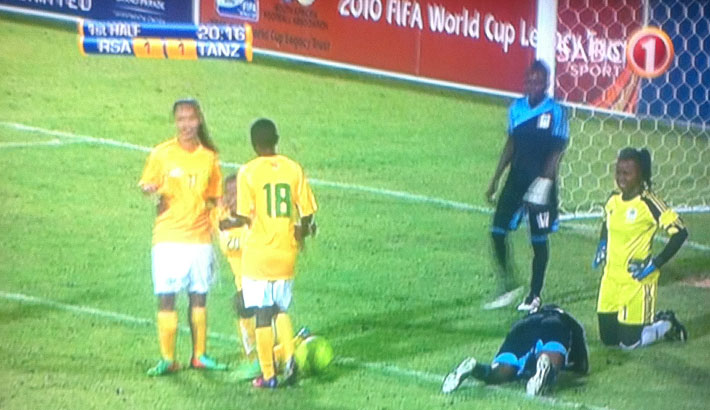 Shiwe Nogwanya, Leandra Smeda, Silindile Ngubane, Sanah Mollo and Captain Janine Van Wyk, who all play for teams in the Sasol League registered their names on the score sheet.

Coach Vera Pauw made only one change from the team that beat Zambia 4–0 in Lusaka a week ago. Mamello Makhabane started ahead of youngster Thembi Kgatlana in the middle of the park.

A well balanced first half with both teams having great goal scoring opportunities. Tanzania came close to opening the scoring in the opening minutes of the match, but the Banyana defenders did well to clear the ball out of danger.

Portia Modise also came close to opening the scoring for Banyana Banyana after receiving a great pass from Nogwanya inside the box, but her final pass was intercepted by the Tanzanian keeper in the 10th minute.

Five minutes later, the visitors broke the deadlock when they scored from a set-piece taken from just outside the box. Captain Sophia Edward took a first time shot at goal, beating keeper Andile Dlamini.

Sasol Banyana Banyana levelled the score in the 21st minute. Nogwanya found the back of the net after a goal mouth scramble, bringing the South African women back in the game.

Just before the half hour mark, Smeda extended the lead with a header from a corner kick, taking Sasol Banyana Banyana into the half-time break leading 2-1.

Pauw’s charges continued pilling pressure on the Tanzanians, missing a couple of goal scoring opportunities before Silindile Ngubane scored two goals deep into the second stanza and Sanah Mollo scoring one goal with just a few minutes of play remaining, ending the match 6–1 in favour of Sasol Banyana Banyana.

Photo 1 caption: Leandra Smeda (left) and Nompumelelo Nyandeni (no. 18 shirt) congratulate Shiwe Nogwanya (on the ground), after the striker equalised for South Africa in the 20th minute after Tanzania’s captain Sophia Mwasikili drew first blood, in an international friendly at the Peter Mokaba stadium on Sunday evening. Banyana Banyana ran out 6-1 winners, with Leandra Smeda, Janine van Wyk, Slindile Ngubane for a brace and Sanah Mollo all making their mark on the scoresheet. Photo: Screengrab of the SABC delayed broadcast 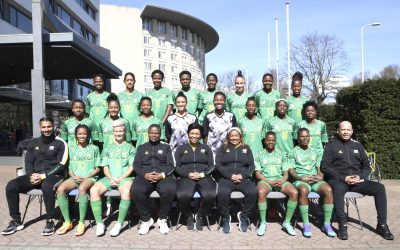