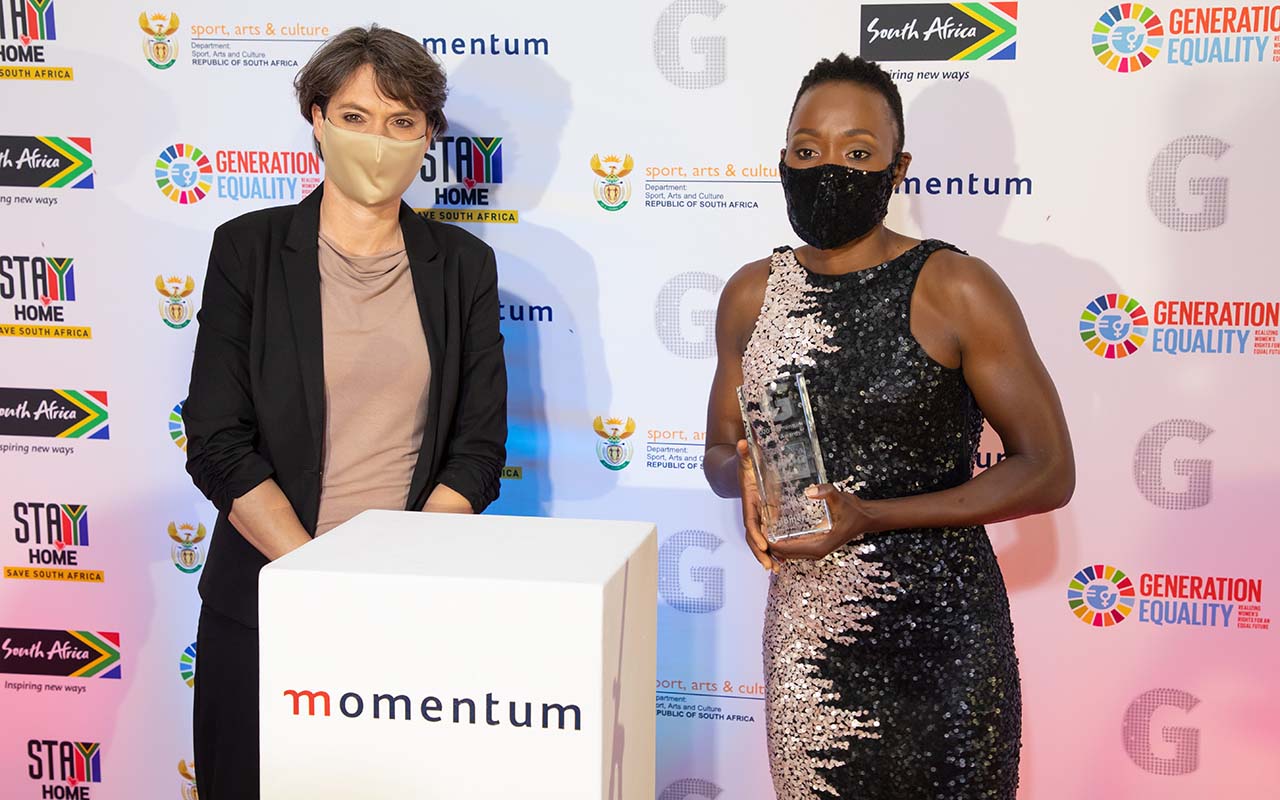 As a country, we rally behind them in numbers; their results and hard work bring the patriots in us together. We put on our regalia, fly our flags high and release our loudest cheers in their names. These are South African teams of women that make history, break records and make us proud. This is what the Momentum gsport Team of the Year Award is all about. This category magnifies a team of South African sportswomen of any age, who have and continue to excel as a unit.

Banyana Banyana is South Africa’s women’s national football team, the pride of our footballing nation. They won the 2020 COSAFA cup making it their fourth consecutive win and their seventh overall. Banyana Banyana has become the platform for the finest South African football stars to showcase their skills on the international stage. While the world of sports was realigning and restructuring their strategies to operate during a global pandemic, Banyana stars were flying the South African flag high by being signed by some of the biggest football clubs in the world.

Speaking on behalf of the team, Team Manager Lauren Duncan said: “All that we do is rooted in passion and a team effort. It is always such a fulfilling feeling being recognized for the work that we put in on the field and in training. Being a finalist for this award is a nod that is very affirming and encouraging to all of us. The results that everyone witnesses on the field is a result of the selfless work that players and staff put into what they do every single day.

“Winning the Cosafa cup was our standout moment, especially after a tough time battling the Covid pandemic and a lot of time away from the field. Preparation for the Cosafa tournament were hampered by a lot of hurdles but our players were never discouraged to gun for the top spot. We thank platforms like the Momentum gsport Awards that make it easy for the team by always magnifying their work, efforts and outcomes. The platform has raised the profile of women’s sports and women in sport in South Africa, and continues to shine a light on our women. We don’t take the work they do for granted. Thank you for seeing us and some of our players who are also finalists, all the best to everyone.”

The South African women’s Water Polo team made history as they represented the country at their first ever appearance at an Olympic Games event in Tokyo earlier this month. Led by a #gsport16 finalist for Coach of the Year, Delaine Mentoor, who was the only female coach for the water polo games at the Olympics. The team came back more inspired, driven and with more hunger to compete at the highest level.

Captain Jordan Wedderburn was elated to hear the news that they have been named as one of the three finalist for the Team of the Year Award; “We are actually just really, really, honoured to even be thought of for something like this. We have never been a finalist, or have ever been nominated or won any award, so this has really shaken us up in a very good way. Recognition like this really puts a stamp of approval on our hard work and we appreciate this so much. We think gsport4girls has done an amazing job in recognizing female athletes and all women in sport in South Africa. They have really changed the game and leveled up the playing field. The Momentum gsport awards have taken so many amazing athletes and exposed their brilliance to the world, it has inspired so much of the younger generation to want to enter the space and continue the legacy.”

Adding on to Wedderburn’s sentiments was vice captain Megan Sileno who thinks being a #gsport16 finalist will encourage others to take the sport seriously.

“We think this is going to be a great stepping stone of our program in the country. Thank you so much for nominating us, this is going to inspire a lot of aspiring water polo athletes to up their game and do their best to be part of the team. Some of our biggest moments have been obviously going to the Olympic Games in Tokyo for the first time in South African history. Our preparations and the work that our management put in has really been astounding. We were able to raise funds for other team members seeing that our team was self funded. Making it to Tokyo was a dream come true for each team member. Our coaches really focused on our mental health and ensured that we are ready to tackle our first ever Olympics, we are so thankful to have the type of leaders we have.”

Rounding up the top three Teams of the Year finalists is the Spar Proteas. In March 2021, the South African National Netball team won the SPAR Challenge Series. They continue to keep up the momentum ahead of major events on their sporting calendar such as the 2022 Commonwealth Games in Birmingham and the 2023 Netball World Cup, which will be hosted on home soil in Cape Town. The team has been on a roll in recent times, including a best ever finish at the 2019 World Cup which saw them win the Team of the Year award at the 2020 Momentum gsport Awards.

Speaking of the determination to keep winning was captain Bongi Msomi: “We are a group of women who are passionate, driven and resilient. The work that we put in through training and friendly games go a long way in making sure we are always prepared and ready for any tournament on our roster. I am so proud of the team and their determination to get better at the game. We have been training and making sure we don’t miss a single beat. It is difficult to keep a level head while dealing with so many challenges posed by COVID 19, but when you are in a team of great women who believe in hard work, you don’t look too far for inspiration.

“The resumption of netball activities last month has really accelerated the game, we are now putting in a lot of hours to make up for the time we lost. We are currently at our training camp, which requires a lot of focus, but we are so thrilled that after winning this award in 2020, we are yet again back as a finalist. We are led, guided and supported by a group of phenomenal women and in this women’s month we dedicate this to every single one of them.”