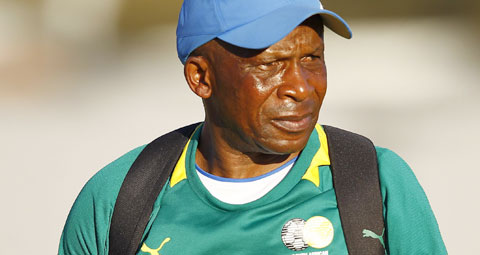 Banyana in Training to Top AWC

With only four weeks left until the 8th Africa Women’s Championship starts in Equatorial Guinea, Banyana Banyana are hard at work in preparation for the tournament. The Ladies National football team began their training camp on 1 October in Johannesburg and Coach Joseph Mkhonza says the most important thing is to prepare the ladies mentally.

“All of the teams in the tournament are strong. They all went through a vigorous qualifying process just like we did. Everyone one wants to win which is why it’s important for us to take our football to the next level,” he says.

Captain Amanda Dlamini agrees. “It will be tough for us especially after the Olympics. Every team wants to show that we are beatable so we can’t underestimate anyone. Every team will be a threat. “

Banyana are in the same group as host nation Equatorial Guinea, Senegal and The Democratic Republic of Congo. The other teams in the tournament are seven time champions Nigeria, Cote d’Ivoire, Cameroon and Ethiopia. Banyana who have never won the tournament are hoping for at least a top 2 finish Mkhonza says. “We want to play in the final. Obviously we want to win but our first aim to make to the final.”

Mkhonza has called up 7 new players to the team and says everyone that has been called up deserves to be there. “Obviously the standard of football in the national team and club level is different but we want to try out different players.”

“But being called up to the training camp does not guarantee a place in the team. We want to see whether the new players can handle pressure.”

This will be Mkhonza first visit to Equatorial Guinea and he and his team of advisers are hard at work trying to prepare the ladies for the kind of climate they will experience in the country he says.

Dlamini has played in Equatorial Guinea before and says conditions will be tough. “It’s very hot and humid and the pitches are different.”

“But the hardest thing to deal with will be the fans. Their fans are very passionate. The last time we played there they shook our bus while we were in it,” the 24-yaer-old striker reveals.

The most important thing for the team to concentrate on if they are to win the tournament is team work Dlamini says. “The most important lesson we got from the Olympics is how important working as a team is. You can’t do anything without your teammates so team work will definitely be the order of the day.”

Dlamini is also unfazed by the amount of pressure the team is under to do well. “I know a lot of people have high expectations of us but we are going to play our normal game. The only advice I have for the players is to enjoy the tournament.”

With lockdown extended for a further two weeks, allow gsport to keep you entertained. We have been spreading the net far and wide to profile women in sport from around the world, to give them a...