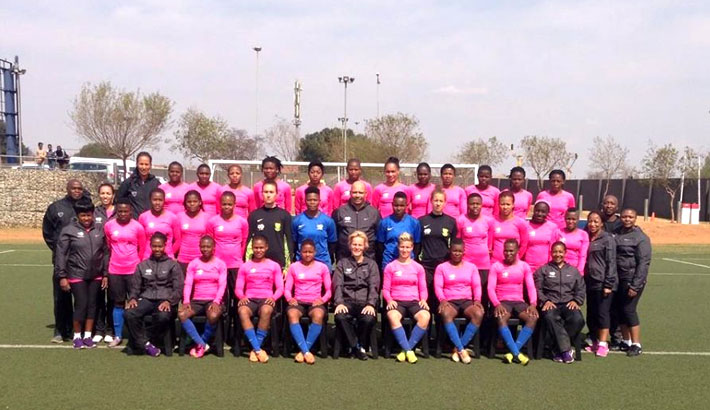 A first-half goal by Shiwe Nogwanya, who plays for Bloemfontein Celtic ladies in the Sasol League and second half hat-trick by veteran striker Portia Modise from Gauteng Sasol League outfit Croesus, sealed the win for Vera Pauw’s charges.

This was the fifth match the Sasol sponsored women’s national team played as part of their preparations for the African Women’s Championships that will be hosted by Namibia from 11-25 October.

The home side enjoyed most of the possession in the opening 10 minutes of the match, putting Banyana Banyana under pressure and forcing them to play in their own half.

Goalkeeper Roxanne Barker made a great save by tipping the ball over in the fifth minute, denying She-polopolo ladies a chance to open the scoring.

In the 22nd minute, Banyana Banyana came close to breaking the deadlock after Simphiwe Dludlu made a cross into the box, but it fell into the Zambian keeper’s hands

Sasol Banyana Banyana opened the scoring on the half hour mark after Nogwanya received a great pass from Refiloe Jane, beating the defenders and scoring from inside the box.

Pauw made her first substitution of the match at the start of the second half, replacing youngster Thembi Kgatlane with Silindile Ngubane.

Banyana Banyana changed the pace of the game in the second stanza, enjoying most of the ball possession.

Modise doubled the score for Sasol Banyana Banyana in the 63rd minute after receiving a hard and low cross from Nogwanya, finishing with an easy tap-in.

Pauw’s charges took charge of the match, with Modise completing her brace in the 73rd minute and a hat trick in the 90th minute ending the match at 4-0.

Sasol Banyana Banyana travel back to South Africa on Monday afternoon to continue with their camp ahead of their next assignment in Polokwane against Tanzania on Saturday, 31 August 2014. That will complete what has been a successful women’s month.

Photo 1 caption: SASOL Banyana Banyana pose with coach Vera Pauw and her administrative team ahead of their departure for Zambia. Pauw selected a powerful team with plenty of international experience, and after the first 20 minutes of the match during which the relatively young Shepolopolo side ran the South Africans around, the confident visitors were in charge of the match, their 4-0 win a shade short of what it could have been. Photo: Banyana Banyana on Facebook

Photo 2 caption: Long-time Banyana Banyana ace striker Portia Modise’s hat-trick proved once pivotal this instinctive talent can be. In this photo, the star popularly known as ‘Bashin’ is pictured talking to local media after her sterling performance. Photo: Banyana Banyana on Facebook