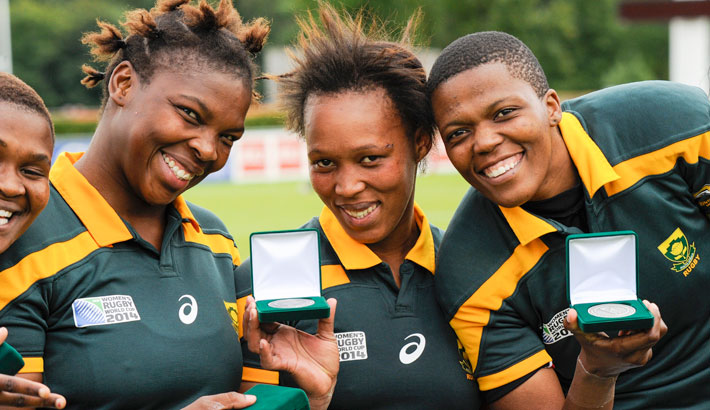 The Springbok Women Sevens on Monday began their preparations for the IRB Women’s Sevens World Series qualifier in Hong Kong from 12-13 September, after assembling in Stellenbosch for a two-week training camp on Sunday.

A total of 16 players were invited to the camp, of which 11 participated in the IRB Women’s Rugby World Cup in France earlier this month.

Centres Marithy Pienaar and Ziyanda Tywaleni, meanwhile, were included in the original 26-member World Cup squad, but were later ruled out due to knee and hamstring injuries respectively.

The team will be reduced to 12 players at the end of the camp, with the touring squad departing for Hong Kong on September 8.

The qualifier will include 12 teams, and should South Africa finish among the top four sides, they will be included in the core group for the 2014/2015 IRB Women’s Sevens World Series. The top four sides at the conclusion of the World Series next year, meanwhile, will qualify automatically for the 2016 Rio Olympic Games.

“We have selected the best available squad for the training camp and with a few players vying for the same positions, there will certainly be tough competition for places,” said Springbok Women’s Sevens coach Renfred Dazel.

“This tournament is of utmost importance to us with an eye on qualifying for the 2016 Olympic Games, so we hope that the competition within the squad will bring out the best in the players,” said Dazel.

“Many of the women are seasoned Sevens players, while others such as Siviwe Basweni and Nwabisa Ngxatu are relatively new in the set-up, so we are excited about this group of players.”

Zoning in on the tournament Dazel admitted that one of the main challenges was that they had only two weeks to prepare for the competition following the Women’s Rugby World Cup.

“We have a busy two weeks ahead to catch up with the other teams because most of our players participated in the World Cup and have had a heavy workload in the last few months,” said Dazel. “But fortunately they had a few days off since arriving in South Africa on Tuesday and they are visibly refreshed. Those who did not participate in the World Cup, meanwhile, followed strict training programmes.

“One could sense the drive among the players to do well in the tournament since Sunday, so we are looking forward to a productive two-week camp.”

Photo 1 caption: Coach Renfred Dazel is excited by the prospects posed by the squad of 16 selected for a 2-week camp in Stellenbosch, of whom eleven have just returned from action at the IRB Women’s Rugby World Cup in France. In this photo, some of the stars among the South African players are pictured receiving their medals to mark their tenth place finish at Women’s Rugby World Cup 2014. Photo: P.Charlier/IRB