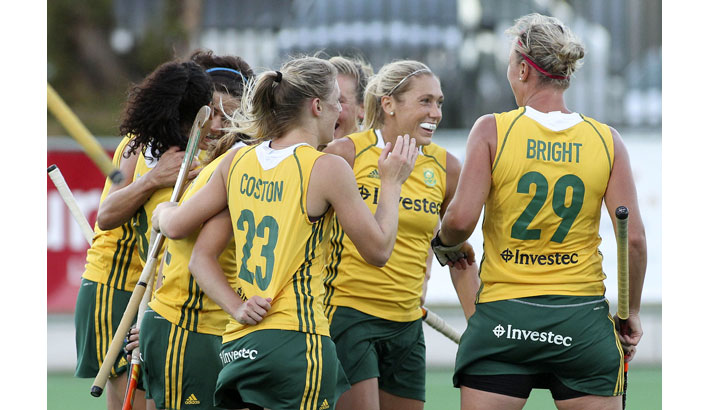 Anouk Raes got Belgium on the scoreboard first with a well-taken penalty corner in the sixth minute, while Kathleen Taylor (32nd) and captain Marsha Cox (35th) netted fine field goals for the girls in green and gold to lead 2-1 at half-time.

Going into the finalé of an exciting series, SA needed only draw to clinch the rubber while it was a must-win for Belgium – and the Europeans signalled their intent by forcing the first penalty corner in the sixth minute – Raes pulling the ball right of the defence to open the scoring.

In the 10th, Louise Versavel found space to win a second PC after SA keeper Phume Mbande’s initial save, but the variation went wide of the far post. Soon after, Sulette Damons could have made more of an opportunity.

The SA defenders did well to get their team out of trouble at times and in the 19th Lisa Deetlefs rifled a 30-metre diagonal pass from the left to striker Dirkie Chamberlain, whose full-stretch, diving deflection deserved more reward.

Stephanie van Borre had a great chance at the other end before Coetzee speared a perfectly-weighted through-ball for Lilian du Plessis to win SA’s first PC, which also failed to reap a dividend.

Galvanised by the crowd, Cox attacked the space before feeding Chamberlain, whose snap shot was superbly stopped, keeper Aisling D’Hooghe replicating the reflex save from a strong shot by Tarryn Bright off SA’s first PC soon after.

Chamberlain – so strong on the ball – shrugged off intense Belgian attention in the 32nd minute to set up Taylor’s crisply-struck equaliser – and it might have been a brace for the double Olympian a minute later.

The home crowd forgot that disappointment in the dying seconds of the half when Cox netted a beautiful goal, cracking a rising shot into the far corner for SA to go 2-1.

Coetzee came close a couple of times after the changeover, while Bernie Coston was outstanding in relieving pressure through a determined back tackle.

In the 50th a low Coetzee drag-flick from SA’s fourth PC was stopped by the in-form D’Hooghe’s outstretched right leg – and excellent inter-play between Coetzee and Cox put Russell through, but the advancing keeper summed up the threat perfectly. Five minutes later Mbande did the same from Judith van der Meiren.

Belgium earned their third PC with 10 minutes left but Anne-Sophie de Scheemaekere’s powerful, low drag-flick whistled past the wrong side of the post. Soon after (64th) a well-struck cross evaded the SA defenders and Vos restored parity.

Deetlefs made a critical tackle near the end to avert further danger, and SA had a Test series win safely tucked up.