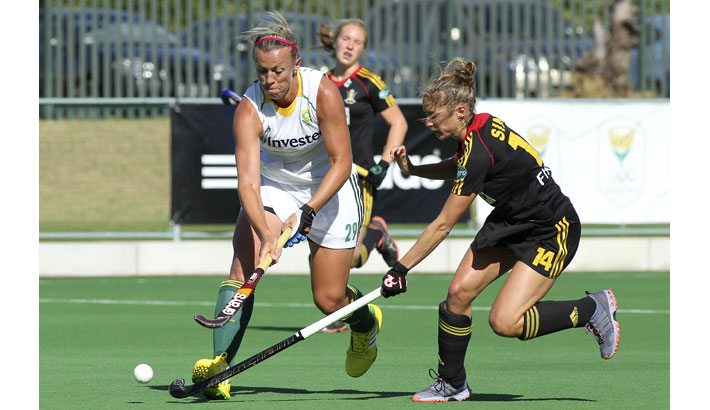 Belgium, desperate not to lose, fought back to draw the fifth Test 1-1 with a dominant Investec South Africa women’s hockey team, at Hartleyvale Stadium in Cape Town on Sunday, after the score was 0-0 at half-time.

Pietie Coetzee opened the scoring from the penalty spot for SA to go 1-0 up in the 57th minute.

It was the world record goalscorer’s 279th successful strike in 280 Test matches. SA should have scored more – and their below-par finishing kept the Belgians in the game, allowing the Europeans to keep the series outcome alive when Stephanie van den Borre rounded off a wonderful move nine minutes from the end (61st).

The six-Test series now stands at 2-1 to SA with two drawn. The sixth and final Test is at 7pm Monday. A win for Belgium Monday will see them share the series, while a draw will be enough for SA to take the rubber.

If SA had won, they would have clinched the series, while a win for the Europeans would have left the series open for either side to win in the final match.

Both sides started in enterprising mood and made frequent incursions into the strike zones but the key moment in the opening quarter-hour saw Shelley Russell bundled off the ball, which resulted in the first penalty corner after 13 minutes. Coetzee’s drag-flick was repelled by keeper Elena Sotgiu.

In the 16h Sulette Damons showed tremendous pace down the right wing to outstrip the defence. However, her quality layoff to Kelly Madsen was not converted into something tangible on the scoreboard.

Hardworking SA midfielder Tarryn Bright – the double Olympian playing in her 250th Test match – was always alert to the early pass and South Africa’s ability to string exciting moves together down the right saw Coetzee get in a half-shot that Sotgiu covered.

Quanita Bobbs, still only 20, continued to impress in her new position at left half with exemplary control and distribution under pressure.

In the 22nd minute Belgium captain Charlotte Vos brought a good save out of Hanli Hattingh and the keeper did the same from Belgium’s first PC – a solid drag-flick by Anne-Sophie de Scheemaekere.

The Europeans’ fightback continued with PC numbers two and three. Louise Cavenaile breached the defence with the latter, but the “goal” was disallowed.

Illse Davids, tireless captain Marsha Cox and Damons put together another promising move two minutes from the break but the teams went into half-time 0-0.

SA continued to carve holes in the Belgians’ defensive screen, and Damons, Davids as well as Kathleen Taylor came close to opening the scoring, but it was in the final pass or the finishing that the South Africans were coming short.

Taylor managed to get off a shot with 22 minutes left and a minute later Bernie Coston was brought down heavily by Judith van Meiren in the 23-metre area. However, South Africa’s second PC came to nought.

A tense affair, with so much at stake, Marcelle Manson, Lisa Deetlefs and Nicolene Terblanche did well to steer SA out of trouble on occasion but a Belgian went down heavily shortly after and the Europeans were awarded their fourth PC, Coston as first-wave defence blotting out the threat.

Coetzee then stroked a 30-metre through ball that was picked up by the high-lying Lilian du Plessis. Umpire Wanri Venter had no hesitation in awarding a penalty stroke when she judged the striker had been impeded and Coetzee made no mistake from the spot for 1-0 in the 57th minute.

With eight left, midfielder Madsen speared a great pass to Du Plessis in the strike zone but the frontrunner was unable to control the ball. In the 61st Belgian conjured up a beautiful move out of deep defence. Anouk Raes freed up Emilie Sinia, who crossed from the right for Van den Borre to equalise in spectacular fashion (1-1).