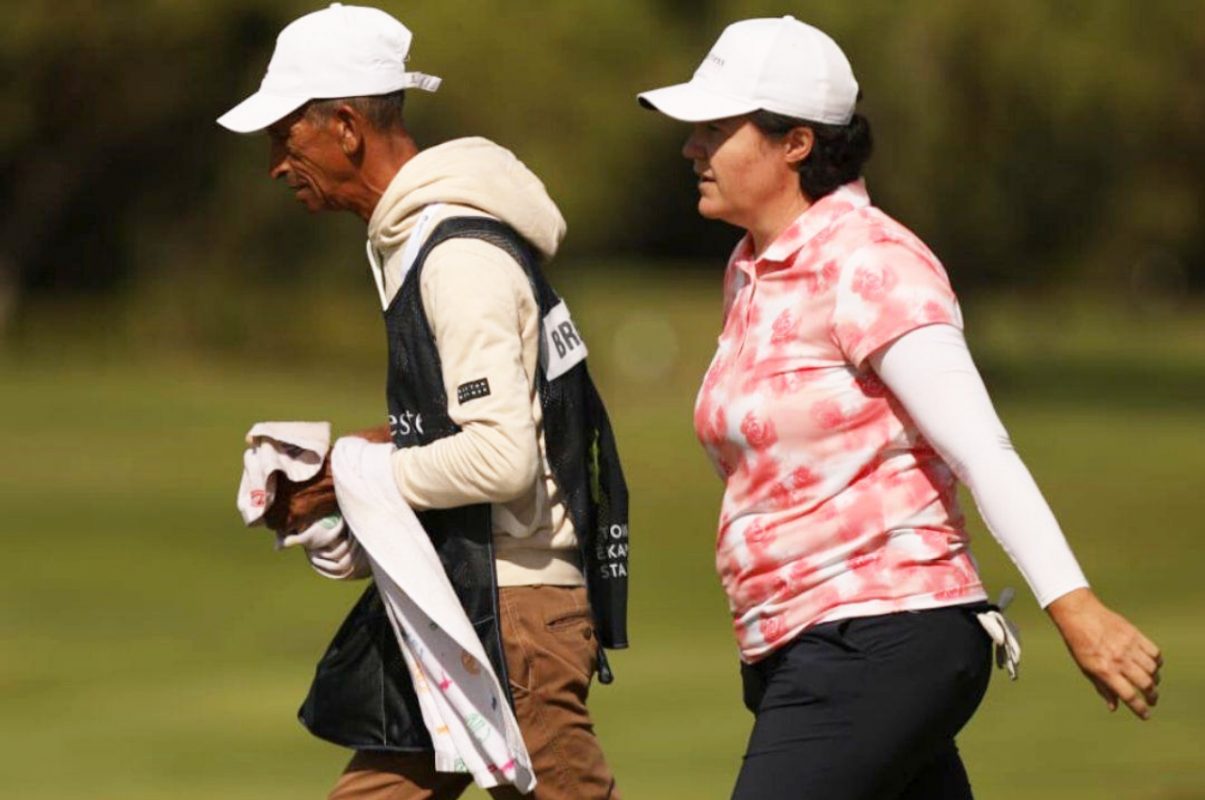 Wales’ Becky Brewerton opened a yawning gap on the field with a sizzling six-under-par 66 on Day 2 of the Investec South African Women’s Open to put herself in a commanding position in the City of Cape Town on Thursday, 31 March 2022.

The two-time Solheim Cup star rediscovered the sort of form that saw her win the Order of Merit back in 2009 on Thursday, and fired six birdies in a flawless round at Steenberg Golf Club to set the 36-home target at seven under par.

The incredible round marks a fantastic turnaround for Brewerton, who was on the verge of quitting the sport altogether after a tricky last few years.

The 39-year-old only regained her Ladies European Tour (LET) card in a terrific comeback performance at the December Qualifying School last year, and she has certainly made the most of that reprieve as she dealt best with the windy weather to help herself to a resounding four-shot lead.

“I’ve done nothing but practice my punch shots since I’ve been here. Every shot I’ve hit on the range has been a cut or straight arm finish to try and keep the ball low,” Brewerton revealed.

“Even this morning when we didn’t have the wind for the first 12 holes, I was still using that shot because now the ground is wet after yesterday’s rain, so you’ve got to get good ball connection and drive the ball forwards. I’m going to stick with that because it worked really well today.

“It was nice because there was no stress at all, I hit a lot of greens and fairways which hasn’t always been the case over the years. It was a nice feeling and I’m enjoying playing well again.”

Brewerton reeled off seven straight pars from the 10th before picking up three shots in as many holes between the 17th and the first to begin her steady climb to pole position.

And despite the conditions getting tougher as the breeze gained momentum in the afternoon, the Welsh golfer was unaffected. She birdied the fourth and fifth to put daylight between herself and the rest of the field and another perfect tee shot on the seventh set up another birdie chance on seven.

Her best 18-hole score on the LET since December 2014 puts Brewerton in line a first victory in more than a decade and it’s one that comes with a big reward – winner’s status exemption on the LET until the end of this season and the next.

“It’s a really weird feeling, because three or four years ago, or even last year, I wasn’t sure if I would be playing anymore,” she admitted.

“Even after two days at Q-School in December it was all looking over I was thinking about what jobs I would be getting at home, but then it all came together. It’s been a lot of hard work and I’ve got a lot of people to thank for keeping me going.”

The Argentine golfer couldn’t capitalise on her position at the start of the day and fired a one-over-par 73 to finish on three under.

“I think my game was better today, because I felt I played better golf, but I just struggled on the greens,” the 22-year-old Olympian.

“I gave myself a lot of chances, but I just didn’t make a lot of putts. It was struggle on the greens to read the breaks, and with the wind it was more difficult than yesterday, but overall I think I played pretty good.”

Felicity Johnson from England and France’s Anne-Charlotte Mora find themselves in a tie for third on two-under after carding respective rounds of 71 and 72, while last year’s runner-up Leonie Harm finished in a three-way tie for fifth.

The German closed with a round of 71 to join Norway’s Maiken Bing Paulsen (70) and Josefine Nyqvist from Sweden (74) on one-under.

The defending champion posted a 73 and Alexander bogeyed her last hole for 72 to tie for eighth on level-par with England’s Thalia Martin (69), Agathe Sauzon from France (70) and last week’s Joburg Ladies Open champion Linn Grant from Sweden, who registered successive rounds of 72.

Alexander was pleased with her round as she dealt admirably with the trickier afternoon conditions.

“It was really tough, because I struggle with these greens, but I made a lot of par saves from some silly mistakes,” the 22-year-old LET campaigner said.

“I think my expectations were a lot higher than what the conditions were willing to give, especially the back nine setup. I was a bit disappointed with the finish, but overall I’m happy. It’s a very tricky golf course. It’s wide off the tees, but the greens are very tricky, and the wind here in Cape Town makes it quite tough. They are difficult to read. Going into the grain doesn’t mean it’s slow and going with the grain doesn’t make it fast. I think getting the hang of that is important and you’ve got to really trust your lines because they’re tough to read.”

The second round also produced two aces, with Charlotte Liautier holing out on the 135m 17th with an 8-iron, while Julie Berton found the cup from the 14th tee box with her 6-iron from 156m.

With the cut falling at six-over, a total of 66 players made the cut to continue into the final two day’s action, including three amateurs and all members of the GolfRSA National Squad.

GolfRSA No 2 Gabbi Venter, who beat Streicher in an eight-hole playoff for the Western Province Women’s Amateur title on Sunday, and won the qualifier on Monday, sits at five over.

The trio will battle it out for the leading amateur position and the honour of lifting the Jackie Mercer Trophy on Saturday, standing alongside champion golfer of the 2022 Investec South African Women’s Open.

Photo 1 Caption: Wales’ Becky Brewerton opened a yawning gap on the field with a sizzling six-under-par 66 on Day 2 of the Investec South African Women’s Open to put herself in a commanding position in the City of Cape Town on Thursday, 31 March 2022. Photo: Sunshine Ladies Tour