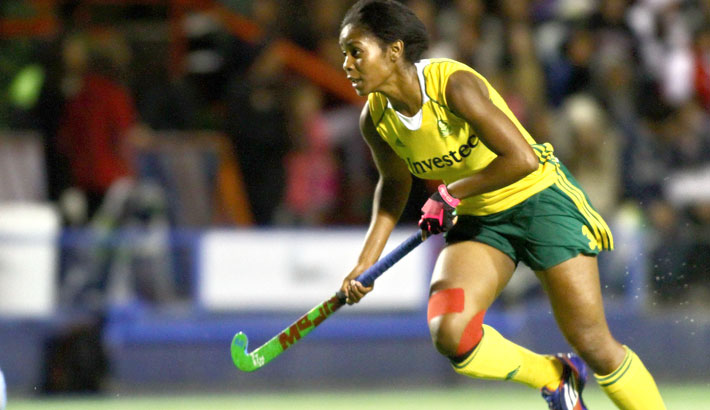 The national women’s hockey team go into their second Group B match at the World Cup in The Hague, Holland, on Tuesday, tackling world number six Germany at 10.30am on the Kyocera Stadium.

The world’s 11th ranked Investec SA women will welcome back super-fast striker Sulette Damons after the Graaff-Reinet born and bred sharpshooter sat out Sunday’s opener against reigning world champs Argentina, which the girls in green and gold lost 4-1.

Resting what Damons described as “just an injury niggle” was a wise precaution, as SA go into their remaining Group B clashes where they will have a more realistic chance of picking up log points.

Head coach Giles Bonnet said SA defended well in the first half against Argentina while in the latter part of the second half the South Africans brought the ball forward in promising fashion, “But [fusion_builder_container hundred_percent=”yes” overflow=”visible”][fusion_builder_row][fusion_builder_column type=”1_1″ background_position=”left top” background_color=”” border_size=”” border_color=”” border_style=”solid” spacing=”yes” background_image=”” background_repeat=”no-repeat” padding=”” margin_top=”0px” margin_bottom=”0px” class=”” id=”” animation_type=”” animation_speed=”0.3″ animation_direction=”left” hide_on_mobile=”no” center_content=”no” min_height=”none”][we] weren’t able to create enough out of the possession we had in and around the circle. It’s an area in which we have got to keep improving.”

The SA women had no active training Tuesday and should be hungry to face the Germans, who weren’t convincing in their 1-1 draw with China.

Bonnet will also be looking to see an improvement in winning penalty corners on Tuesday, with none won agaist world champs Las Leonas on Sunday, a worrying aspect which negates South Africa’s strength in this facet of play.

Main Photo Caption: After resting Sulette Damons for an “injury niggle” against Argentina, coach Giles Bonnet is set to start the fleet-footed striker against Germany in their second FIH Rabobank World Cup tie in the Hague this morning. Photo: Rodrigo Jaramillo

Video Credit: Highlights of the opening Group B fixture for reigning world champions Argentina and South Africa, at the Rabobank FIH World Cup 2014 in the Hague, on 1 June, 2014, courtesy FIH hosted by Youtube