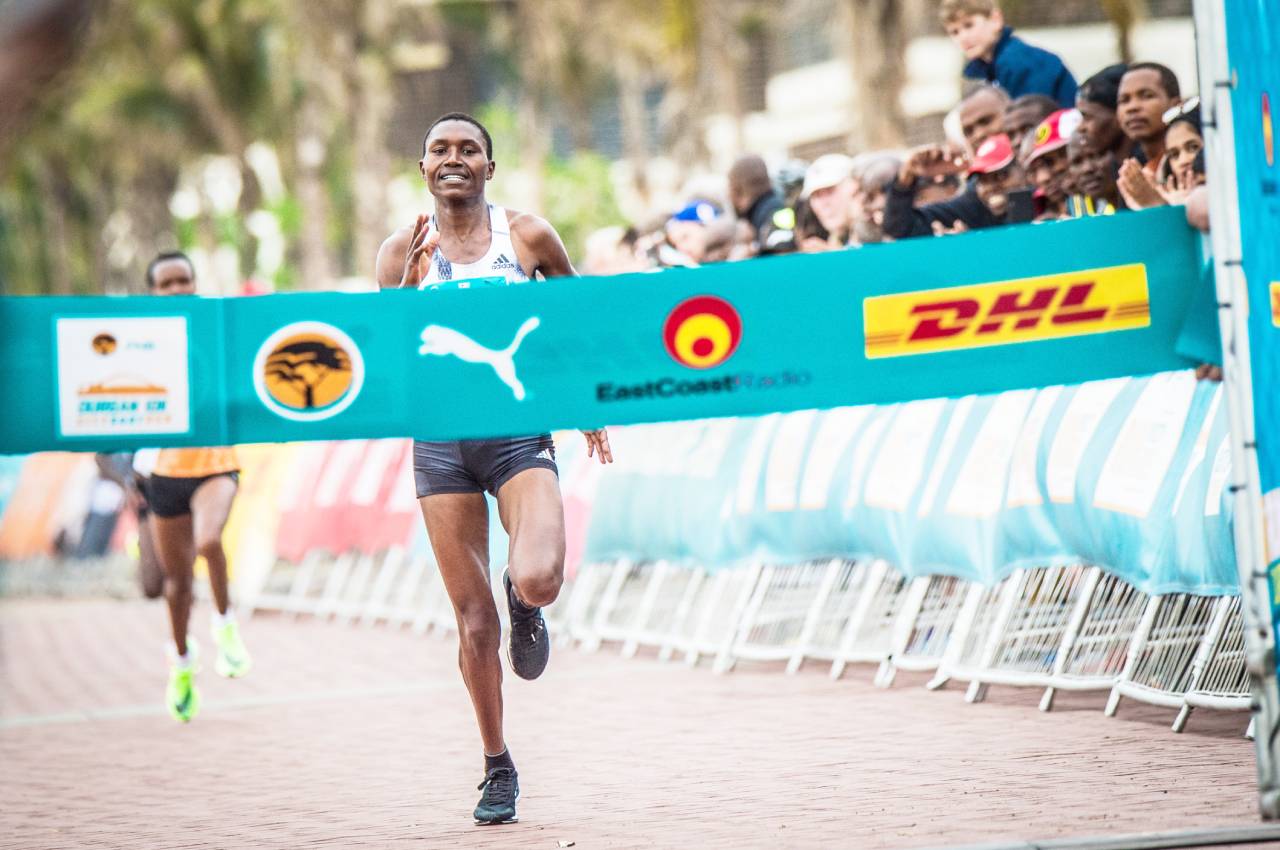 She came, she saw, and she conquered in emphatic fashion! The fastest women in the world in 2019, Kenya’s Sheila Chepkirui, lived up to her billing as race favourite for the 2019 FNB Durban 10K CITYSURFRUN on Sunday 13 October 2019, when she took four seconds off the South African All Comers record to win in 30:55.

Chepkirui was bullish and confident on the start line making it clear that she was here to run fast, and the gusting wind was not going to deter her.

True to her word, she, Evaline Chirchir and Beatrice Mutai went straight to the front of the race and drove the pace of what is arguably the strongest ever field assembled in South Africa. With five women under 32 minutes, one of whom has gone under 30 minutes and one under 31 minutes and a further four under 33 minutes, the women’s race was always going to take center stage.

Chirchir and Mutai took the pace setting duties from the gun, with Chepkirui tucked in behind and Ethiopia’s Tadu Nare right on their heels. But Nare’s brave attempt to stick with women running at 3:06 per kilometer faltered by the 3km mark. Thereafter it was the three Kenyans who drove proceedings.

Chepkirui allowed Mutai and Chirchir to lead and ran cleverly, staying behind the pair for most of the race. After 5km came and went in 15:26 with the trio not letting up on the frenetic pace. At 7.2km, run in 22:24, Chepkirui first made her presence felt and barged between Chirchir and Mutai.

“I am really happy with my performance, especially the fast time, as this is my first road race in South Africa.” – 2019 FNB Durban CITYSURFRUN winner, Sheila Chepkirui

At 8.5km, Chepkirui threw in another surge and Mutai started to fade, but it was only in the final 500m that Chepkirui was able to open daylight between herself and Chirchir. Chepkirui, who on 7 September ran 29:57 for 10km – the fastest in the world this year and the second fastest ever – had too much speed for Chirchir who had run 66:22 for a half marathon only a month ago. Chepkirui came home in 30:55 ahead of Chirchir (30:57) and Beatrice Mutai (31:01). First South African across the line was in form Glenrose Xaba who took 14 seconds off her personal best, by finishing fifth in 32:45.

“I am really happy with my performance, especially the fast time, as this is my first road race in South Africa,” said Chepkirui. On her tactics, Chepkirui said she is not a front runner. “I usually stay at the back in the beginning and then make my move closer to the race finish.”

“I am very happy with my race today, especially as it is my personal best,” says Glenrose Xaba. “The beginning of the year was very tough for me as I had many injuries. But now I am healed, and it is all coming together.”

“FNB would like to congratulate and express our sincere gratitude to our customers, families and athletes who took their time to partake in this highly competitive race in Durban. It’s great to see our runners demonstrating their commitment and endurance to the race each year.  As we end of 2019, we look ahead and welcome you again in 2020 for another exciting instalment of the FNB Run Your City Series,” says Bonga Sebesho, Head of Sponsorships at FNB.