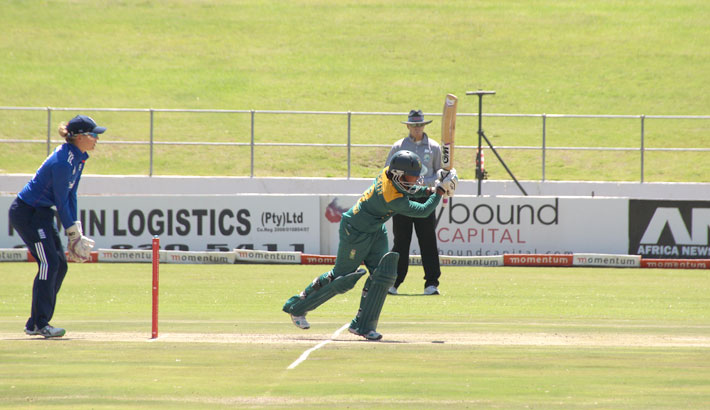 Chetty Stars in Losing Cause for Momentum Proteas

A career-best 90 from Trisha Chetty was not enough as the Momentum Proteas slipped to a seven-wicket Duckwoth-Lewis loss against England in the first match of their three-game One-Day International (ODI) series at Sahara Park Willowmoore on Sunday.

Playing their first competitive game for their country in close to 11 months, the South Africans made 196 all out after winning the toss and batting first.

England then chased down a revised victory target of 150, twice adjusted after rain delays, with 39 balls to spare.

Opener Chetty was the cornerstone of the hosts’ innings as she comfortably past her previous best score of 76* against Bangladesh at Centurion back in 2013. Fellow opener Laura Wolfvaardt, making her debut at the tender age of 16, put on 26 for the first wicket before she fell for 5. The teenager was one of four wickets for Player of the Match Anya Shrubsole, who claimed 4/29.

Captain Mignon du Preez (38) and Chetty then provided the hosts with a splendid platform thanks to their 93-run, second wicket stand. The skipper eventually fell with the total on 119 – Shrubsole claiming wickets off successive deliveries to jolt South Africa’s progress. Her other wicket was Marizanne Kapp (0) and the loss of those two key wickets knocked the home side’s confidence.

Although a tiring Chetty, who suffered cramp along the way, kept going, her 122-ball innings (9 fours), eventually ended when she edged Heather Knight behind to Sarah Taylor leaving the Proteas women all out with four balls to spare.

England captain Charlotte Edwards (33) was bowled by Marcia Letsoalo (1/20) after the delay, but Taylor’s unbeaten 41 and Knight (26) took the visitors home following a second delay that lasted just under an hour.

The second match of the series takes place at SuperSport Park in Centurion on Friday.

Photo 1 caption: Proteas opening batter Trisha Chetty hit a career-best ODI innings of 90 before edging Knight to keeper Sarah Taylor. Chetty displayed tenacity after she was struck with cramps in the 70’s, but played on through the pain to give the hosts something of a defendable total. Photo: gsport

Photo 3 caption: The two runs needed to mark her 1500 milestone was a brief precursor to Momentum Proteas skipper Mignon du Preez’s classy innings contribution of 38 runs to the cause. Photo: gsport

Photo 4 caption: Sarah Taylor showed her batting potential, freely scoring boundaries all around the wicket in a quick-fire 41*. England’s winning runs came from her bat, a carefree lofted four to mid-off, a player in ominous form from the hosts’ perspective. Photo: gsport

Photo 5 caption: Anja Shrubsole was awarded the Player of the Match award following her match-winning contribution of four wickets for 29 runs in her 10 overs. Photo: gsport