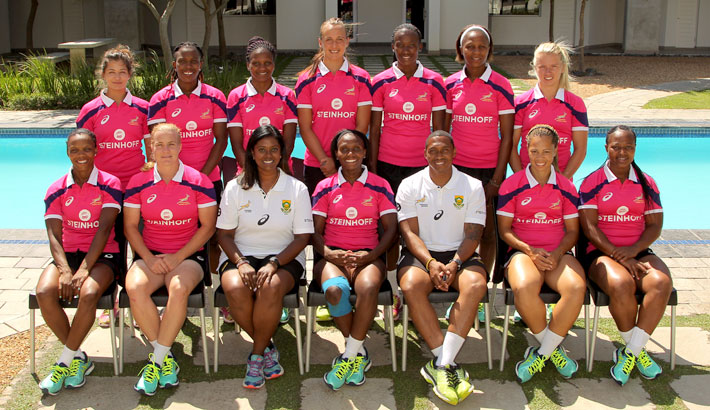 SA Select Women’s coach Renfred Dazel on Friday introduced fresh faces to his squad for the Las Vegas Invitational from 3 to 6 March as he looks to expand the depth in his squad this season.

Libbie Janse van Rensburg and Nadine Roos from the Blue Bulls, and Eastern Province’s Unathi Mali, who were invited to the Springbok Women’s Sevens trials in November last year, will make their first appearance for the SA Select team next week. Roos and Mali have been training regularly with the squad this year, while Janse van Rensburg joined the squad earlier this week.

Chané Stadler, Lamla Momoti and Nomsa Mokwai, who featured in the Emirates Airlines Dubai Rugby Sevens in December, have also been included in the squad.

Veteran Springbok Women’s Sevens player Lorinda Brown will lead the team in the absence of regular captain Zenay Jordaan, who has a thumb injury, while Rachelle Geldenhuys will take over the vice-captain duties from Marithy Pienaar, who is recovering from a leg injury.

“We have made a concerted effort to increase the depth in players within the squad and it has been pleasing to see what some of the new players have to offer,” said Dazel.

“Libbie, Nadine and Unathi impressed us with their performances in the SA Rugby Women’s Interprovincial Sevens last season, while Nadine and Unathi did well at the Springbok Women’s trials and in the friendly matches against Brazil. Their attitudes have also been good, so I am delighted to welcome them all to the team. This will be a tough test for them, but I have faith in their abilities.

“Chané, Lamla and Nomsa have also continued to work hard since the Dubai Invitational and it is pleasing that they have again made the cut for the Las Vegas Invitational.”

The SA Select team will face a mixed international team, Stars Rugby 2, and Brazil in the pool rounds on Thursday 3 March before taking on the USA Select 7s in their final pool match on Friday. The play-off stages will commence on Friday and will run concurrently with the men’s HSBC World Rugby Sevens Series tournament until the final day’s play on Sunday, where the champions will be crowned.

Dazel was pleased with the team’s preparation for the tournament and said: “The players have been working hard on their conditioning and game plan, and their enthusiasm at training has been fantastic, so I am satisfied with our form going into the tournament.

“The matches against Brazil gave us a good idea of the areas of our game we had to work on, so our focus in the last few weeks has been on improving the effectiveness of our attack and tightening up our defence.”

The SA Select Women will depart for Las Vegas on Sunday.

← Nadine's back and you're gonna be in trouble! Momentum Proteas Take On Windies ahead of World T20 →