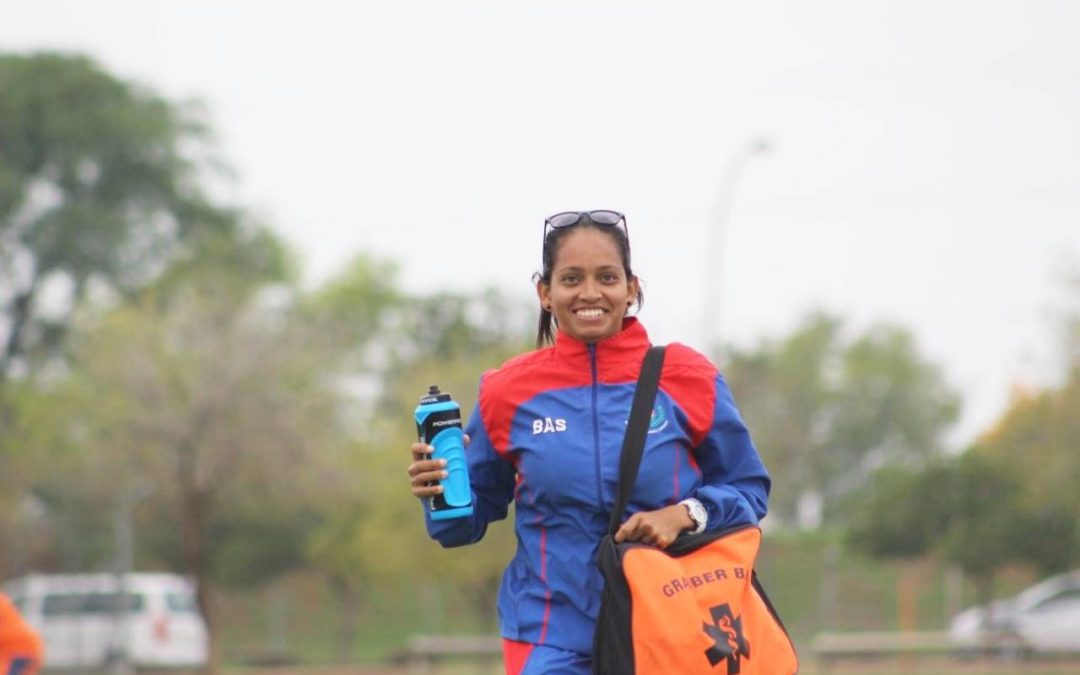 Gabi-Lee Van Der Westhuizen’s passion to mentor and guide women cricketers has seen her play a vital role in the development of the Western Province Women’s Cricket team.

As a Sport Scientist, teacher and sports administrator, Van Der Westhuizen graduated with an Honours Degree in Sport Science from University of Western Cape and is currently studying towards her Masters Degree with a focus on mental skills training, sport and coaching.

As manager of the Western Province U19 & Senior Women’s teams, Van Der Westhuizen believes in creating a culture of professionalism within the women’s game which she states is still in its adolescent phases.

She plans to promote that cause within the programmes that she has designed to help grow the minds of players in becoming professional both mentally and physically.

Speaking to gsport member, Selina Munsamy, Van Der Westhuizen chats about her journey and her aspirations to go global.

Gabi, how has the COVID-19 outbreak affected you?

I was visiting my family in George for the school holidays and ended up staying here for the duration of lockdown, so I have not been home in more than a month. Though, it’s tough not to be in my own space, I am enjoying the family time out here, and keeping up with my daily routines.

As for work, being a teacher I have had to make sure I am well prepared for the return of school at any given point, but to also supply my learners with some activities and exercises to stay fit and healthy, and also ensure we cover the curriculum in the meantime. As for cricket, I have been working on our periodisation training program for the upcoming season, so we are also prepared to start when the time comes.

I enjoy what I do and that I have the opportunity to work with professional women cricketers. I think what makes me unique is my ability to employ mental skills training into daily work and specifically into high performance sport while maintaining the physical training and conditioning components as well.

Over the years I have equipped myself with the knowledge and skills to train individuals with the necessary skills, besides their sport’s specific skills, that they need to perform. I can identify areas that need attention and improvement and I work extremely hard on building relationships with these individuals.

I believe that in cricket, especially women’s cricket, we need to acknowledge that the profession is still in its adolescent phase, and that much work is still needed to be done to create a culture of professionalism.

My work and abilities to promote that cause is within the programs I’ve designed to help and grow the minds of our players in becoming professional. It takes more than just physical skills to play sport; individuals need the physical and mental skills to perform at the highest level.

I believe players need to be managed and have an outlet that allows them to reflect and be better; a space where they can learn and take accountability over themselves. These are skills that is not only needed in sport, but in day to day work and situations. These principles have not opened my eyes to only what these players need, but to how I can be better myself in my work.

As Manager to the Western Province U19 & Senior Women’s teams, what challenges have you faced and how have you overcome them?

In the beginning, I was only 22 years old when I started with the seniors. Fresh out of University. It took hard work and lots of time to build relationships with the players. It was challenging for a long time having to manage and understand the many lives and personalities of the players in the team; especially when players moved, we gained new ones and lost a few close ones.

When I look back at that journey, I love them (all of them) even more than I did when I started because I understand them. After being there for 8 years now, I think I have earned the respect of the team and especially those that were/are older than me.

As for the U19s, they call me Ms V…and somehow the seniors do too. They are so passionate about cricket, but with passion you need work, and they know when they see Coach Claire (Terblanche) and I, they are going to work. This stems down from the seniors to the juniors.

A few challenges that I have faced is mostly around trying to teach/mentor our post-matriculant/university players (so players between U19 & seniors) how to manage themselves. As both institutions can be demanding, creating a systematic schedule that suits both the player’s academics and cricket, as well as motivating them to acquire the energy to follow it, is extremely difficult. However, I myself have to manage my time, between school, cricket and studies. So, I try my best to have the utmost patience and empathy to motivate them as much as possible.

How have things changed for women in sport in SA and around the world?

I think that the world has been so consumed by the idea of how sport should be played based on how men play it. I think when the 2017 ICC Women’s Cricket World Cup was aired on TV, people got a real taste of how amazing women are at cricket. People always thought women can’t bowl or bat, until they could see it.

Same with the FIFA Women’s World Cup. As football is one, if not the biggest sport in the world, many sit with the perception of the men’s format and style. But once, we started seeing how incredible these women are, the perceptions started changing. Performances that we were witnessing, gave us real emotions, like anxiety, and joy. I think the media plays a huge roll in the exposure of women’s sport and from where we were, a great deal of that perception has changed for our women. Sponsorship, contracts, adverts etc, are much deserving for our ladies, they can support themselves and their families with that kind of respect and appreciation for their abilities. They deserve to make a career out of it.

In terms of social media coverage for women sports has this aided in a greater following and demand for more televised coverage of major women’s sports?

Most definitely, as mentioned before, the media and particularly social media play a huge roll in the exposure of women’s sport. We will only fully appreciate and demand the coverage of women’s sport once it receives the same exposure as the men’s formats. More coverage creates the demand for more excellence from the teams and athletes, and by what I have seen, they are already working and doing their best, they just need the platform.

What has been your most memorable moment in female sports?

Internationally, I actually don’t have many; I enjoyed Maria Sharapova beating Serena Williams in the Wimbledon final 2004 (I wanted the underdog to win). But now I enjoy and admire Serena’s dominance of the game. Her achievements are absolutely remarkable.

A little closer to home, the 2014/2015 Women’s National Cricket Week final was something really special. We clinched the title over Northerns by 10 runs. There was nothing like that emotion. The character of the team was out of this world. We all cried because we thought the game was lost, but the girls were determined and got the job done.

Where do you see yourself and women’s sport in 5 years?

Hopefully, I will be a specialist in conditioning (physical training and mental training) with my Masters Degree. I am not sure I would then start pursuing a PhD, but I’ll cross that bridge when I get there. Additionally, I would like to have broken into the National/International Women’s cricket set-up and get involved with improving the systems to aid in high performance growth and excellence.

Favourite sports team and why?

Liverpool all the way – been my team since I was 8. My mom’s team as well, and my dad was an Everton supporter. Pretty awkward haha. But I have enjoyed their style for as long as I remember. Other teams include the USA Women’s National Football team and the Dutch Women’s Hockey team, I thoroughly enjoy their work ethic, culture and dominance.

Who is your iconic sports personality and why?

Roger Federer – watched him his entire career. I admire his mental strength and calmness. Never gets angry, never shows frustration. He is so humble and more in love with his job than the success it brings him. 39 years old and still number 3 in the world, a true champion of sport – he plays because he loves the game and the opportunity to play it. He is pure class to the sports institution, and I admire his character.

A little more local, I am a big fan of our WP captain Alexis Le Breton; I think I associate her much with Federer, very classy professional and full of character.

Favourite things to do on your days off.

Watch football, haha. I enjoy hiking, having braai’s and just being outside with my friends, but I also love napping and being at home.

This is so difficult, I have so many favourites. Actors, probably Johnny Depp and Sandra Bullock.

What is one quote that inspires you?

“He who controls others may be powerful, but he who has mastered himself, is mightier still.” – Lao Tzu

Photo 1 Caption: Gabi-Lee’s passion to mentor and guide women cricketers has seen her play a vital role in the development of the Western Province Women’s Cricket team. Photo: Supplied
Photo 2 Caption: As a Sports Scientist, Teacher and Sports Administrator, Van Der Westhuizen graduated with an Honours Degree in Sports Science from University of Western Cape and is currently studying towards her Masters Degree with a focus on mental Skills Training, Sports and Coaching. Photo: Supplied
Photo 3 Caption: As Manageress of the Western Province U19 & Senior Women’s teams, Van Der Westhuizen believes in creating a culture of professionalism within the women’s side of the game which she states is still in its adolescent phases. Photo: Supplied