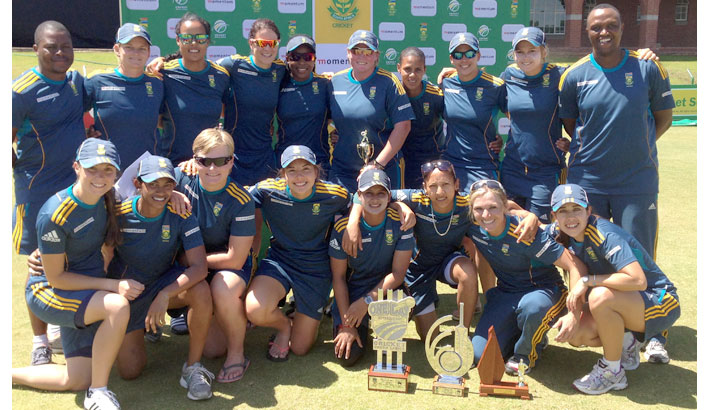 Cricket South Africa (CSA) on Monday, announced the 14-strong Momentum Proteas women’s squad that will compete in the ICC Women’s World Twenty20 in Bangladesh from 23 March to 2 April 2014.

There are no surprises in the final squad, which suggests that coach, Hilton Moreeng has been working on getting the right combinations during the team’s last few international series.

“We’ve been working on a formula with the team selected and it has reaped good results for us in the past,” Moreeng said. “The selected players have more than what it takes to win a World Cup. The standard of play they have shown in the recent past proves that, and the determination they have to achieve that goal is second to none. Gone are the days when South Africa was grouped along with the bottom tear countries in women’s cricket.”

The number of countries participating in the competition has increased from eight to 10. South Africa, who will be lead by Mignon du Preez will face Australia, New Zealand, Pakistan and Ireland in Group A. While Group B, comprises England, West Indies, Sri Lanka and, for the first time ever, hosts Bangladesh.

South Africa, who recently finished a triangular series in Qatar against Pakistan and Ireland will be happy to have played at least two of the teams in their group.

“It’s definitely going to be a tough competition for us and we won’t be taking anything and any team for granted,” Du Preez said. “Having played and lost to Pakistan in the final of the T20 series in Qatar, we know how dangerous they can be.

“Australia and New Zealand are in the top four countries in the world, we will always adopt the wary approach when playing them. They are not unknown to us however, we have played both sides before and there is definitely no intimidation factor,” said Du Preez.

“Ireland have the ability to surprise any team that will take them lightly, so we will definitely give 110% every time we play, no matter who the opposition is.

“Playing in any World Cup is a huge honour for any player and we can’t wait to get our campaign off to a good start. We have the team that can take us far in the competition and we will look to take it a game at a time when we arrive in Bangladesh,” she concluded.

CSA Chief Exec, Mr Haroon Lorgat believes the team have done what is needed to reach the top and extended his well wishes to the side.

“The ICC World T20 event is the only global cricket event that brings together the world’s best men and women cricketers in a joint event and as such it is the most important event in which our national women’s team takes part,” he said.

“This tournament notwithstanding, we have focused on the development of women’s cricket in South Africa. Our team has had a busy season playing and winning home series against Bangladesh and Sri Lanka, and then competed in an away tournament in Doha where they achieved highly credible results.

“We cannot predict how they will perform at the World T20 event, but I can confidently say that the team has had excellent preparation and they have made big strides in appreciating the standard of competition needed at international level. We want them to become a competitive force in world cricket,” he continued.

“The development of women’s cricket has not been limited to events on the playing field either. Extending one of our major commercial partners, Momentum, as the dedicated sponsor for Women’s cricket has been fantastic.

“This sponsorship symbolises an important advancement for women’s sport in our country as it has allowed us to centrally contract our coach and national women’s players.

“We wish Coach Hilton Moreeng, captain Mignon du Preez and all the players and support staff everything of the best as they strive to succeed while enjoying this major ICC tournament,” Mr Lorgat concluded.

Charlene Lackay, Head of External Communications at Momentum said: “We are very proud of the Momentum Proteas and hope the nation gets behind them as we have, and especially for this World Cup.

“We have seen fantastic effort from the players and their continued commitment is showing results, with successive wins. Momentum is pleased that we were able to contribute to the appointment of full-time national coach Hilton Moreeng, who is helping produce these results. We wish Mignon and the ladies all the best and we’ll be cheering for them.”

Photo caption: Cricket SA has announced its 14-player squad for the ICC Women’s World Twenty20 in Bangladesh, from 23 March to 2 April 2014. In this file photo, the Momentum Proteas celebrate after claiming their T20 series win against Sri Lanka, beating the visitors by 5 wickets on 4 November, 2013, for a 2-1 advantage to claim the 3-match series. Photo: Cricket SA