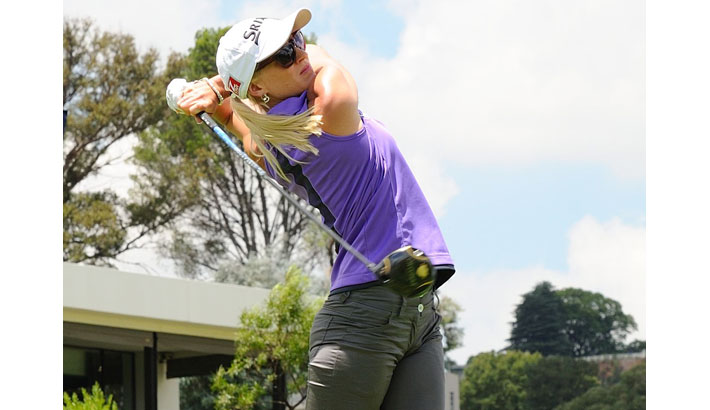 Top South African amateur Magda Kruger was in a buoyant mood after a one-under-par 71 earned her a share of the first round lead at the Sunshine Ladies Tour’s Sun International Challenge, but it was former SA Women’s Open champion Tandi von Ruben who had more reasons to be happy following the opening round at the Lost City Golf Course.

Von Ruben dropped three shots but atoned with two birdies and an eagle three at the shot-maker’s course to open her account in red figures and was pleased to avenge a disappointing first round in the Sunshine Ladies Tour’s launch event at Houghton last week.

“I was hoping for a strong start to the Sunshine Ladies Tour, but I was a little twitchy at the start,” she said. “I guess I was a cross between expectant, excited and nervous and I didn’t have a great start. I managed to come back a lot stronger to tie for third in the Chase to the Investec Cup for Ladies and that gave me a boost that showed with a birdie at the opening hole.”

Von Ruben bogeyed the sixth after finding the greenside bunker with her approach, but wiped the slate clean with a 30-footer for eagle putt at the next hole.

“Nothing gets you going like an eagle on your card,” the 27-year-old said. “I tried to go for the green in two at the par-five ninth, but I left my approach short and failed with the up and down. Still, it was great to turn in red figures and it set the tone for the back nine.”

Von Ruben cancelled a birdie at the 11th with a drop at the 12th where she overshot the narrow green.

She parred her way home, just missing a birdie chance at 18t when her seven-foot putt at the par-five shimmied the hole, but refused to drop.

“I’m just thrilled to be in the running, because it’s been a while since I’ve played at this level,” she said. “I did some preparation, but that’s never the same as competing. I managed to take quite a bit of rust off at Houghton, so it’s just fantastic to be sharing pole heading into the final round.”

Kruger from Pretoria missed quite a few national amateur events in favour of her matric exams prep last year, but announced her return to competitive golf with a one stroke victory in the Eastern Province Stroke Play Championship a week ago.

The 18-year-old Centurion golfer reeled in birdies at the second, fifth and eighth holes to turn in three under and take the outright lead, but bogeys at the 12th and 16th holes left her tied for the lead with Von Ruben.

“Even though I left some putts out there, I’m not complaining,” said the country’s number two ranked player, who had the legendary Laurette Maritz for company in the opening round at Lost City.

“I really enjoyed myself out there and that’s what this is all about. It was just fantastic to play with Laurette, who is so professional and who just pushed me to lift my own game.

“My course management and putting let me down at Houghton, but I think there was also a bit of big stage nerves. I was tentative with the putter, not wanting to drop shots.

“The Lost City course really suits my game and the greens are just slightly slower and run very true, so I had a lot more confidence over my putts. I still left a few out there, because the breaks are pretty tricky, but all in all, I’m thrilled to be sharing the lead. Tandi is one of our idols, so it’s going to be amazing to play with her in the final round.”