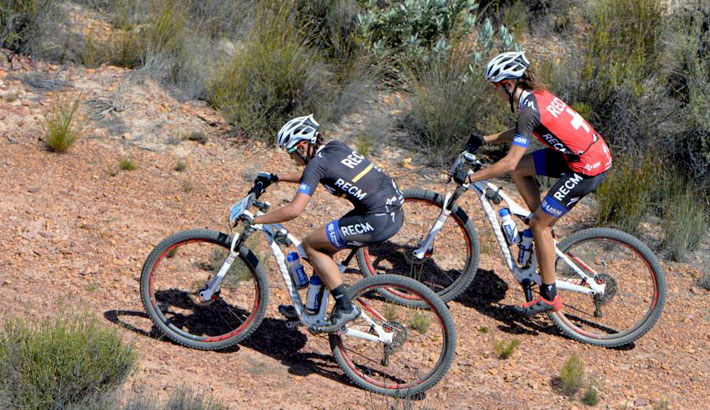 The pair were always under pressure from the Sasol Racing pair of Ischen Stopforth (RSA) and Yolande de Villiers (RSA), who finished second on each stage and second overall. The final stage saw just a 17-second gap between RE:CM and Sasol Racing.

“I didn’t feel too well today so struggled a bit more than on the other two days,” said a weary Stander, widow of the late Burry Stander. “With about a kilometre to go, Ariane, who was behind me, said she could see Sasol Racing catching us and we need to pick up the pace, so we pushed the last bit quite hard.

“Ariane is so incredibly strong. She was an amazing teammate and motivator. I would never have ridden that hard without her support, both physically and emotionally. I couldn’t have asked for a better partner and one day my goal is to race a Cape Epic with her,” added Stander.

“It was good to win. I haven’t won a mountain bike race in ages. After struggling emotionally for the whole of last year after losing Burry, I’m now regaining my physical form, and a hunger to race hard again. And this weekend’s success wouldn’t have been possible without the really professional support of our Team RE:CM staff. It was a truly great event with some amazing trails and food!” remarked Stander.

England’s Leona Kadir won the final stage and the overall women’s Solo category title, while the John O’Connor Cycles pair of Andrew Payne (RSA) and Bianca Cartoulis (RSA) rounded out their Mixed Category domination of the event with a third stage win and the overall crown.