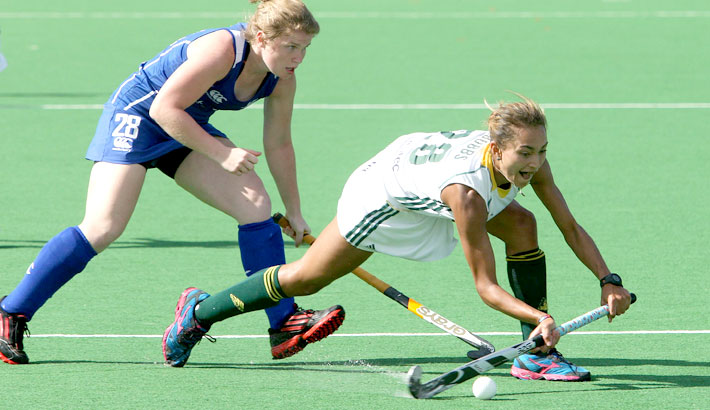 SA Open Up Scotland with 5-Nil win in Fourth Test

A brace apiece from Lilian du Plessis and Kathleen Taylor, plus one more by Jade Mayne, gave the Investec South Africa women’s hockey team an impressive 5-0 victory over Scotland in the fourth Test at Tshwane University of Technology in Pretoria Tuesday night, after the girls in green and gold had led 2-0 at half-time.

The in-form Du Plessis nailed two from the penalty spot in the 14th and 50th minutes, while Taylor in the 28th, Mayne in the 40th and Taylor once again in the 65th netted a trio of wonderful goals from open play.

SA had early territory and possession but Scotland were dangerous on the counter, and two penalty corners in succession saw goalkeeper Hanli Hattingh pull off a pair of good saves from Sam Judge, while Lisa Deetlefs cleared off the line from Nikki Lloyd.

SA were finally rewarded when Celia Evans was impeded in the strike zone and Du Plessis made no mistake, going low to Cowie’s right. Scotland’s long balls were working well and, had it not been for the final pass going astray, they might have had more joy.

Investec SA’s Jade Mayne scored her team’s third goal five minutes into the second half, when she finished in magnificent fashion with a sizzling shot past Scotland keeper Siobhan Cowie, during the fourth Test Tuesday night. Photo: Reg Caldecott

Seven minutes from half-time SA striker Tanya Britz crossed from the right and Taylor did the rest (2-0). Five minutes into the second half Mayne finished in magnificent fashion with a sizzling shot past Cowie after Taylor’s superb sleight of pass had carved open the Scotland defence.

In the 50th Sulette Damons’ searing pace led to a second goal from the penalty spot by Du Plessis, after the captain’s superb shot at full stretch had caught a Scottish foot on the line.

Scotland’s third PC came and went, keeper Hattingh making the intervention, but it was clear that SA’s finishing was better and Taylor underlined that in the 65th with a stunning goal on the turn, after Illse Davids’ perfectly-weighted pass (4-0).

Three minutes from time, Mayne’s beautiful through-ball led to SA’s first PC of the match, but Lisa Deetlefs’ powerful slap-shot was brilliantly run down by Howie.

Main photo caption: The Investec SA women’s hockey team beat vistiors Scotland 5-0 in their fourth Test, at the Tshwane University of Technology in Pretoria, on Tuesday, 18 February, 2014. In this file photo, Quanita Bobbs of South Africa (right, pictured in the third Test between hosts SA and Scotland) is challenged by Heather Elder on Sunday 16 February. Photo: Reg Caldecott