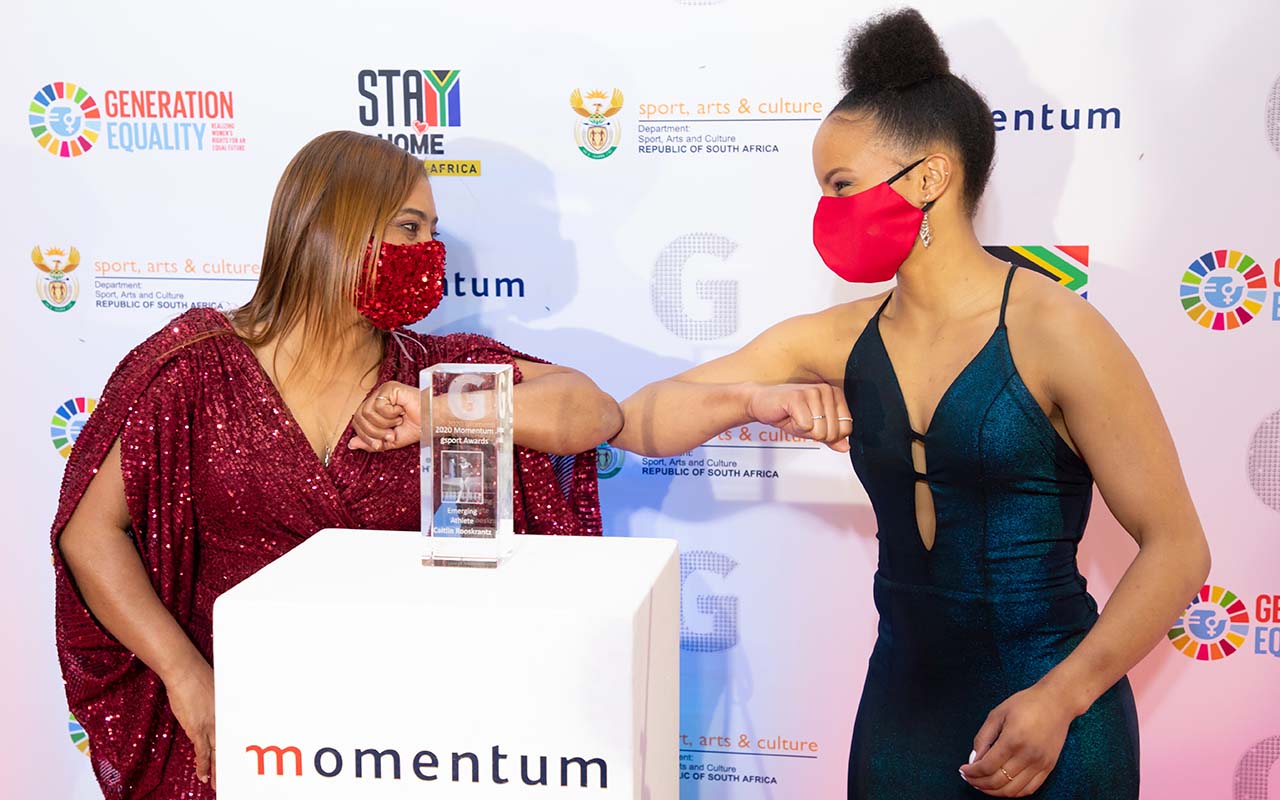 This award honours and celebrates an emerging sportswoman who has excelled at a national and provincial level in the past year. It honours the rising stars that are well on their way to sporting greatness.

Outstanding artistic gymnast and Olympian Naveen Daries’ career continues to rise. She participated at the African Continental qualification event in 2021, where she qualified for the Tokyo Olympic Games and also became the only gymnast to qualify for all 4 apparatus finals to compete at the FIG World Challenge Cup. Daries was part of the South African team that represented the country at the Olympics and is grateful to have her talents take her that far

“I am so grateful to be able to use my talent to make such a positive impact, being part of team South Africa for the Tokyo Olympics was a dream come true. I know that the sky is the limit when it comes to what I can achieve. When I got the news that I was a finalist for the Momentum gsport Awards I was over the moon, it felt like a very important pat on the back and an affirmation that I am on the right track. It is amazing to be celebrated, but even more important to be celebrated alongside fellow athletes that inspire you and your work ethic.

“I was so happy to be part of history when I qualified for the Olympics; it became the first time that South Africa would have 2 female gymnasts at the Games. The gsport awards really put our work in the limelight and not only through the awards but through their platforms which feature women every single day. Gymnastics South Africa is so supportive of our dreams and as athletes we spend a lot of time away from home, to have such a supportive structure means that we can do our best all the time.”

Daries has now set her sights on even greater heights: “Now that I have had a taste of the Olympics, I hope to qualify for the 2024 Olympics in Paris and hopefully bring home a medal.

“Thank you for all the support and for always cheering me on, thank you to the people who nominated me, to the panel of judges and everyone who support me.” – Artistic gymnast, and Olympian, Naveen Daries – Emering Athlete of the Year Finalist at the 2020 Momentum gsport Awards

She couldn’t stop gushing over being a #gsport16 finalist: “It is so amazing, it is an honour to have my name put out there alongside the names of Naveen and Reabetswe who are both incredible athletes. Naveen is at the Tokyo Olympics, Reabetswe is an international athlete, and my name gets to be mentioned alongside them, it such an honour. I have had a good sporting year, I got to wear national colours and represent my country in Egypt in both the road and the track cycling events. I came home with a gold medal from the road side, two gold, one silver and one bronze from the track side and I got to meet my heroes along the way.

“As a young woman in sport, I have taken the initiative to raise awareness through my schoolwork, I have written essays and speeches on how women’s sport doesn’t get enough media coverage and recognition. Without the support we cannot get sponsors, without sponsors we cannot get funding and without funding we cannot grow our sports professionally. The Momentum gsport Awards have done this in amazing ways, their work has helped us grow our sports, the work they do inspires me to be a role model to younger cyclists who yearn to be like Ainsli when they grow up. This platform also positions us in a beautiful place to attract sponsors.”

Rounding up the finalists in this category is South Africa’s fastest female athletes over 100 metres, Reabetswe Moloi. This year alone, the sprinter participated in seven competitions, winning five and being runner-up in the other two. She secured the national women’s 100m title at the Sizwe Medical Fund ASA Senior Track and Field Championships in April this year. Moloi is honoured to have her achievements recognized on a platform like the Momentum gsport Awards.

“It is really an honour to be a finalist for the Emerging Athlete of the Year. To be nominated with such incredible athletes and be named as top three in the country means I’m already a winner. My stand out moment definitely has to be winning nationals, reaching that goal was really a great experience and a great moment that I will forever cherish.

“I am so happy to be a finalist after such a great year, I believe that the Momentum gsport Awards have had a positive impact on women in sport. It is a platform that showcases so many talented women in the sporting field, administrators, federations and so many other women that I believe are making the biggest impact in encouraging other women to go out there and achieve their goals in sport.”

The gsport Emerging Athlete of the Year category has previously been won by some of the best athletes in the world including Olympic gold medalist and world record holder Tatjana Schoenmaker, champion golfer Kajal Mistry, track and field star Rogail Joseph and 2020 winner artistic gymnast and Olympian, Caitlin Rooskrantz.