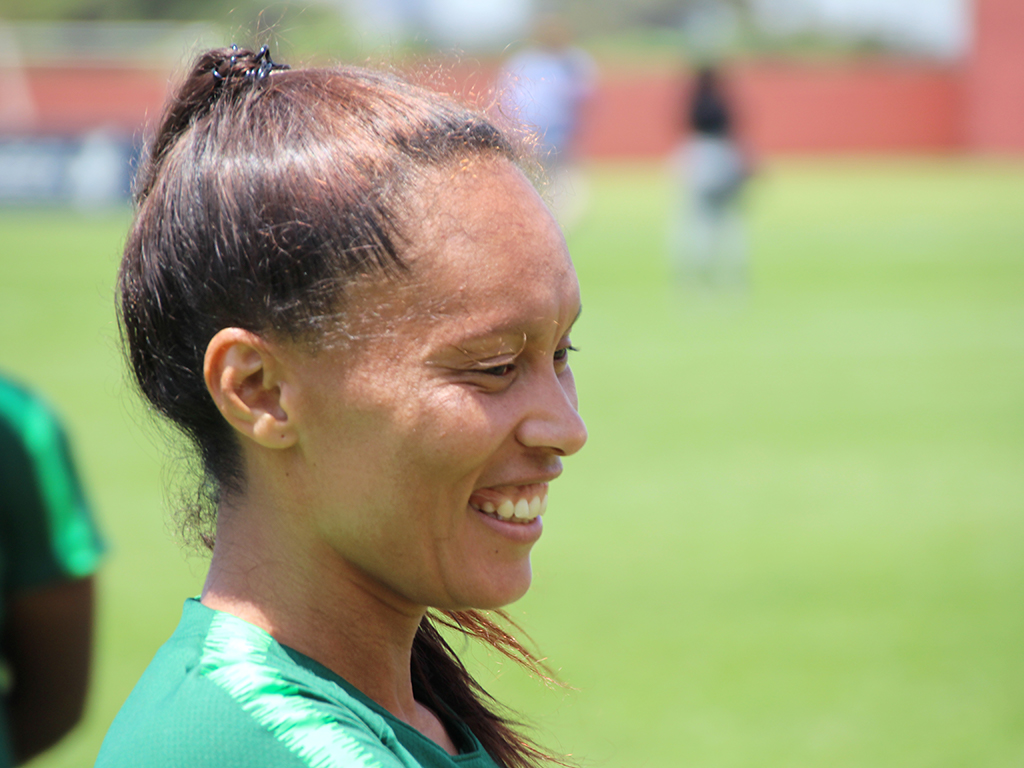 Sasol-sponsored Banyana Banyana made a determined start to their Cyprus Cup campaign when they drew their opening fixture 2-2 against Finland, Group A’s most formidable opponents on paper in Larnaca on Wednesday, 27 February.

The occasion was marked by good-spirited companionship on the part of skipper Janine van Wyk, who handed the captains armband to vice-captain Refiloe Jane, who made her 100th appearance in national colours.

Jane made her debut for South Africa in this tournament back in 2012 against Northern Ireland, and the Canberra United FC midfielder has 12 goals to her name.

On the field of play, head coach Desiree Ellis made six changes to the squad that started against Sweden in Cape Town last month, and South Africa started very slowly, allowing Finland to dictate terms.

This was the second meeting between the two nations – they last met in the 2015 in the Cyprus Cup, with the Europeans emerging victorious 2-1.

Banyana Banyana were chasing shadows, which saw Refiloe Jane get a yellow card as early as the 10th minute, but despite playing with their backs against the wall, the South Africans held firm.

Their best chance in the 43rd minute of the first half, when Smeda sent a long ball to Rhoda Mulaudzi who managed to control it nicely, but shot wide with just the keeper to beat.

Ellis made two substitutions in the second half bringing on Linda Motlhalo and Thembi Kgatlana for Busisiwe Ndimeni and Karabo Dhlamini.

Finland opened the scoring in the 48th minute through Juliette Kemppi after a defensive lapse by South Africa.

A short while later they managed to get the ball in the back of the net but was disallowed.

Then, the match was stopped for a few minutes, as a heavy downpour prevented the players from playing.

When they resumed, Kgatlana was giving the Finland defence a headache, outpacing the Finnish defence only for her powerful shot to be parried for a corner.

She was back again in the 69th minute, carrying the ball from the halfway line and passing on to Jermaine Seoposenwe in the box, who was fouled with the referee pointing to the penalty spot.

Smeda coolly converted the penalty in the 70th minute to make it 1-1.

But seven minutes later Adelina Engman was given acres of space in the box, and managed to hit a curler that gave Andile Dlamini no chance in the Banyana Banyana goals for a 2-1 advantage to Finland.

Fortunately for South Africa, Kgatlana was not done yet, and in the 83rd minute she again took on the Finland defence and, after a couple of twists and turns, she let rip a shot that gave South Africa the much-needed equaliser, for a match that fairly ended 2-2 all-square.

Banyana Banyana’s second tournament fixture is against the Democratic Republic of Korea on Friday, 1 March 2019, at the AEK Arena in Larnaca, the early evening kickoff at 18h00.

How they lined up:

Photo 1 caption: Leandra Smeda cooly slotted a penalty after being fouled in the Finnish box, to bring Banyana Banyana level with the competition after Group A top-rated Finland opened the scoring a minute earlier. Smeda was photographed during the Media Open Day in Johannesburg, just prior to the team’s departure to the Cyprus Cup. Photo: gsport

Photo 2 caption: CAF African Player of the Year Thembi Kgatlana was a second-half substitution by Coach Desiree Ellis, and quickly frustrated the Finish defence’s side with her twists and turns, and eventually danced through to net a mighty boot to bring SA level for the second time, just in time for a 2-all finish in the tournament’s opening fixture. Photo: gsport