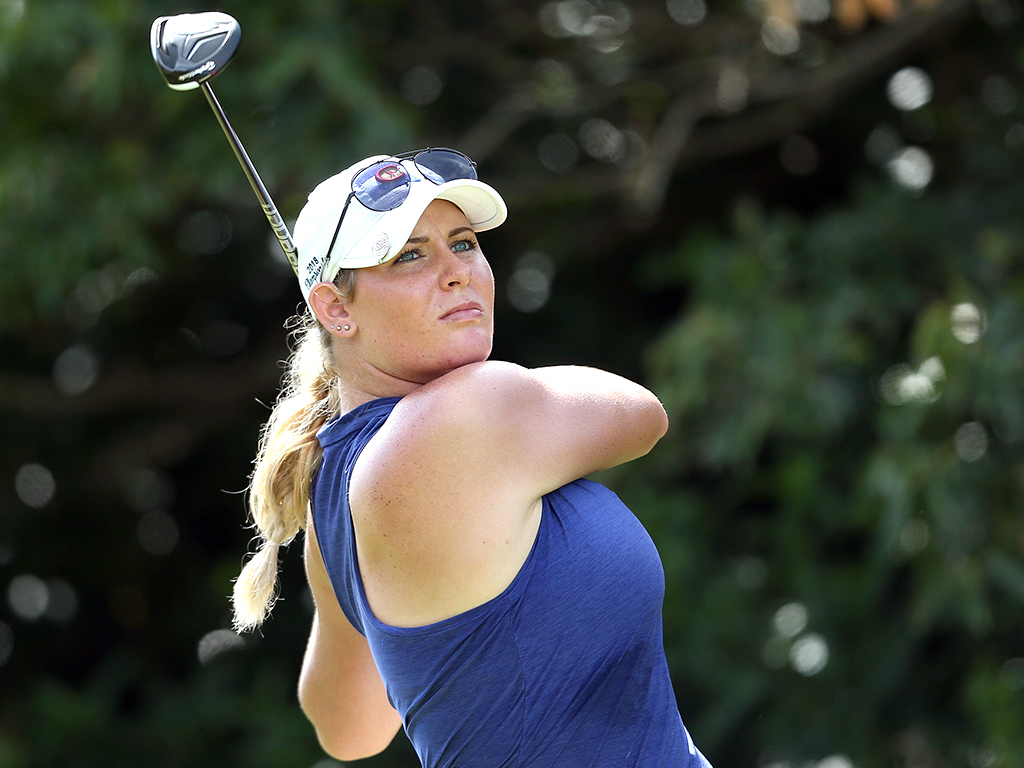 Jessica Dreesbeimdieke scorched her way around the Wild Coast Country Club on Tuesday to open up a two-shot lead on four-under 66 in the first round of the SuperSport Ladies Challenge, presented by Sun International.

The 22-year-old University of Denver graduate made her debut on the Sunshine Ladies Tour last week at the SA Women’s Masters, and her period of adjustment seems to be over as she carded a round including five birdies in difficult wind conditions.

Dreesbeimdieke eclipsed the performance of defending champion Nobuhle Dlamini of Swaziland, who shares second alongside Scotland’s Laura Murray on two-under 68.

The international domination of the leaderboard continued down to a share of fourth on one-under 69 with three-time winner Bertine Faber tied with France’s Emilie Piquot, Chloe Williams of Wales and the Scot Jane Turner.

Dreesbeimdieke, who had a solitary bogey at the par four fifth, said a strong start to the round helped her find her stride.

“I got off to a really hot start, I birdied the first two holes and narrowly missed a birdie on the third.” – SuperSport Ladies Challenge Round 1 Leader Jessica Dreesbeimdieke

“My putting was definitely a lot better today than last week. That’s really what made the difference. My ball-striking has been really consistent lately.”

The psychology and social legal studies major who now lives in Florida, USA, carded eight pars and a birdie on the back nine as the wind began to howl.

“As soon as the wind came up I was just trying to keep my pars going. It was more about managing your game than doing anything crazy. Then I happened to make a birdie on 17, which felt like a hole-in-one with the wind. I aimed 40 metres right of the pin because it was a crosswind, and it finished just left of the hole. I probably made a seven-metre putt for birdie.”

The study of psychology will come in handy in the pressure situations Dreesbeimdieke will encounter in tournament golf.

“I like to think psychology helps me with golf, but then I’d have a tendency to over analyse,” she said. “It definitely helps me with coping techniques and keeping my mind in the right place – which was a challenge when I turned pro.”

Dlamini, meanwhile, went off the 10th and had a slow start to her round with two bogeys and a birdie to turn in one-over. Coming home, the three-time Sunshine Ladies Tour winner clicked into gear with four birdies in five holes from the third, but signed off with a bogey at the par three eighth.

“I’m happy to be playing here again. I like the course and I’m looking forward to the rest of the tournament, I’m quite solid and consistent. Hopefully I’ll make a few more putts.”

Murray had a fantastic day on the greens, and she made sure to thank the shortest club in her bag after her solid opening round.

“I hit the ball really nicely today, but I holed quite a few putts,” said Murray. “I seemed to get the speed of the greens pretty well. I had 26 putts out there, so I was happy with that. I must have holed a 35-footer for birdie at the first hole, so that was a bonus.”

In addition to her hot putter, the Kippie Lodge Sports and Country member has a secret weapon in her armoury this week – a vital factor in Lejan Lewthwaite’s play-off victory in the SA Women’s Masters last Saturday.

“I picked up Gilbert for this week, who was on Lejan’s bag at San Lameer and he helped me quite a few times with taking the right club,” Murrary said.

GolfRSA Elite Squad player Kajal Mistry, who lost to Lewthwaite at the first extra hole at San Lameer,  is not out of it, either.

The 18-year-old Ernie Els and Fancourt Foundation member offset three bogeys with a trio of birdies for an even-par 70 to tie for eighth with former Sunshine Ladies Tour winner Kiran Matharu from England.