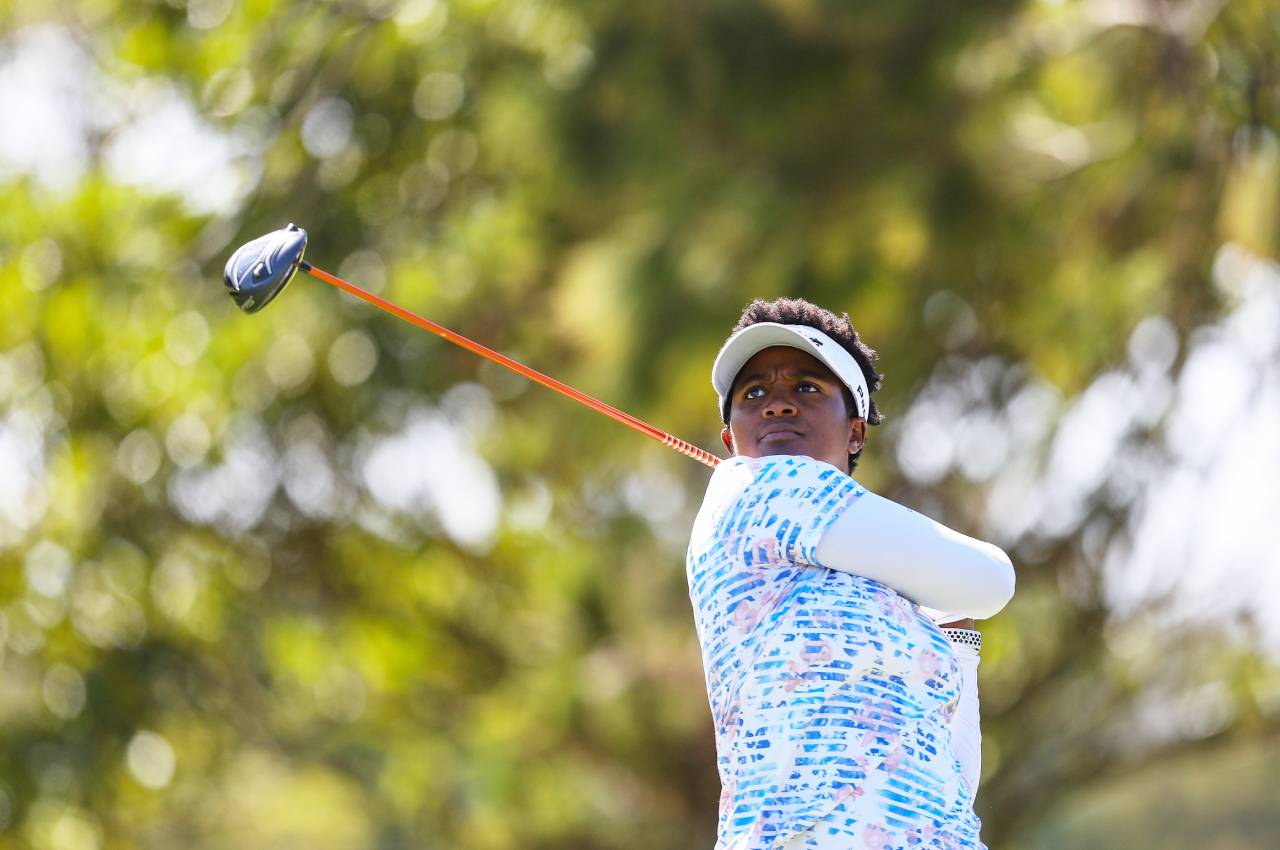 A well-rested Nobuhle Dlamini took advantage of a breeze caressing the King David Mowbray Golf Club fairways to edge into the 36-hole lead on day two of the Cape Town Ladies Open.

Given Dlamini’s form and Pace’s extensive competitive experience, the smart money would be on the pair to go-head-to-head to bank the first winner’s cheque of the 2020 season, but Durbanville rookie Tara Griebenow and seasoned French campaigner Astrid Vayson De Pradenne are still both firmly in contention.

The pair returned rounds of 71 to stay in touch, finishing in a tie for third on level par.

Dlamini had to hit the ground running after she only landed back in South Africa on the eve of the season-opening event, having secured her Ladies European Tour card with a top 8 finish at the Q-School in Spain at the weekend.

“Today I hit a lot of long irons and I drove the ball well. ” – eSwatini golfer, Nobuhle Dlamini.

She made an impressive start and led the field by two shots after nine holes, but when fatigue set in on the inward loop, a number of bogeys saw her slip to one-over 73 and she started the second round one shot behind Pace.

“I slept really well and felt like a new person this morning,” said Dlamini, who racked up four birdies before the turn. “I felt really comfortable out there. I played the course for the first time during the first round and with the wind gusting so strong, it was daunting.

“I liked the layout, but I wasn’t sharp. It’s not a course where you can pull driver out of the bag on every hole. Today I hit a lot of long irons and I drove the ball well. I made some very good putts on the front, but the putter fell asleep on the back nine. I was happy to make two putts for pars until one finally dropped for birdie on 17.

“Playing with Lee-Anne in the final round will be interesting. She may not have played for a while, but she is so experienced. You can never underestimate her.”

Pace sandwiched a double bogey between birdies at the first and third holes. The former LPGA Tour champion erased another dropped shot at the fourth with gains on seven and nine and reeled in two more birdies coming home.

“Another up-and-down start for me,” laughed Pace. “I hit a much better drive today on the second and doubled it again. Tomorrow I’m hitting 6-iron, 6-iron and hopefully a chip-and-putt will get me a par. I dropped the fourth again, too. Luckily, I had a couple of early birdies to help me out.

“I made quite a lot of birdies when I struck the ball well and found the fairways, and I was happy to finish with a birdie at the last. At least it warmed up nicely. It’s a tough course. It’s tight, especially when the wind blows.

“Overall, I’m happy that I can see my game improving in every round and I look forward to going toe-to-toe with Nobby in the final round.”

Dlamini and Pace will be playing in the final group with Griebenow, who held her own in the heady company of Dlamini and fellow Ladies European Tour campaigner Lewthwaite.

“It’s her Sunshine Ladies Tour debut and she properly being tested, but I was so impressed with how focussed and calm she was out there. She has a great attitude. Nothing beats experience and it’s great for her to be playing with us in the leading group on Friday,” Dlamini said.

Griebenow completed her PGA Diploma at The Golf School of Excellence at the Paul McKenzie Academy last year and the Western Province rookie tested the waters in a few Vodacom Origins of Golf series events last year.

“I won the Humewood event, which was a great experience but competing on the Sunshine Ladies Tour is a different league. The atmosphere on the Origins series is more relaxed because you are playing with amateurs, but this is the big time,” said the 23-year-old.

“It was great to watch the way Nobby and Lejan managed their games and stay in the moment. Playing with Nobby and Lee-Anne in the final round will be another big learning opportunity for me and I can’t wait.”

Second Round Scores:
(All competitors RSA unless otherwise stated and amateurs are indicated AMA)