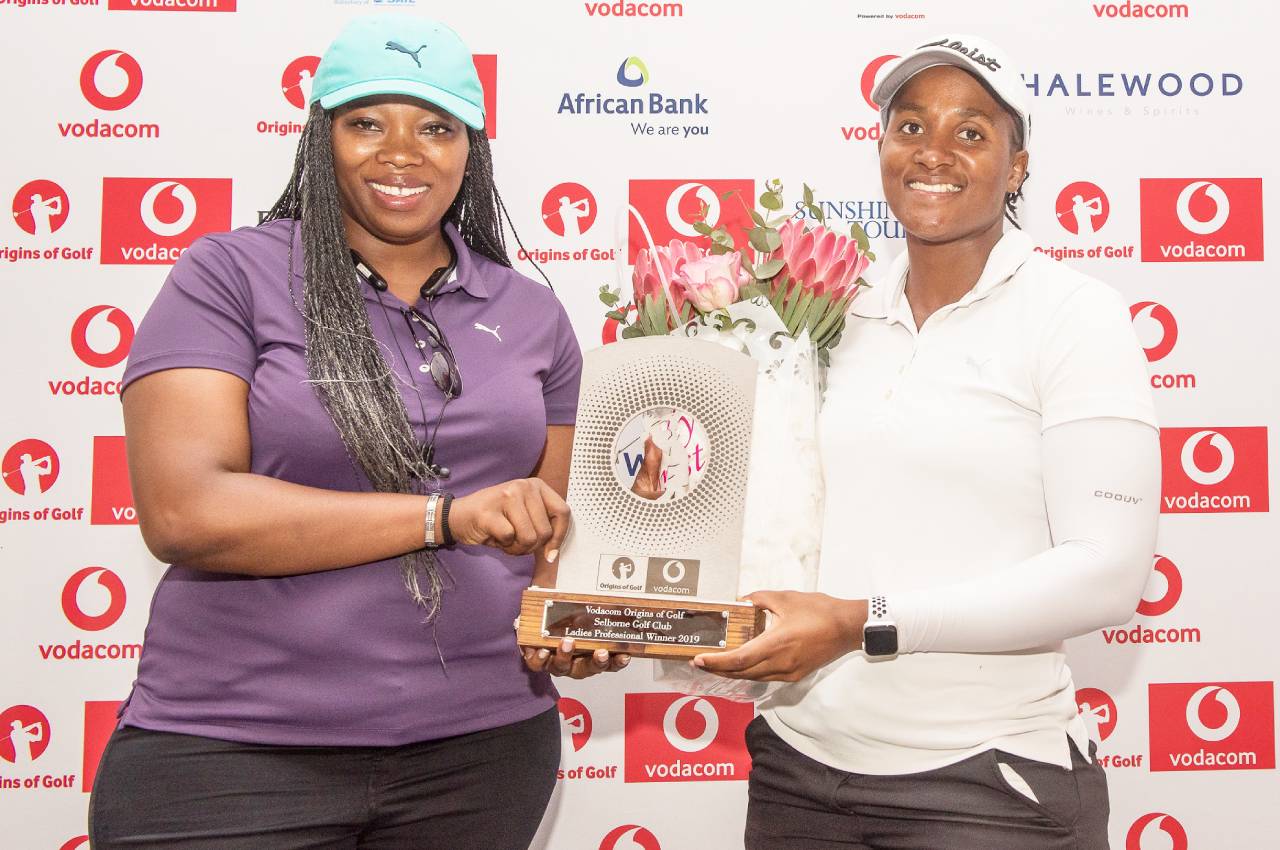 Nobuhle Dlamini’s dream season continued with a three-shot victory at the Vodacom Origins of Golf Series on Wednesday, 17 October 2019.

Last year, the big-hitting Eswatini golfer showed off her expertise in the wind when she broke her Sunshine Ladies Tour duck with a wire-to-wire win at the Wild Coast Sun Country Club and those same skills earned her the first round at Selborne Golf Estate, Hotel and Spa Club.

Dlamini fired a two-under-par 70 in testing conditions and started the final round three shots clear of the field.

The 2019 Investec Property Fund Order of Merit winner staved off spirited challenges from British pair Lauren Taylor and Jane Turner and South Africa’s Lejan Lewthwaite on the last day and clinched her fourth victory of the season with a birdie finish.

“It’s great to have this series for the younger professionals.” Eswatini golfer, Nobuhle Dlamini

“It was a strange two days,” said Dlamini, who closed with a 73 to win by three shots on one-under-par 143. “In the first round, the wind was strong, but it was blowing in the right direction. I was accurate off the tees and put myself in good positions to score.

“In the final round, the wind blew from the opposite direction and the course played really tough. I did hit the ball well, but the putter was cold. I’m thrilled with the win, though. It’s great to have this series for the younger professionals and for players like myself and the others who are on a break from the Ladies European Tour (LET). It’s really good to stay competitive.”

Dlamini was in imperious form during the 2019 Sunshine Ladies Tour, reeling in titles in the Dimension Data Ladies Challenge at Fancourt, the Joburg Ladies Open at Soweto Country Club and the Investec Royal Swazi Open for Ladies at her home course in May.

“It’s one more chance to stay competitive and from what I hear, it will be a strong field.” Dlamini on the Vodacom Origins Series final at Simola Country Club.

She arrived at Selborne after enjoying her best two finishes on the Ladies European Tour.

“With my status, I had to make the most of every start this year to try and secure my playing privileges for next season,” Dlamini said. “I got into eight events, but I missed a few cuts, so the pressure was on. Then I had a top 12 in France and top 15 in Spain, which boosted my ranking. I didn’t perform great in India, but a 64th place finish took me to 83rd in the rankings.

“The top 80 on the Order of Merit will keep their cards, so hopefully I make it. I’m still on the reserve list for the Spanish Open at the end of November, but I am into the last event, the new Magical Kenya Ladies Open. The ladies who haven’t played six events will fall out and if I do well in Kenya, I should be okay for next year.

“That’s why I’m looking forward to the Vodacom Origins Series final at Simola Country Club. It’s one more chance to stay competitive and from what I hear, it will be a strong field.”

Dlamini will be facing stiff competition at Simola Country Club on 29-30 October with the celebrated Lee-Anne Pace making a welcome return to South African shores alongside French golfer Anna-Lise Caudal, who denied Dlamini in the Jabra Ladies Classic at Glendower and five-time Sunshine Ladies Tour winner Stacy Bregman, among others.

“It should be a really good contest between us,” Dlamini said. “I’ve been told that Simola is very beautiful, but being a Jack Nicklaus design, you know it will be very good test. I’ll spend the next couple weeks working on my game and I’ll be ready for the final.”