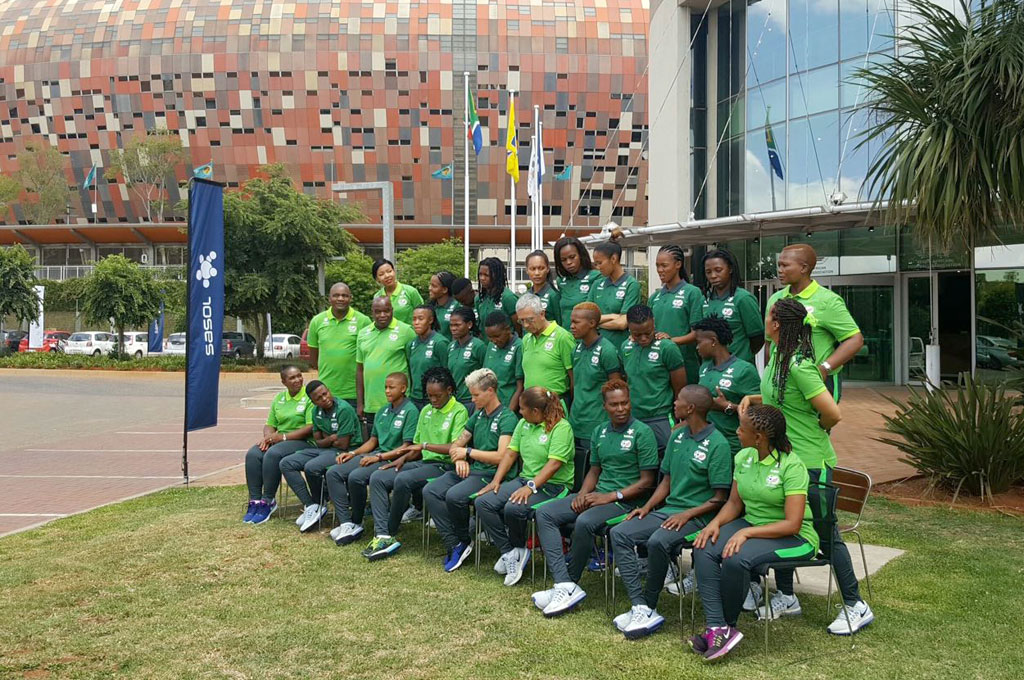 Banyana Banyana interim coach Desiree Ellis has announced a squad of 21 players to play in the 10th Women’s Africa Cup of Nations tournament that will be held in Cameroon from 19 November to 3 December.

Ellis, who took over from former head coach Vera Pauw, has kept the bulk of the squad that did duty at the 2016 Rio Olympic Games in August.

Defender Astria Boks from Santos FC of Cape Town is the only newcomer in the team while the likes of u20 captain Amogelang Motau, Yolula Tsawe, Lebogang Mabatle, Silindile Ngubane and Andisiwe Mgcoyi have been recalled.

All six missed the Olympics.

Holland-based Roxanne Barker and Jermaine Seoposenwe who plies her trade in the USA, are only expected to join the squad in Cameroon on the 18th due to club commitments.

Ellis says it was important to keep the experience in the team for this big tournament.

“We have come very close in this tournament and we believe we stand a good chance of doing even better. I have kept the bulk of the squad mainly for the experience gathered over the years and at the Olympic Games.

“I am more confident than ever that we will do well this time around,” said Ellis, “And I don’t mean it will be an easy task. But in terms of the selection, if it ain’t broken, don’t fix it, and what we can assure all South Africans is that we will do the best we can to emerge victorious,” said Ellis.

“Personally, it is a big task placed in front of me having been with the team for so long – from player, to assistant coach and now interim head coach – but a job I will do to the best of my abilities. Once again I would like to thank the South African Football Association (SAFA) for the trust and confidence they have in me, and the entire technical team, leading this group.

“A big thanks also to Sasol who have been behind all the way, and we would not have achieved some things without their unwavering support.”

The former Banyana Banyana captain had her first taste of being in charge when she led the squad against Egypt earlier last month (Saturday, 22 October) and won the international friendly match 3-1 at the Dobsonville Stadium.

“I think that match was what we needed as a group – since Banyana Banyana last played in August – so we can assess how far in terms of fitness as a team. It helped a great deal as I was also able to see if the players still had the hunger they possessed before the Olympics, hence I am confident we will perform well in Cameroon. I am very happy with the way they responded to new methods,” added Ellis.

Maud Khumalo, together with SA u17 head coach, Molefi Ntseki, will assist Ellis.

“First of all congratulations to the players that have been selected for this big tournament. Secondly, as the Association, we have confidence in you that you will deliver on what is required from you.

“On three occasions you came very close, now we believe with all the experience you gained in Rio you are now better equipped to bring it home for the first time ever. Go and write your own history, be the Class of 2016 that not only went to the Olympics but also won the Women’s AFCON, away from home. All the best to all of you,” said SAFA President Dr Danny Jordaan.

Proud sponsors, Sasol, have also wished the team well. “At Sasol, we are immensely proud of Banyana Banyana and their many football accomplishments on the continent and world-wide,” said Nozipho Mbatha – Manager, Group Brand Marketing.

“Over the past nine years, they have taught us the value of perseverance and harnessing one’s talent in order to empower yourself. We ask the nation to support the team as they embark on this journey and wish them the best of luck. We would like to congratulate and wish the newly appointed interim Head Coach Desree Ellis all the best. We are extremely excited to see how well the team will do.”

Banyana Banyana will warm up for the Cameroon tournament with an international friendly match against Zimbabwe in Harare on Thursday, 10 November 2016.

The South Africans return to the country on Friday, 11 November and will prepare for the trip to West Africa. They are expected to depart for Cameroon on Monday, 14 November.

Banyana Banyana have been drawn in Group A with hosts Cameroon, Egypt and Zimbabwe.

They have already faced all three opponents in different competitions.

Rankings:
* Cameroon –  highest ranked country in the group (47th in the world and 3rd on the continent)
* South Africa – (one place adrift at 48th in the world and 4th on the continent)
* Egypt – (80th in the world and 9th on the continent)
* Zimbabwe – lowest ranked nation in this group (94th in the world, 13th on the continent)
Appearances:
* South Africa: will be making their 11th in a row. Have never won the tournament. They finished 4th in 2014 in Namibia. They have also hosted the tournament three times – 2000, 2004, and 2010. They were runners four times – 1995, 2000, 2008, 2012
* Cameroon: also making their 11th appearance, missed out on the second edition in 1995. Were runners up in 1991, 2004, 2014
* Zimbabwe: making their 4th appearance. Last appeared in 2004 when they finished in the group stages. Best finish was 4th place in 2000.
* Egypt: Only their second appearance, last featured in the tournament in 1998 where they were knocked out in the first round
* South Africa and Zimbabwe were the two African representatives at the Olympics
Fact File:
* The Women Africa Cup of Nations was previously known as the African Women’s Championship, until 2015

Photo 2 caption: The 10th Women’s Africa Cup of Nations tournament that will be held in Cameroon from 19 November to 3 December