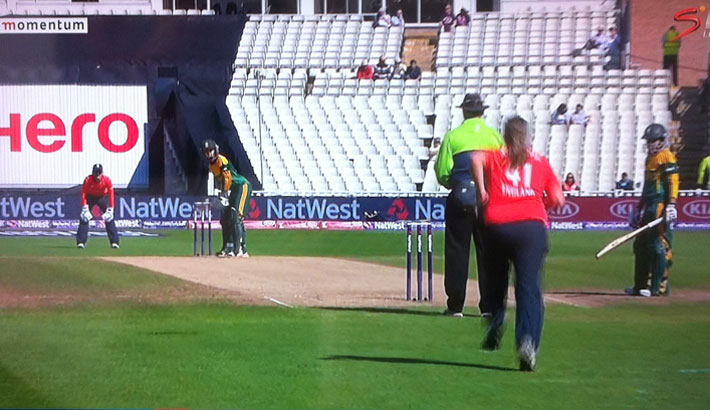 Lauren Winfield scored her maiden half century to lead England women to a nail-biting, eight-run victory over the Momentum Proteas at Edgbaston on Sunday. England’s victory in this third and final Twenty20 (T20) match gives them a series white wash over the visitors, who have steadily gotten better by every game they have played.

England posted 126/6 at the end of their innings after they were put in to bat first by South Africa. Winfield scored 74 runs off 60 balls, including nine fours and the first six of the series, to put her side in a strong position before her departure in the 17th over.

The visitors showed their strongest bowling performance in the series to date, taking six wickets thanks to Chloe Tryon (2/18), Dané van Niekerk (1/16) and Matshipi Letsoalo (1/18).

Marizanne Kapp (1/24) was the first bowler to strike, removing England’s skipper, Charlotte Edwards for four in the third over. She was followed by Sarah Taylor for nine at the hands of Letsoalo.

South Africa’s fielding, improved with each match that passed. Suné Luus took a brilliant catch to get rid of Winfield, while wicket keeper, Trisha Chetty was brilliant behind the stumps, removing Natalie Sciver for four and taking an impressive catch to get rid of Heather Knight (8) off Tryon in the 19th over.

Shabnim Ismail (1/23) bowled Danielle Wyatt out for a duck off the first delivery of the last over to restrict England to the modest total.

South Africa made a strong start with a solid, 59-run opening stand by van Niekerk and Chetty before the former was run out for a well-played 35 off 40 balls in the 11th over.

Lizelle Lee was the next to depart, trapped lbw for nine by Jenny Gunn (2/18) at the end of the 14th.

England’s experience and ability to apply pressure won out, seeing the run out of Chetty (34) off a marvellous direct hit by Lydia Greenway in the 16th over.

The visiting captain, Mignon du Preez was dismissed off the next delivery, when she was caught out by Greenway in the deep for three.

Sarah Taylor showed why she is considered one of the world’s leading wicket keepers, when she pulled off an acrobatic run out of Kapp (1) to leave South Africa on 89/5, needing 38 from 21 balls.

Chloe Tryon and debutant, Bernadine Bezuidenhout put on a promising partnership of 25 runs from 15 balls for the sixth wicket before the latter was stumped for 12 off nine balls at the end of the 19th over.

South Africa needed 13 from the last over, and good bowling by Katherine Brunt and tight fielding by the rest of the side saw the visitors fall eight runs short of victory.

The Protea Queens, as they are known, will set their sights on Ireland in another three-match T20 series from 9-10 September at Moseley Cricket Club. They will play a double header on the ninth, followed by the final on the 10th before they return home.