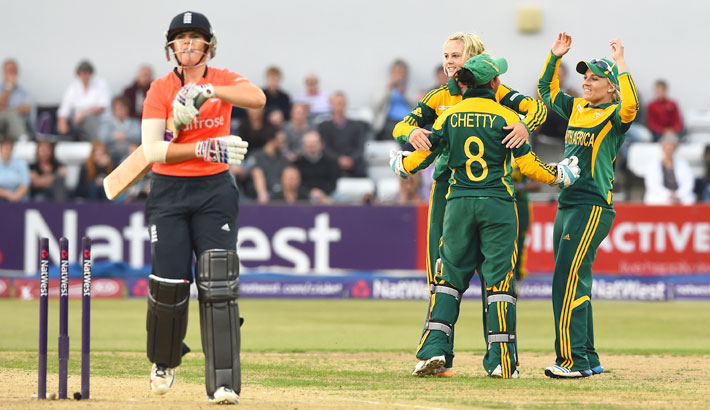 The Momentum Proteas women have some big tours coming up in the next 12 months in their hopes to qualify for the 2017 ICC Women’s World Cup.

In its bid to give the national women’s team the opportunity to face the world’s toughest opposition, Cricket South Africa (CSA) are happy to announce that the Proteas will host England, West Indies, New Zealand and Bangladesh in 2016, with five televised T20 matches scheduled against England and the Windies – a first in South Africa for the national team.

The much-anticipated series begin with England, who will travel to South Africa from 2-21 February 2016 in a three-match One-Day International (ODI) and three-match T20 series, that will see the last two T20 matches (at PPC Newlands and Bidvest Wanderers Stadiums) played as televised joint double-headers with the Proteas men’s T20s against Australia.

“This is a huge opportunity and very exciting times for women’s cricket,” commented Proteas Head Coach, Hilton Moreeng. “The team has done incredibly well over the last two years, and the women’s game in South Africa has grown in leaps and bounds since the introduction of Momentum as a sponsor.

“For us to play in front of big home crowds as joint double-headers with the Proteas is golden, and we welcome this. We would like to thank both CSA and SuperSport for helping to move the women’s game to greater heights.”

The three ODIs against England will form part of the ICC Women’s Championship, the qualification tournament for the 2017 ICC Women’s World Cup that will take place in England. South Africa – who are currently in third place on the log – will look to win the series and continue their lead on England, who are currently fourth.

“It goes without saying that every match in all tours is a must-win, but it will be particularly satisfying if we could beat England, who have been one of our toughest competitors yet,” Moreeng continued.

“The Women’s Championship tournament has brought about a new dimension to the way in which ODIs are played with so much at stake and has almost levelled the playing field when it comes to planning fixtures with other sides.

“It allows a developing team like ours to be exposed to the world’s best sides, and with each match situation we are exposed to, we can only improve.”

New Zealand (who are sixth in the ICC Women’s Championship log) will tour South Africa in a seven-match ODI series that will take place in Kimberley, Paarl and Stellenbosch from 8-24 October 2016. The last time the two sides met was when South Africa knocked the White Ferns out of the ICC Women’s World T20 in 2014.

“The next year is going to be a very significant and encouraging one for our women’s cricket,” commented Corrie van Zyl, CSA General Manager: Cricket. “For the first time our Momentum national women’s side will share a platform with the Oxigen Proteas when they play their T20 International matches at home, at the same venue and going out to a live TV audience.

“This will expose our women to a far greater live audience and will also assist their preparation for the ICC Women’s World Twenty20.

“We will also be playing against some of the best teams in the world and the fact that several of our women players, Mignon du Preez, Marizanne Kapp and Dané van Niekerk, have been contracted to play in the Australian Women’s Big Bash League.”