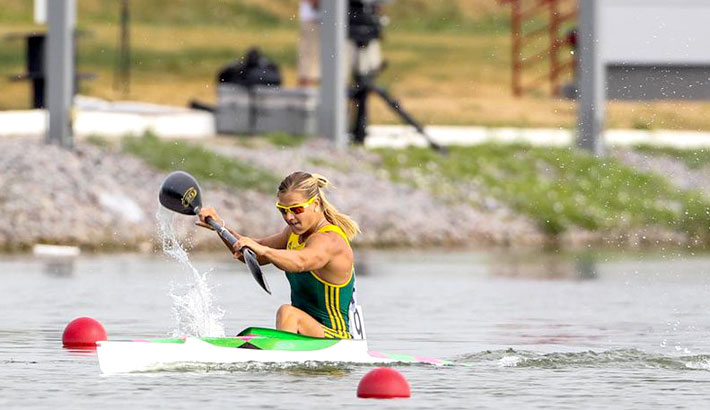 If you were to meet Bridgitte Hartley, she may describe herself as an optimistic blonde with a flair for sport.

What she won’t readily tell you is that in 2012, she made history at the Olympics when she bagged bronze in the K1 500m final.

It was South Africa’s first ever canoeing Olympic medal, and Hartley’s podium finish also meant she became SA’s first female Olympic medallist since Hestrie Cloete in 2004, becoming the first female athlete to win a medal for Team SA at London 2012.

For Hartley, she expects such results from herself because of the incredible effort she puts in to her training and preparations to represent South Africa on the international stage. While she is aware that her international competitors have more support than she could dream of, that is no excuse for Hartley.

While women’s sport is certainly becoming more viable and Corporate South Africa is investing more in this space, Hartley represents a small sporting code. Backed by a largely  community-based support base, she speaks highly of those behind the scenes who help to make her dreams a reality.

The reality is that Hartley will line up once again in Rio with realistic shot at bagging a medal, and her supporters are bold with hope that she will return home boasting another podium finish.

She is inspiring a whole new generation of paddlers, and is aware of the role she has in supporting other women who aspire to achieve at the highest level like she has.

Bridgitte spoke to gsport about her journey to qualification …

Bridgitte, how does it feel to have qualified for Rio 2016?

When I heard the news I just wanted to cry again as if I had won a medal!  I had some self-doubt due to the fact that I had coached myself for most of the year on the water. I never went into World Champs with 100% confidence, so getting the qualifying spot for Rio means so much to me, it’s given me tons more motivation for the new season of training.

Tell us about the effort that it has taken to attain qualification?

The season is very long, as it starts in October of the previous year, and the base season ends in early February with cross training. From February until August its building blocks getting faster and faster, with World Cups in May, and World Champs in August.

I train six days a week with only Sunday rest, a half day on Wednesday and Saturday.

It’s like a full time job with almost three sessions a day, always two paddles then supplemented with 3-4 gym sessions, running as well as yoga or Pilates in-between.

What has been the biggest challenge to reaching this point?

The biggest challenge for me is most definitely trying to find female training partners, as the best paddlers are all abroad. Travelling alone has become very tough for me, as well as staying alone in foreign countries so I can find the best training partners and coaches.

Who has been your biggest supporter in getting as far as you have in your career?

I have had many people supporting me along the way, so I can’t say that I can single out one person. I have had so many meetings with many people who have helped me make decisions along the way. There is a paddler from Joburg, Alan Witherden, who has always had an interest in my career, and helped me in so many ways over years from making decisions, to meeting new coaches and helping with finances and cars.

I have also had a good support structure from HPC during my previous cycle, and now I have been adopted by the Natal Canoe Club and KZN, so I now have an amazing support team around me giving me input and advice when I need it. My federation has always been in the wings helping me with shortfalls and other support when I need it.

How did winning an Olympic bronze medal in London 2012 impact your career?

I never dreamt of the repercussions that winning a medal at an Olympics would have. It was a real whirlwind of activity when the medallists returned back to SA. There were many media commitments, and we had a great deal of fun, however it was only for a few months. Since then I have been invited to many other awesome events, and met some really amazing people along the way whom I never thought I would meet.

What kind of support do you still require in order to compete with the best?

My sport is still very small in South Africa which makes it tough to easily just slot into a team of athletes who travel with a team manager, physio, doctor, etc., to foreign places. It’s a major challenge for me when I plan training camps, as I always leave my support structure of gym coach, physio, manager and psychologist behind, and take myself into a place where I need to have training partners, but it becomes lonely and often I don’t get regular physio. Ideally, if I had a training partner travelling everywhere with me, as well as our gym coach, a permanent coach and a physio, this would be the ideal world, however this costs too much money for an individual athlete, so I need to find resources as I travel.

What value can you add to a brand if it was keen to associate itself with you?

I always feel like I can add so much to a brand, as I have been a professional athlete for many years now, however my events are never aired on local television unless it’s the Olympics. I don’t often take part in the local river races, so at this stage I hope that my website and social media sites as well as my newsletter can give my sponsors enough coverage. I am sure it’s not enough though, due to the lack of TV coverage and the fact that flat water sprint canoeing is a small sport in South Africa compared to a country like Hungary and Germany.

What charity initiatives are you involved in?

I have been an ambassador for the LIV Village in KZN, I have enjoyed visiting them when I get a chance. I have run the JHB SPAR Ladies Celeb Relay Run in 2012 and 2013 for their cancer drive, as well as swimming the Midmar Mile in a pink costume for cancer.

What is the state of women’s canoeing in SA?

Women’s canoeing in South Africa took a small dive a few years ago, there were very few woman competing at a top level and locally, however I really feel like this has changed recently in the last year or two. I just competed in the Fish River Canoe marathon in Cradock – which was the SA K2 (two people in a boat) championships. I was really happy to see so many woman partnering up to compete for the titles, instead of just paddling with a male counterpart. It was encouraging to see more depth amongst the senior woman, and even a junior crew managing to take 3rd place behind my partner and I.

What is your advice to young canoeists on the rise in SA?

I would most definitely tell young paddlers to have fun in the sport and take part in many events over the different paddling disciplines. Canoeing is an amazing sport featuring surf ski, rivers, flat water marathon as well as flat water sprinting. If our young paddlers can get involved in all the different areas, they can have the most fun, and they will have lots of time to specialise as seniors.

What does the next few months hold for you ahead of Rio 2016?

I have a small break from training now. I am extremely motivated to start the new season again, working on my weak points and making my strong points stronger. I am so excited to do whatever I can, to be the strongest possible when I line up on the start line at the Rio Olympics next year!

Photo 3 caption: One of the toughest things for South African women athletes is to secure are commercial partners to back their years-long athletic investments. Hartley knows that her end of the bargain entails many hours at the paddle, with her international reputation winning her hard-earned recognition. Photo: Supplied

Photo 4 caption: No doubt about where this popular international champion finds her happiness. Photo: Supplied 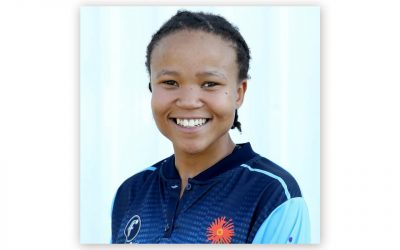 Rising South African cricket player Gandhi Jafta hopes of one day fulfilling her dream of wearing the Momentum Proteas national team colours. While Jafta has been playing cricket for as long as...