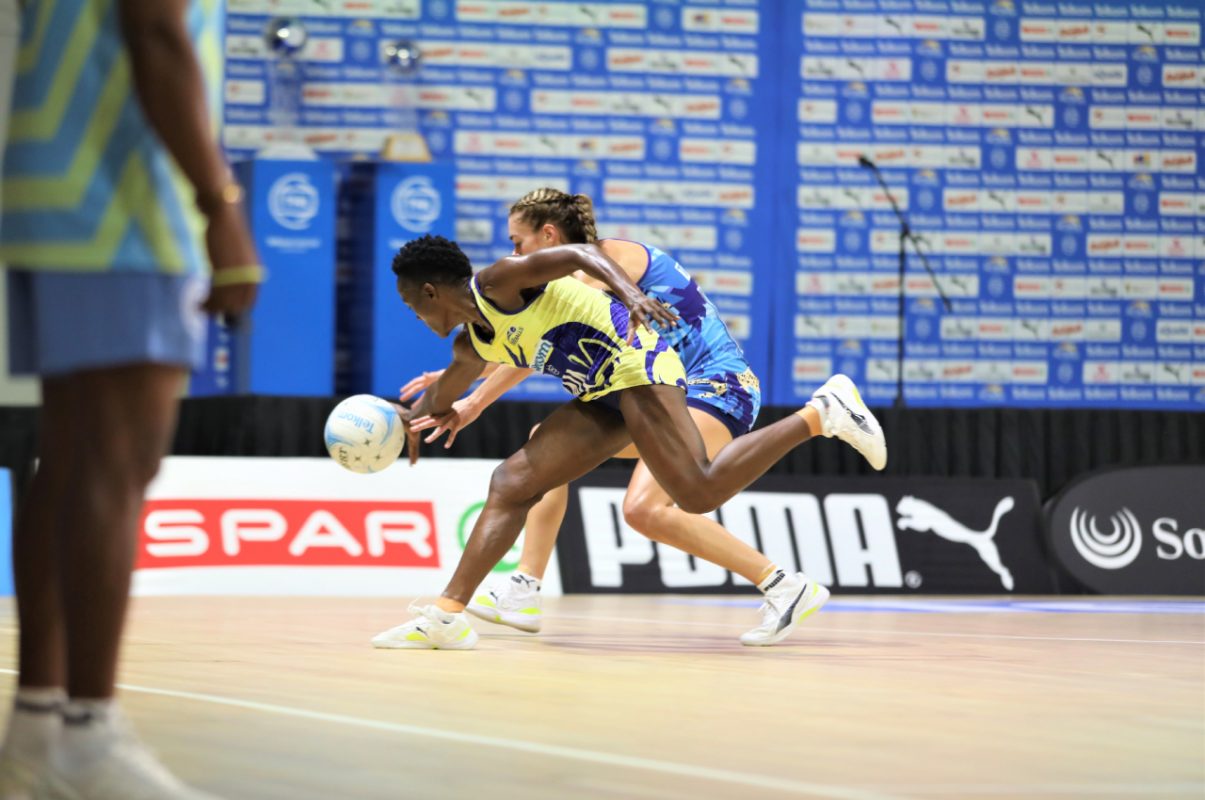 The highly-awaited Gauteng derby between the Golden Fireballs and the Jaguars lived up to its expectations as both teams delivered sublime netball in Durban on Friday, 29 April 2022.

The Fireballs embraced the underdog tag ahead of this match and certainly brought their A game to cause the biggest upset so far in the competition by defeating the Jaguars 43-29. Statistically, the score-line reflected the closely contested match at half-time when both teams drew twenty all.

Fireballs coach, Rozanne Matthyse relied on the bulk of her starting line-up to complete the job having only made just two changes throughout the game but the team fell-short in disrupting the Fireballs’ attack that was led by Bongiwe Msomi. A few lucrative turnovers yielded dividends for Dr Elsje Jordaan’s side as they recorded their second win against the defending champions.

The Southern Stings also walked away with maximum points after beating the Flames 58-44. This was a huge confidence booster following Thursday’s last minute two goal defeat against the Crinums.

In division two, the Mpumalanga Sunbirds displayed class against the Kingdom Queens and beat them 43-29 despite a slow start to the game which saw them trail behind at half-time. The Sunbirds and the Aloes are the only teams in the division who are yet to taste defeat.

Earlier on Friday, a division two clash between the Northern Cape Diamonds and the Eastern Cape Comets saw both sides go into the game in search of their first victories, but it was the Diamonds who managed to do just that after beating the Comets by a narrow 50-49 score-line.

Another mouth-watering encounter saw the Crinums tighten their grip in the last quarter to beat the Stars 46-42 in front of their supporters. The Stars suffered a huge blow after captain Gabisela Kalipa sustained an injury in the first quarter and was replaced by Nontuthuko Khomo on the Wing Attack position. In their moment of need, the Stars’ defensive combination of Danelle van der Linde and Jeante Strydom delivered as the home side equalized through Renske Stoltz’ goal in the third quarter.

The last quarter was all to play for following the Stars’ recovery, who ended up leading by two goals after the third quarter. The Crinums’ relentless pressure upfront compelled the Stars to make a couple of unforced errors on court which resulted to their second successive defeat in the competition.

Meanwhile, the Eastern Cape Aloes remain unbeaten after winning 57-39 against the Limpopo Baobabs. Aloes’ coach, Sameshia Esau switched things up in the third quarter following a close start to the game and made three changes to her side which saw them extend their lead by seventeen goals. The Baobabs struggled to stage a comeback as the Aloes maintained their dominance to win the match comfortably.

Photo 1 Caption: The highly-awaited Gauteng derby between the Golden Fireballs and the Jaguars lived up to its expectations as both teams delivered sublime netball in Durban on Friday, 29 April 2022. Photo: Netball SA / Supplied