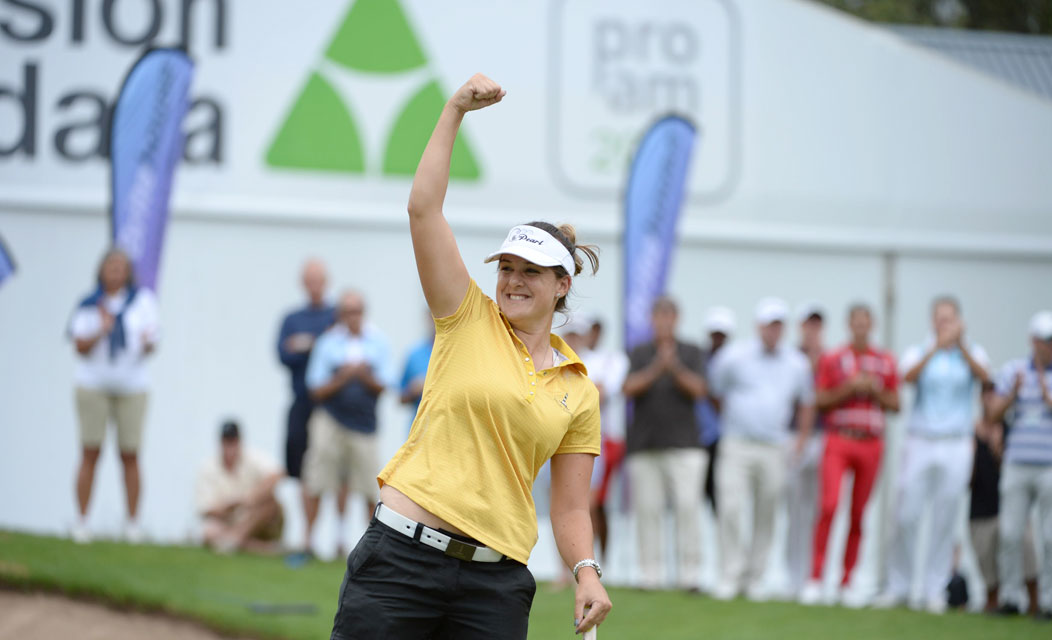 Nicole Garcia rocketed to second in the Chase to the Investec Cup for Ladies Points Standings on the back of a stunning wire-to-wire victory in the Dimension Data Challenge at Fancourt on Sunday.

The 27-year-old Benoni golfer produced a sensational eagle at the par five 17th and boxed her final putt for birdie for a flawless five-under-par 67.

The victory on 10 under 216 earned Garcia her second Sunshine Ladies Tour title, a payday worth R70 000 and 650 points in the points race for the Chase to the Investec Cup for Ladies Final.

Von Ruben notched a trio of birdies on the back nine for a 69, while Pace’s bid for successive titles died a watery death at the par five 17th and she had to settle for third after closing with a 72.

Chase to the Investec Cup for Ladies Final in Focus

Garcia was thrilled with the start to finish victory and the chance to challenge for the R1-million jackpot in the season-finale.

“If I can keep this form going, I’ll have a very realistic shot at this year’s final,” Garcia said.

“What Dimension Data did for us on Valentine’s Day was a game changer. They’ve raised the prize money every year since the Sunshine Ladies Tour launched in 2014, but this year they blew us away when they pushed the purse to R500 000.

“I didn’t make the final last year, so that has been my goal since the start of the season. With this win I actually now have a stab at the title, never mind making the top 10. I am over the moon.”

Garcia carded rounds of 68 and 71 at George Golf Club, but even with a one shot cushion over Von Ruben and Pace, there were nerves on the first tee.

“Lee-Anne, Tandi and Carrie Park are strong players and they all good finishers, so the butterflies were definitely present, but if anyone is going to make you laugh and let you forget about the nerves, it’s Tandi,” Garcia said.

Helping to Take the Tension Down

“I owe her big-time for keeping me relaxed at the start of the round and she kept up the jokes and the banter all the way to the final hole.”

Garcia inched two strokes clear with a birdie at the second and a run of seven straight birdies carried her to the turn in six under.

Pace birdied the eighth and moved to six under with a gain at 10, but Garcia answered with a birdie of her own at 11 to go seven under, keeping the gap at two strokes. Von Ruben, meanwhile, joined Pace at six under with a brace of birdies at 11 and 15.

This status quo held until Pace reached the penultimate hole, where she leaked her tee shot right and found trouble in the trees. She punched out, but hit another tree and her third shot ended in the water surrounding the green.

“I knew I needed to make a few birdies over the last few holes, because I thought Lee-Anne would birdie the 17th and probably the last hole, too” Garcia said.

“We had no idea that she had been in trouble. All I could think standing on the 17th tee was that I needed to make a birdie. I hit a great tee shot and pulled off a tricky approach to leave myself an eight-footer for eagle. I timed that putt perfectly.

“It was a great feeling to walk up the 18th with a three shot lead. It gave me a lot of freedom and I could enjoy the walk and all the people around the green. I hit my second to a foot and made the birdie putt and I was so relieved, because I wanted to finish on a high note.”

Garcia credited her current coach Grant Veenstra and former coach Doug Wood for the form that carried her into the winner’s circle.

“I didn’t think having your boyfriend as your coach was a good idea, but Grant and I started working together a few weeks ago and I am really happy with the progress,” Garcia said. “He is so supportive, even getting up at the crack of dawn this morning to help me warm up. He definitely owns some credit for this win. Dougie and I were together for a long time and he helped me to shape some good habits, so a big thanks to Dougie, as well.”

Garcia won’t have much time to enjoy the victory, though.

“We are heading to Glendower Golf Club for the Sunshine Ladies Tour Classic, sponsored by Canon, on Tuesday,” she said. “That’s where I had my breakthrough win in 2015. I love the course and it really suits my game, so I am going to draw on all this positive energy and gun for back-to-back wins.”

Photo 2 caption: SA Women’s Open champion Tandi von Ruben exceeded her second-round wish of finishing in the top three in her goal of making the Chase to the Investec Cup for Ladies Final, when she notched a trio of birdies on the back nine for a 69, to finish three shots off Challenge champ Garcia. Photo: Sunshine Ladies Tour

Photo 3 caption: Lee-Anne Pace was 1 shot off Garcia’s lead coming into the final round, and the two ended up playing catchup down the final nine with neither able to clear a decisive edge, until Pace’s bid for successive titles ended at the par five 17th, where she found trouble in the trees, eventually settling for third after closing with a 72. Photo: Sunshine Ladies Tour

Photo 4 caption: Pictured with caddie Jason Scheepers at George Golf Club, Garcia racked up five birdies to set a clubhouse target  of four under during Round 1, finishing the first day sharing the top of the leaderboard with Carrie Park. Photo: Sunshine Ladies Tour

Photo 5 caption: “If I can keep this form going, I’ll have a very realistic shot at this year’s final,” said Garcia after her thrilling win on Sunday. The 2017 Dimension Data Challenge champ is pictured here during the second round, when the Benoni golfer carded 71 for a 1-shot advantage going into the final round, and with seven proven winners within five strokes of her lead. Photo: Sunshine Ladies Tour