Gauteng North clinched their third successive title when they thrashed Gauteng Central 60-41 in the final of the Spar national netball championships at the University of Johannesburg on Saturday.

Although they were the team most affected by the withdrawal of the national players for a Proteas training camp, Gauteng North sailed through the tournament without losing a match.

Gauteng Central went into an early lead in the final and were 16-13 ahead at the end of the first quarter, but Gauteng North came storming back in the second quarter, to lead 31-23 at halftime. Gauteng North narrowly won the third quarter by 14 goals to 11, (44-34) but were completely dominant in the final period, scoring 16 goals to Central’s seven.

“We were a bit shaken after the first quarter,” said Gauteng North coach Jenny van Dyk.

Van Dyk had particular praise for goal attack Lindie Lombaard and goal shooter Melissa Myburgh, who heard on Friday that she had been included in the national team for the Diamond League against Malawi, Botswana and Zambia next week. Myburgh was also named player of the tournament.

“Lindie was able to turn over the ball on frequent occasions, and her main strength is her quick release into the circle. Melissa was having such a good tournament that it made sense to make sure that she had the ball in hand. But it was very much a team effort, with the players having complete trust in one another.”

She made no substitutions during the match, saying she believed that the players who started the match should finish it. “I made a positional change, moving Rozanne Matthyse from centre to wing defence, because I could see that there was a problem with our defence.

“Our wing defence was giving their very fast wing attack too much space, but moving Rozanne to wing defence solved that problem. 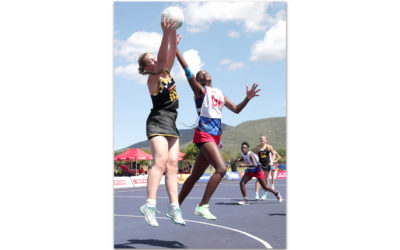