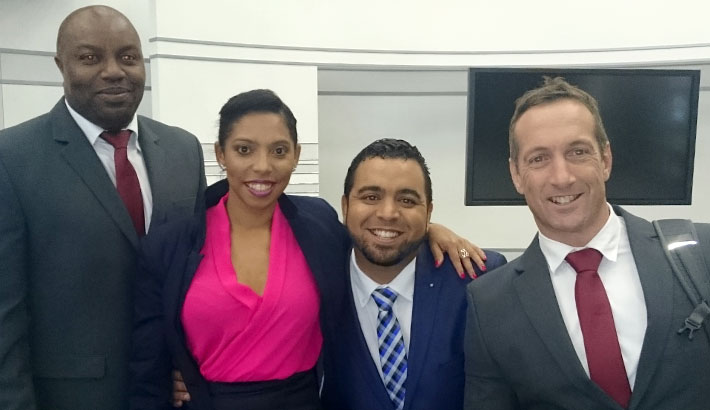 Rugby fanatic, Lizette Khan, has been selected to be part of the SABC Sport Rugby World Cup television presentation team, and the dynamic Drive Time Experience sport anchor on Radio 2000 started her RWC2015 stint exactly a week ago.

She spoke to gsport about her love for rugby, her exciting new role on TV and how she negotiates her way in the world of sports media.

Lizette, congratulations, how does it feel to be part of the SABC Sport Rugby World Cup television presentation team?

It feels amazing. I’m going to lie if I don’t admit that I am a little nervous but I also realise that this is an opportunity to live my dream and thus I am eternally grateful and blessed.

What is your role be on the production and how are you preparing for it?

I am a journalist on the panel using the touch screen to look at player profiles, head to head stats etc. I am also keeping in touch with the rugby loving fans using social media.

Where does your love for rugby come from?

My father exposed my brother and I to various sporting codes from a young age and often entertained us with stories from his sporting days. That’s where the love of what of sport can add to your life comes from.

In Std 8, showing my age, I moved from Loreto Convent (an all-girls school), to Willowridge High School (a co-ed school). For the first time I was exposed to boys, but more interesting to me, was the game of rugby, which I had really only watched on TV.

I remember one particular game when one of the boys had his braces come off his teeth after a particularly hairy ruck and he got up, wiped the blood from his mouth and went on to finish the game, in that moment I thought, how cool is that.

It also made me realise how much the sport and the team meant to the guys on the field and I fell in love with the game.

Who are some of the people who inspire you to be the best you can be in what continues to be a male dominated environment?

Carol Tshabalala will always be an inspiration to me, because she is a true professional.

Meryl Streep inspires me because she is clearly talented but she doesn’t allow an industry that spits out woman after a certain age to define her or the work she chooses to do, her fearless and self-assured attitude is inspirational.

With rugby in particular, I am in awe of guys like Clinton van den Berg and Simnikiwe Xabanisa, who are able to weave the story of the game and the sport together in an entertaining and educational manner.

It is not common for women to work in rugby broadcasting. How does it feel to be called on to fly the flag for women who are keen to follow in your footsteps?

It’s very daunting. Credibility and professionalism is of utmost importance to me, because I want women to realise that you can do anything you want to do, when you put your mind to it.

I have often been told I am not pretty or sexy enough and this is a stereotype I want women to shatter, because we are more than just pretty faces.

How do you rate the Springboks chances of victory in England?

My heart says we are bringing back the trophy, but then the head takes over…Eish. We will definitely progress out of the group stages but getting through the quarter finals, where we will meet either England or Australia will be a tall order.

Then its a possible semi against the All Blacks….very tough.

Having said that, the Boks have proven that when the chips are down they rally and produce amazing results, this might be just one such occasion.

What do you think it will take for women’s rugby in SA to get a slice of overwhelming attention their male counterparts get?

Sponsorship and exposure play a huge part in the attention that is given to the men’s game. Realistically however, so is tradition and culture.

We need to start making it an option for our girls to play the sport, to cheer them on when they play and to put our money where our mouths are to help in progressing in the game.

You are also sports anchor on The Drive Time Experience on Radio 2000. How do you enjoy it?

The Drive Time Experience is the hi-light of my day. I thoroughly enjoy working with the team.

The host of the show Ernest Pillay has taught me so much not just about radio, but about how to take pride in what you do, and that when you have a passion for something professionalism is a non-negotiable.

How do you juggle motherhood and your career?

I am clear about the fact that I can not do everything. That means that I need to prioritize. It also means that I can’t judge myself for falling short in regard to certain things.

Its not easy by any stretch of the imagination but nothing in life worth having comes easily. I am also blessed with parents that are there whenever I need them, a fantastic nanny and a loving son who thinks his mum rocks.

I would love to be an international sports anchor for a major broadcaster, like CNN or Sky Sport.

Photo 2 caption: Khan pictured interacting with fans, drumming up support for the Springboks ahead of their opening match at the 2015 Rugby World Cup. Photo: Supplied

Photo 4 caption:  Khan and other celebrities captured on the front page of the Star newspaper, rallying support for the Springboks and Bok Friday. Photo: Supplied

← Get To Know Jeanne Engela Get to Know: Top Equestrian Athlete Lorette Knowles-Taylor →