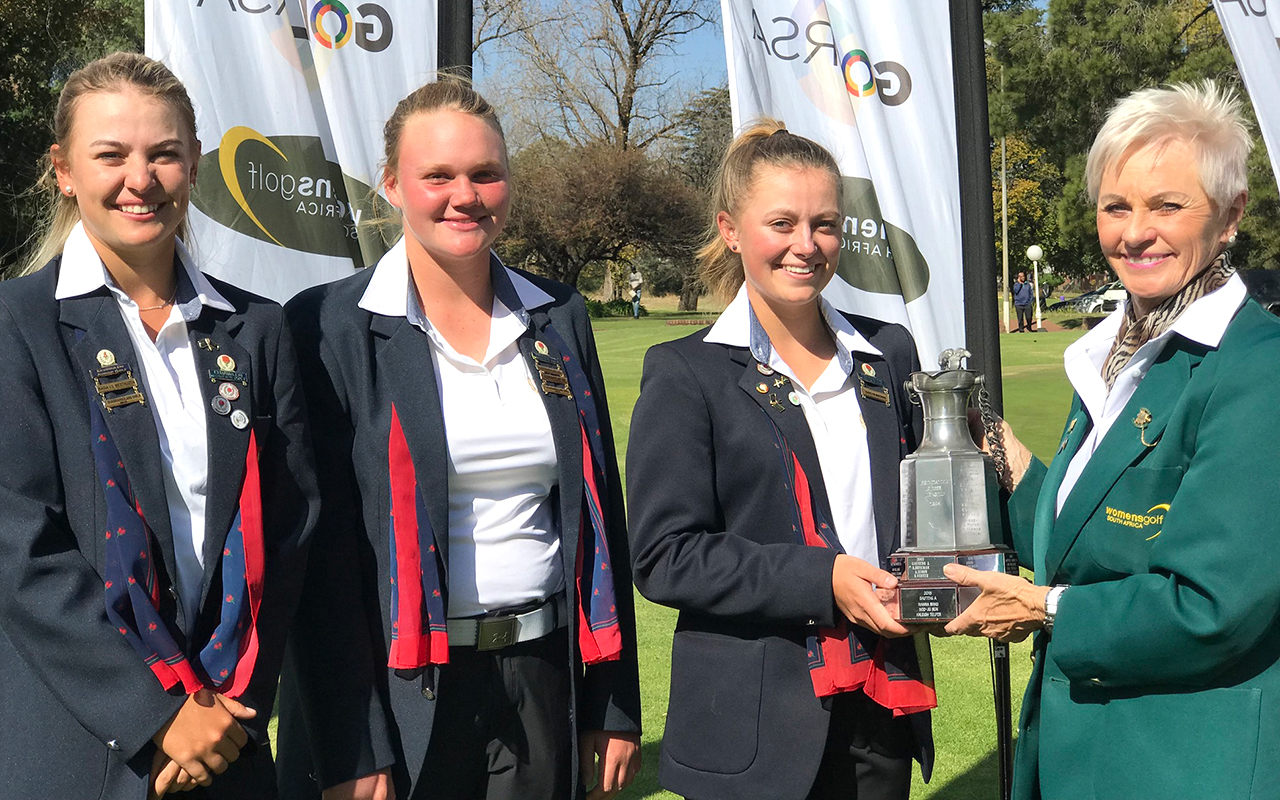 Ekurhuleni and Mpumalanga celebrated a double victory in the 58th SA Women’s Inter-Provincial Championship last October. On Wednesday, the two teams did again when they came up trumps in the SA Women’s 72-Hole Teams Championship in Vereeniging.

Ekurhuleni A overcame a four-shot first round deficit to take pole position in the Swiss Team Trophy with a strong performance on moving day at Maccauvlei Golf Club.

Caitlyn Macnab, Nadia van der Westhuizen and Kiera Floyd combined for rounds of 149 and 147 and the 2018 runners-up surged to the top spot. The trio took a two-shot lead over Gauteng North A into the final day, with Gauteng A a further shot back.

Van der Westhuizen led the final round charge with a 73 and Macnab backed her up with a 75 for a team total of 148 and a four-shot victory on 13-over 589.

“We are absolutely stoked!” – Caitlyn Macnab, captain of the Ekurhuleni A team and winner of the Individual Competition

“We are so proud to be the title holders of the SA Women’s IPT and SA Women’s 72-Hole at the same time. We set ourselves a goal of shoot level par or better, but it was a tough scoring day for the whole field, with tricky pins and lightning fast greens.

“I battled with my ball-striking and Kiera said her game came off the rails on the back nine. Luckily we had done enough in the second and third rounds to keep the opposition at bay and Nadia played amazing golf to pull it through for us.

“We were really happy that we’d given our president Susan Andrew a great birthday present, but it was a bittersweet moment when we learned that our B-team had been relegated. On the positive side, both teams will have something to strive for next year… a title defence and a promotion.

“I am very proud of all six players, because they played their hearts out for Ekurhuleni and that’s what counts. Susan and our manager Lezette Vermaak have been incredible and we are so proud to repay their support with another win. Now we’ll start building for our SA Women’s IPT defence.”

Mpumalanga went the distance at Maccauvlei with a dominant performance in the Challenge Trophy. Danielle Bekker and Nicole Schoeman carded rounds of 158, 155, 158 and 163 to close out a wire-to-wire four-shot victory on 634 for Mpumalanga B.

“We had high expectations for both teams this year,” said captain Patrizia Lombard.

“Winning at Devonvale really injected confidence in the camp and we believed we could win.” – Mpumalanga B Team captain, Patrizia Lombard

Taking the lead in the first round just strengthened our resolve to take it to the finish line. Danielle and Nicole did an exceptional job this week on a very tough golf course. The course itself is fantastic and was in pristine conditions, but the greens were really fast and slippery – nothing like the greens we play at home. It was a test for us and we embraced the challenge.

“We are also really proud of the A-team, who tied for fourth with North West. They were lying fifth going into the final round and managed to square with North West. This means both teams will compete in the Swiss Team Trophy next year.

“All the hard work and sacrifices was worth it.” – Patrizia Lombard

we applaud our president Hanlie Uys and manager Alida Schoeman who they believed in us and supported us unconditionally. We’d also like to thank Womens Golf South Africa and North West Women’s Golf Union for hosting a fantastic event.”

Nina Grey, Bobbi Brown and Isabella van Rooyen sealed a runner-up finish for Western Province C on 638, KwaZulu-Natal B took third on 643, while North West and Mpumalanga A shared fourth on 661.

It was a double celebration for Macnab, who also won the Individual Competition. The Serengeti golfer carded rounds of 71, 72, 72 and 75 to win by two shots on two-over 290.