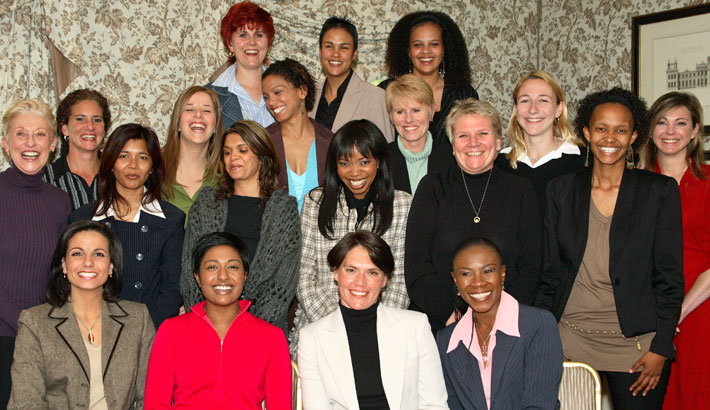 When casting an eye over swimming sensation Penny Heyns’s hugely impressive CV, it is difficult to choose just one highlight.

There’s the first time she broke a world record – on home soil back in 1996, or her double gold medal-winning performance at the Atlanta Olympics that same year. Then there are the 14 world records she broke – 11 of them in a period of just three months, and also the fact that she has represented the country at three Olympic Games.

But when looking back on her swimming days, it’s not the accolades that Heyns misses.

“What I miss is not necessarily the victories and medals but rather the satisfaction of achieving goals,” explained the 31-year-old who since hanging up her swimsuit in 2001 has established herself as a highly sought-after motivational speaker. “You do all that hard work and it feels so good. Your whole body feels satisfied after a hard workout.”

Heyns was selected as the youngest member of the first SA team to compete at an Olympic Games in 32 years in Barcelona in 1992. But it wasn’t until four years later that she carved out her own personal slice of history, by becoming the first South African to win Olympic gold in 44 years. Not only that, she bagged two golds, in the 100 and 200m breaststroke (having set a new world record in the heats of the 100m), so becoming the only woman in history to accomplish the elusive double.

Three years later she was to achieve something else nobody before her had managed – breaking 11 world records in three months on three different continents, and so establishing herself as arguably the greatest breaststroker to date. Another remarkable feat is that she held the 50, 100 and 200m long course breaststroke world records simultaneously in 1999.

So, if she had to choose a particular highlight from her illustrious career, that also included Olympic bronze in 2000, what would it be?

“Obviously Atlanta in terms of pure victory and prominence because the Olympics is the greatest competition there is.” she said.

“But there was that period in 1999 where I broke 11 of my 14 world records in three months, which was mind blowing. Deep down I think that was on a par with Atlanta or even better. I used to say the records were my greatest highlight but they have been broken since then, so are now not as great. Nobody can change the results of Atlanta though.”

It’s been 10 years now since the Atlanta Olympics and as the years pass, Heyns hopes that rather than just being remembered for her achievements in the pool, she has created a more lasting and worthwhile impression on people.

“The victories and records were great but I hope I will be remembered for the positive impact I had on the sport, for good values and showing sportsmanship – that’s where a legacy comes from. There are a bunch of people who can swim and break records but few of them leave a positive impression. I hope that is what I did.”

Heyns, who has always been an outspoken Christian, continues to do so, having published an autobiography in 2004 and working now as a professional speaker, a vocation she describes as an honour, privilege and a massive responsibility.

“Naturally the greatest sense of satisfaction comes from dealing with those less fortunate, and people who really need that kind of message, like kids where you know you could be saying something that could change their lives, and then indirectly the lives of many other people too,” she explained.

Her advice to girls is simple. “I think girls should try as many different sports as possible, and that way find the one that they are good at or enjoy the most. It’s something that could open doors for them, for example, getting a scholarship to study overseas like I did at the University of Nebraska, and you can gain so much life experience.

“There are so many values that sport can teach you, like the fact that nothing is gained in life without commitment.

“But firstly you need to ask yourself why you are doing whatever it is you’re doing. Your motivation has to be right from the start. Is it because you want to be famous and make lots of money? Or is it because you enjoy it; you have a talent for it; or you enjoy the fellowship of it? With purer reasons, your foundation is right.

“Then to get to the top you need single-minded focus. We all know about setting goals. But you also have to design a plan or a roadmap to get you there. And your goals should be obtainable and achievable – they shouldn’t be airy-fairy.”

Heyns’s certainly weren’t airy-fairy, and she has the medals to show for it.

Reacting to the news of her selection as gsport’s first inductee into the Hall of Fame, she reckoned: “I am honoured and humbled because there are a lot of other female athletes in South Africa who have done amazing things. People like Karen Muir, Esther Brand, and Joan Harrison, female icons from the past who won the last Olympic medals for South Africa before I did. So it is a great honour. Thank you.”