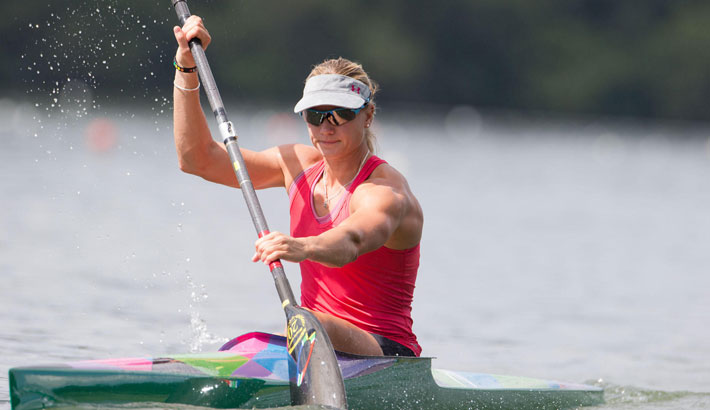 South Africa’s canoe sprint sweetheart Bridgitte Hartley narrowly missed out on a hopeful top five position at the opening round of the 2014 ICF Canoe Sprint World Cup in Milan over the weekend, but the London Olympics bronze medallist was still pleased with her opening performance in the women’s K1 500m A final on Saturday 3 May.

The Natal Canoe Club star had a disastrous start to the 2013 season when she contracted chicken pox, aside from a tricky start to the 2014 season following a patch of typically unpredictable European weather, in the build up to the opening event in Milan.

“My aim was a top five but my first two weeks in Europe did not go quite as planned with the weather being terrible!” Hartley said.

“Not having many training partners also made it quite difficult, as I then wasn’t able to sharpen my speed in training as I’d hoped. The race was however very close, with less than two seconds separating second from sixth, so I guess I’m pretty happy!”

With next year’s ICF Canoe Sprint World Championships set to take place at the same venue, the focus for Hartley ahead of the season opener wasn’t necessarily on this year’s World Cup series, but on using the opening leg as preparation for the World Champs next year.

“I was nervous at the start, but I knew that the weekend was for practice (for next year), and was important in helping me gain experience on the 2015 world champs course, so I was just trying to keep focused on that,” she stressed.

Having finished just 1.720 seconds behind the winner, Lisa Carrington of New Zealand, it is evident that Hartley is right up with the best in the world in terms of her fitness and pre-season preparations, which is encouraging for the Pietermaritzburg local at such an early stage of the season.

“The international K1 woman’s field is extremely strong at the moment and I like to think I have a good, strong base to work off. I wasn’t far off the medallists in this first race of the season, so that is something that I am really happy about,” said a satisfied Hartley.

Being one of the only South African paddlers that is consistently on the Sprint World Cup circuit, it is often difficult for Hartley being away from home for such a long period of time, and not having the same support that many of her international rivals enjoy meant that having her boyfriend, four-time Dusi Canoe Marathon winner Andy Birkett, over there with her gave her a sense of comfort.

“It was great having Andy over to help as it’s so lonely and very stressful trying to get results after races, to see semi-final start times, lane draws and the like.

“And it’s always good to have someone go to the jetty with you, to calm the nerves before a race, so it was really helpful!” she said.

Despite this year’s World Cup circuit offering good rehearsal opportunities and there still being some time before next year’s World Champs, Hartley’s first major peak in the build-up to the 2016 Rio Olympic Games, the typically short World Cup season and her eagerness to perform well at 2015’s international calendar’s pinnacle, sees the London Olympic bronze medallist still highly motivated to be in the hunt for higher honours during the current World Cup season.

“This World Cup is all race practice against the best in the world and, until I have actually qualified for the Rio Olympics, I can only really say this is preparation for World Champs next year, which will be an important Olympic qualifier for me.

“I still have lots of training and racing to do before this year’s World Champs though so I’m really pleased with this past weekend’s solid start to the season. I would also really like to win a medal this season so there is still lots of work left to do,” Hartley concluded hopefully.

Photo caption: SA’s Canoe Sprint Olympic bronze medallist Bridgitte Hartley showed some impressive early season form at the opening leg of the 2014 ICF Canoe Sprint World Cup series in Milan over the weekend, as she ended just over 1.5 seconds behind the winner in sixth place in the women’s K1 500m A Final, on Saturday 3 May, 2014. Photo: Hannes van der Westhuyzen/Gameplan Media