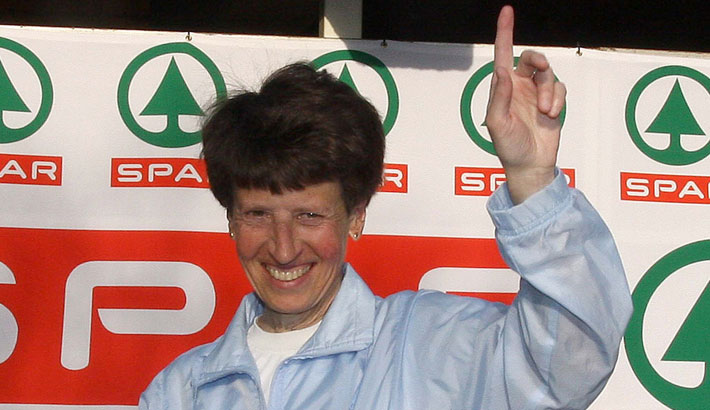 Sonja Laxton completed her 81st Spar Women’s Challenge in Port Elizabeth on Saturday in a time of 57.12 minutes. It was not her best time, but for fans of the runner who has more than 70 national titles to her name, it was a time to celebrate.

On November 17 last year, Sonja was hit by a car during a training run. She suffered multiple fractures, including shoulders, elbows, ribs, ankle and spine, and spent some time in intensive care at the Milpark Hospital.

Story of the #SparwomansracePE is that Sonja Laxton compled her 81st spar challenge race less than six moths after being hit by a car.

Many thought she would never be able to run again, but Sonja’s indomitable spirit saw her back on the road in less than six months. “It came as a surprise to me when I heard she was running,” said her husband, Ian, who is the manager of the Spar Grand Prix.

“We’d been on holiday in the Eastern Cape, and Sonja must have hidden her RAC clothes at the bottom of her suitcase, because we arrived in Port Elizabeth and she told me she was going to run.”

Despite a swollen ankle and a still-painful shoulder, Sonja was the third grandmaster to finish, well ahead of the 70 minutes Ian had predicted.

Her daughter Kim finished in 16th place, in 36.13 minutes, and immediately made her way back to find her mother and escort her to the finish line.

“I’m so proud of Sonja,” said Ian. “And the time she did is amazing, when you remember how badly she was injured.”

Awesome to read the name 'Sonja Laxton 57.12' in the @SPARGrandPrix 60+ results again. Back on the road & part of an event she loves!

Photo 2 caption: A running veteran who has more than 70 national titles to her name, Laxton was hit by a car during a training run on 17 November 2013, and her multiple shoulders, elbows, ribs, ankle and spine fractures required time in intensive care at the Milpark Hospital. The SA icon’s return to her favourite race warmed many hearts on the good news of her return to running form, at the SPAR 10km Challenge in Port Elizabeth on Saturday, 3 May, 2014. Photo: Reg Caldecott