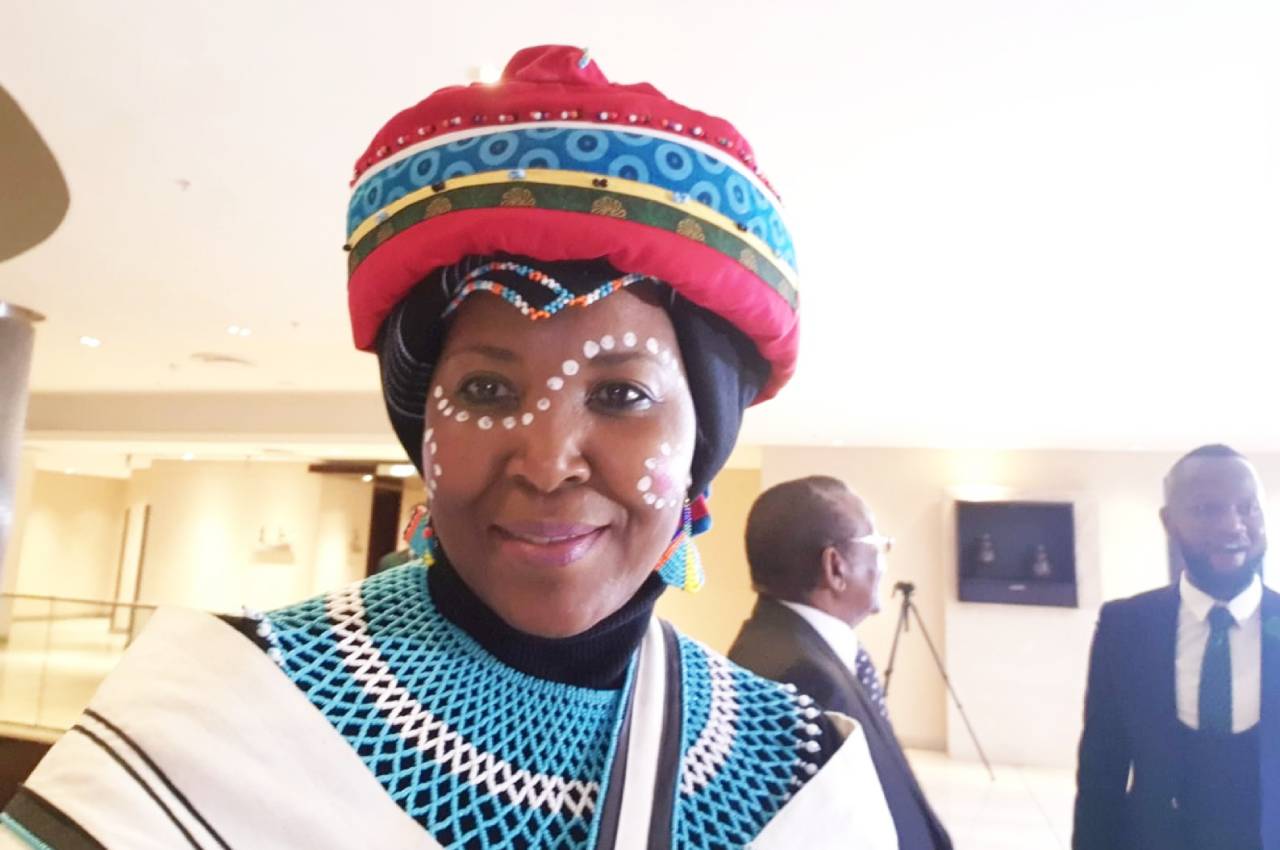 Zola Thamae is the President of the Free State Cricket Union, and the only woman provincial union president in South Africa for the past six years.

While Thamae admits that progress is slow in getting more women cricket administrators to rise to the top of cricket leadership, she points to the rise of women independent directors at board level.

Thamae’s pioneering journey in sport dates back to the eighties, when she participated in recreational activities in the dusty streets of the township.

She went on to captain her university netball team, which also opened leadership doors for her within the Eastern Cape sports structures.

Since then, she has used every experience to build herself up as a sports leader, and break down doors to access opportunities previously only given to men.

In 2013, Thamae made cricket history when she became the first woman president of any of Cricket South Africa’s affiliates after being elected as President of the Free State Cricket Union.

A year later, she was honoured by then Minister of Sport, Fikile Mbalula, as the Sports Administrator of the Year at the 2014 SA Sport Awards.

This experienced sports administrator feels the time is coming to hand over the baton and wants to play her part in blooding and mentoring the next generation of women leaders.

In this wide-ranging interview about her journey in sport, Thamae also talks to Kass Naidoo about the growth of women’s cricket in South Africa and the opportunities that exist for women to forge a cricket out of  playing the game.

Zola, good to talk to you on gsport. Where does your passion for sport come from?

My passion for sport comes from playing recreational activities in the dusty streets of the township. During that time we would challenge one another per local municipality and generate fixtures that we would be looking forward, come weekend. Little did I know that was the beginning of greater things to come?

How did you get into sports administration?

It all began when I was at the college, being the captain of a netball team resulted in my involvement in the committee structures.

“I never looked back, as I was eager to start new things and challenge one another.” – Zola Thamae, President of the Free State Cricket Union

I was then chosen to serve on a provincial structure in Port Elizabeth and later in Eastern Cape National Sport Council (NSC).

You impact the Free State in a lot of what you do. What is sport in the province like?

With time Transformation became the epicentre of our existence, and I needed to be voice that was reckon with to bring about change in the way we do things.

Sport in the province is like a steady ship approaching the shore.

Things are better, I guess, post-1994, where equality and access became the order of the day. Many athletes and administrators got an opportunity to be seen and heard, unleash their talent and be reckon with.

What are the current roles you hold in sport administration?

Board Member at Cricket South Africa;

Chairperson for Cricket Pipeline Committee; and

Tell us about being President of Free State Cricket Union: What is it like? Are there are other female Presidents of Cricket Unions in SA?

At first, it came as a shock for the country, for a black woman being a leader in a male-dominated industry, moreover in Vrystaat.

However when I resume my role, all that changed, and the perceptions that were there, faded with time.

Why are there so few women rising to the top of cricket leadership in the country?

Difficult to pin-point a particular reason when women are taking a different role in commentary rather than in leadership.

The industry itself is male-dominated: that we cannot run away from, and perhaps women are outnumbered during election time. We acknowledge, however, the rise of women in cricket leadership at board level, as independent directors.

What has this journey taught you about leadership in sport?

To be content at all times and at all levels of engagement. Be patient in every situation and never give up when you feel the debate is hot.

Allow other people to give their opinion about you, and learn from that experience. I got experience and wisdom in how to deal with matters, as I believe you need to be in the kitchen in order to know how to cook.

The first outcome of the dish might not be what you wanted, however, be patient and learn from a recipe that came out otherwise, and not run away.

What have been some of your top highlights as a sports administrator?

Being awarded a Sport Administrator of the Year Award in 2014 by the-then Hon Minister of Sport and Recreation, Mr Fikile Mbalula.

What is the one thing you have achieved that nobody really talks about?

The fact that I am the only woman to date who is the President amongst nine provinces for the past six years. It seems unlikely for the foreseeable coming season that any woman to be a President in cricket.

How would you describe the state of women’s cricket in South Africa, and how can we build on the good work done to date?

Women’s cricket has made big strides from the 80’s to the 20’s era.

So many things have changed, support is great from the cricket structures, society and now even the sponsors have come on board.

“It is amazing that we can watch a women’s cricket game on our television sets, years back that was a myth.” – President of the Free State Cricket Union, Thamae on the state of women’s cricket in South Africa

The sacrifices made by women from an era where they were not receiving any salaries or recognition to a point where they are now semi-professionals of the game.

Women’s cricket has got to a level where during the Sports Awards, Captains share the same platform for recognition.

Who are the women in sport who inspire you and why?

Domestically: Caster Semenya. A hard worker and resilient against all odds, whatever the circumstances, she soldiers on, dealing with the world’s perception and remaining resolute is key for her. That is why I am inspired by her motives.

Internationally: Serena Williams. She went through various degrees of discrimination but did not discourage her in any way, in fact even today she is still advocacy for equality in sport. The gap in treating women vs men is still huge, and Serena will not rest until that receives attention it deserves.

What is your advice to women who want to make it in sport – whatever field in sport they choose to pursue?

Women/girls can now play various forms of sport as a career, as compared to previous occasions: That is my advice I can give, and to never give up on their dreams!

How can we help women become better leaders?

Unfortunately, there is still a perception of gender being a focus point when a leader is chosen, rather than what a person can deliver. Society should believe in the potential and abilities that women possess and give them a chance to lead.

When a woman occupies a leading role for the first time, induction is key, ongoing workshops and course may play part in building one’s confidence.

What is your hope for South African women’s sport?

My hope is that society should encourage women to take part in sport, rather than being obstacles of change. Equality must be key, and not gender.

How do you feel about South Africa hosting the ICC Women’s T20 World Cup in 2022?

That will be an honour and great for sport in general, a boost for the country’s economy as well.

People will be in a position to witness their heroes playing at their disposal/their back yard and witness live performances.

Hosting will also serve as a promotion of the game to those who are still not familiar with how cricket is played. Cricket is one of the games that promotes social cohesion and the spirit of togetherness. One country, one nation.

What is the best way to make cricket a truly national sport of winners?

Accessibility to all from grassroots level to elite level, however the resources in our townships remains a challenge.

Could you still play a role in South African women’s cricket?

Mentoring will never stop I guess, however I have passed on the baton to other women to take charge, so as to avoid being complacent.

What do you know now about yourself that you wish you knew when you started off in sport?

The skills I possess now and opportunities that came my way would never been afforded to me during the time I started off.

What are you still hoping to achieve as a woman in sport?

I feel like I am at Maslow’s hierarchy and have achieved what I wanted in sport and it is time to give other women a chance to play their part and shine, my role will be to support them and be a Mentor.

What makes you Proudly South African?

Giving one another a chance to perform/excel, and be proud for another person. We are a nation that supports each other, and realising that it is not about you only. The spirit of togetherness.