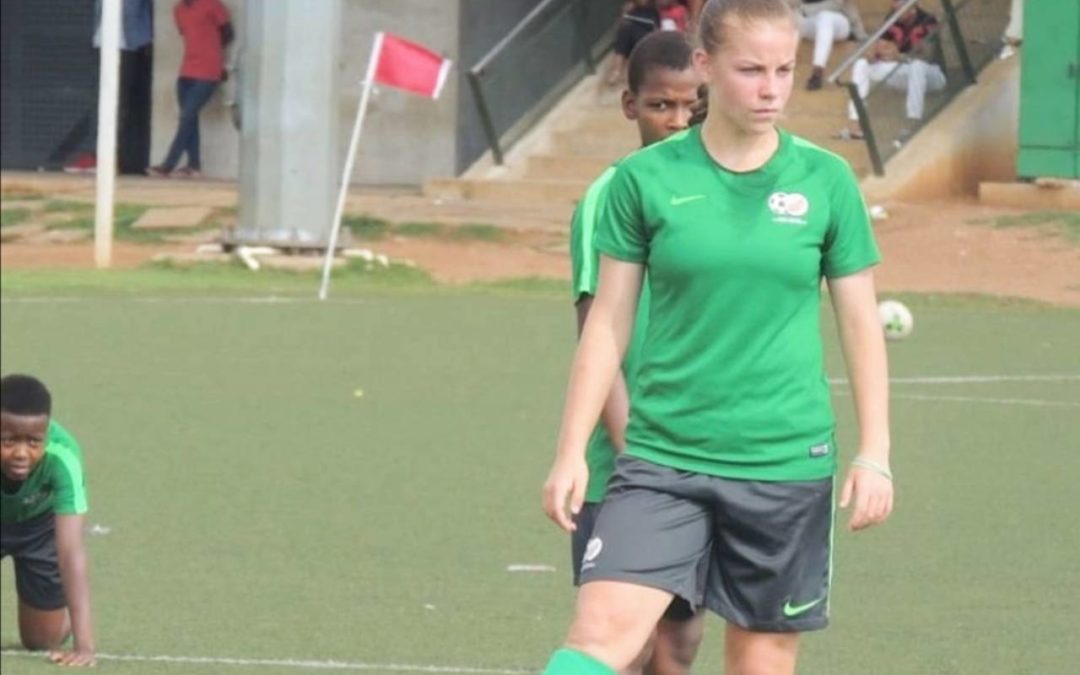 South African U17 Women’s National Team captain, Jessica Wade, has been making her mark in the world of football and is determined to continue climbing up the ladder.

In 2015, Wade began her football journey with JVW Football Club and two years later, she earned her place in the South African U17 national team.

She has been honoured for her outstanding performances by being selected as the team’s captain and is leading with aplomb.

With her passion for football, Wade has not neglected her education, as it is equally important to her, although she insists that is has not been an easy feat.

She has been fortunate to have South African coach Simphiwe Dludlu and Banyana Banyana captain Janine van Wyk as her mentors who have guided her career so far.

Speaking with Celine Abrahams from her home in Alberton, Wade chats about her passion for football and the state that she would like to see South African soccer in the next five years.

Jessica, how has it been training on your own?

It’s a bit difficult with COVID-19 and everything going on with the lockdown, but I think that it is important to have a positive attitude and make the most of a bad situation. I’ve just been doing as much as I can on my own, a lot of gym work and skills training.

Other than training, what else are you doing to keep yourself motivated?

My motivation really is just to improve every single day and I don’t think we need to look at lockdown as doom and gloom. I know it is harder for some people, but just take this as an opportunity where you get time to reflect and look at the things you need to improve on and I use that as my motivation.

What is it like having to balance your education and your football career?

Well, my academics are really important to me so I’ve been making sure that I am doing a lot of schoolwork, staying up to date and doing a bit more extra, so that when the time comes for football again, I am not behind or stressed, so I have been studying quite hard.

“They really understand that football is important to me and they try to help me do the best that I can in both areas.” – South African U17 captain, Jessica Wade

At times it can be quite challenging because both aspects demand a lot of work but then again you can’t be afraid of working hard so I’m continuously working hard at a fantastic school – Waterstone College where the teachers are so helpful and they really understand that football is important to me and they try to help me do the best that I can in both areas.

Before lockdown, we had been seeing your career starting to rise. Where does your love for sport come from?

I think it really just came from my family. Both my parents were fantastic athletes and further down the family tree you can see that too but I think I just owe it to the hours spent in the garden playing with my mom and dad, kicking a soccer ball, throwing a tennis ball…I just learnt to love every moment of it.

Who would you say has been your inspiration?

Growing up I watched a lot of English Premier League when I was little and I enjoyed that but there wasn’t really a player that inspired me and grew my passion, it was just the feeling that I got every time I walked onto a football pitch or just kicked a soccer ball.

When did your big break come in terms of joining JVW Girls Football and the national team set-up?

In 2015 I attended a trial and I was really happy to hear that I got into JVW and then in 2017, I went for national team trials and after many, many camps I made the cut but like they say, selection is never permanent and you have to keep proving yourself every year to get in.

And, like I said, my motivation is really just to be better than I was the day before. I just want to be the best that I possibly can be for the team that I am playing for and I want to do my country proud.

For all your hard work, you were gifted with the captain’s armband for the South African U-17 Women’s national team. What has that experience been like?

“Being able to captain your team on the field and leading the team to victory is amazing.” – Jessica Wade

It is an honour and privilege that I definitely don’t take lightly but the feeling is nothing short of incredible. Being able to captain your team on the field and leading the team to victory is amazing. I just hope that I can make my country proud and make my family proud even though it is a big responsibility.

You have been surrounded by the likes of coach Simphiwe Dludlu and Janine van Wyk who captains the senior women’s team. How have they played a part in guiding you?

I have had such great role models to look up to. Coach Dludlu has helped me to just grow and develop as a player in the national team and she has been my coach since 2017 and here we are in 2020! Both Janine and coach Dludlu have captained Banyana Banyana and they have given me such great guidance and helped me be a better captain for my team and I am so grateful for that.

2018 was a vital year for the U17 team as you all had the honour of experiencing what it was like playing at a FIFA World Cup. Tell us about that international experience.

I don’t think I can really describe the experience…But, the best word that I can think of is magical! Being able to walk out onto the field wearing your nations colours and singing the national anthem brings about feelings that I’m never going to forget.

Personally, what lessons did you take away from being on that international stage?

I think I just gained a lot of experience being able to play on the biggest stage possible at an U17 level. But what I think needs to be emphasised is that individually I don’t think South African is so far away as people think we are. I think it’s the fact that we don’t get to play with each other as often. We don’t get to have a two- or three-months training camp and we don’t play with each other from a very young age like a lot of the other countries do.

And, when it comes to an international stage, that is what is important. Other countries have a lot of team chemistry and way more practices together than what we were able to have.

With the introduction of the inaugural SAFA Women’s National League, how do you think this will help change the face of the game?

It’s a huge step for women’s football but for it to improve I think we really need to look at the league and the type of facilities that the players are using and have to play on, whether referees are arriving for matches or not, I think we just really need to try our best to make it as professional as possible and once we do that, I think it is going to grow and become so much better than it is and more competitive.

A lot more money in the league, teams being able to really compete and not just one team running away with it and then in terms of national teams with a couple more camps and further development with the players, maybe starting with the girls from a bit younger, I think we can really look at great things happening.

What would you like to see the state of women’s football in South Africa be in the next five years?

We need to look at consecutively qualifying for U17 World Cups, we need to start making these U20 World Cups, and then hopefully Banyana getting into every World Cup and the Olympics that comes around, winning COSAFA, it’s things like that which I think will help women’s football to grow because we can show that we are not something to be dealt with likely, that we can achieve at a national level.

As soon as lockdown is uplifted and told that you can leave your house and do whatever you want, what would be the one thing that you would do?

The first thing that I am going to do is train at a football field! I can’t wait to get back on the pitch again.

Listen to the full podcast in the slider above!