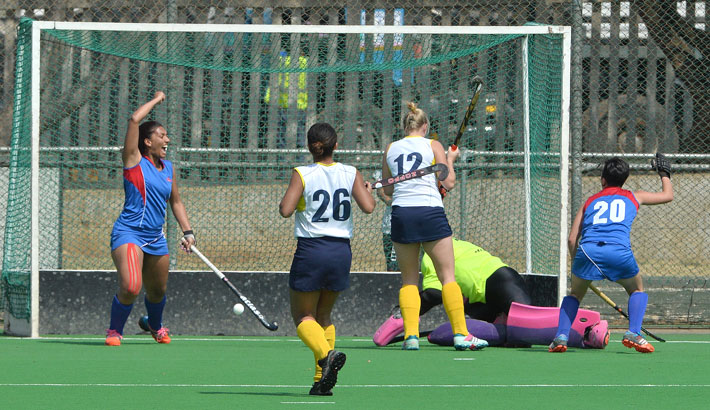 On a day of drama and thrilling action, the semi-finalists in the elite A Section of the SA Women’s Interprovincial Hockey Tournament (IPT) were decided at North-West University in Potchefstroom Thursday.

In the opening match in the A Section Thursday, Western Province beat a competitive South Gauteng Wits 4-0 after a goalless first half.

WP finally broke the deadlock after 43 minutes when Candice Manuel scored from a penalty corner. Five minutes later (48th) Manuel made it 2-0 from field play and a minute after (49th) Nicole de Vries breached the Wits defence from another PC. A minute from full-time (59th) Quanita Bobbs made no error from the penalty spot.

WP were good value for their win and recovered well from their shock 5-1 defeat by Southern Gauteng on Thursday.

Match two saw one of the most remarkable matches in the long history of this competition for national supremacy.

Free State – missing three key defenders who had varsity commitments to attend to – and then losing another player through injury in the third quarter, played with remarkable courage and tenacity to beat defending champions Northern Blues 2-1 after the score was deadlocked 0-0 at half-time.

Free State, who won promotion to the A Section after clinching the B Section title in Pietermaritzburg last year, opened the scoring two minutes after half-time (32nd) via a brilliant Lezanne Vermaak finish from a PC.

Northerns equalised in the 39th after Sammy Prost’s field goal, which saw a basic error hurt the Free State cause. However, Northerns had missed from the penalty spot so perhaps it was justice.

The winner went Free State’s way and again came off the stick of the inspired Vermaak, just three minutes from the end (57th) and once again from a PC.

Southerns striker Lilian du Plessis opened the scoring with a reverse-stick rocket in the ninth minute but the strong-finishing Raiders had the last say with goals from field play by Stacey Hiron in the 42nd and Karen Bowyer’s winner in the 55th, only five minutes from the final whistle.

The fourth and final A Section clash was between North West and Border, and the East London girls, who have been on the wrong end of some big goal margins, were outstanding – their fighting spirit winning many admirers – but in the end the host province ended 1-0 winners with the goal coming from Danielle de Wet.

The outcome of the four A Section matches sees Pool B winners Southern Gauteng versus Pool A runners up Northern Blues in the first semi-final at 4pm Friday, while semi-final two features Pool A winners Free State up against Pool B runners up Western Province at 6pm.

The B Section matches remain the same. The nine-team B Section tournament is a round-robin format with no semi-finals or final.

Results at the SA Women’s Hockey IPT in Potchefstroom, on Thursday, 27 August, 2015:

Photo 3 caption:  Free State goal scorer Lezannè Vermaak sets up her sweep as Northerns Keeper Phume Mbande readies herself for the shot, with Kim Hubach ready to clean up during their final round-robin match of the tournament, placing Free State at the top of the Pool A log. Photo: Rebecca Hearfield / gsport