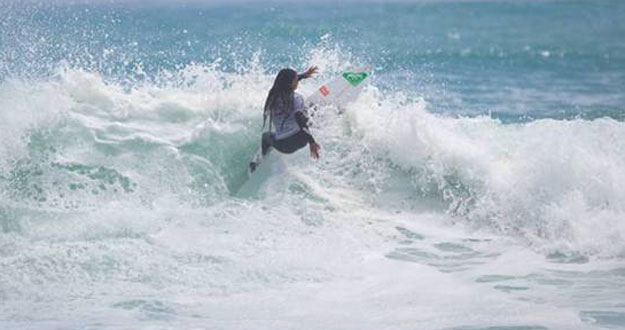 The second edition of Surfing South Africa’s Women’s Pro took place at Long Beach, Kommetjie, Kitchen Windows in Jeffreys Bay and Dairy Beach in Durban yesterday (Sunday November 25) and more than 60 girls of all ages turned out to participate in the three exclusive events for women surfers.

Tanika Hoffman (Clifton) and Sarah Baum (Athlone Park) duplicated their first event results when they won both the Open Division and the Pro Junior finals at Long Beach and Dairy Beach respectively.

Both earned R2,000 for their efforts while Faye Zoetmulder (Port Elizabeth) will be happy that she could celebrate her return to competitive surfing with a victory and a R1,000 cheque in the Open final in J-Bay.

In the Kommetjie event the prize money was boosted by a generous sponsorship of R2,000 cash courtesy of Liquid Blast energy drink, all the contestants and the finalists received product courtesy of Island Tribe sun block while the division winners took home Island Tribe hampers for their efforts.

In a gesture to legendary South African coach Graham Hynes, who lost his house and possessions in the tragic St Francis Bay fire just three weeks ago, Hoffman donated R500 of her prize money.

At Kitchen Windows in Jeffreys Bay, Faye Zoetmulder’s successful return to contest surfing after a 10-month layoff due to a badly broken leg will be welcomed by both EP Surfing and Surfing South Africa. Zoetmulder was about to join the ASP World Qualifying Series 10 months ago when the accident occurred, and she has had to endure numerous operations and setbacks in her rehabilitation process.

At Long Beach in Kommetjie, tough 6-foot surf and difficult conditions did not deter the contestants in any of the divisions. In the Open final Tarryn Chudleigh (Kommetjie) came second to Hoffman, with Roxy Davis (Fish Hoek) taking third and Tasha Mentasti (Cape Town) ending fourth.

Samantha Sutton also went home with a unique Diva watch as the winner of the lucky draw.

Cold Durban weather but good 3-foot surf was the order of the day at Dairy Beach, where legendary surfer Heather Clark (Port Shepstone) had to be happy with her second place, behind Sarah Baum in the Open division. Heidi Palmboom (Bluff) was third and Nicole Pallet (La Lucia) came fourth in this division.

Pallet showed that she is reaching her best form when she posted a runner-up spot behind Baum in the Pro Junior Final. Palmboom took third place and Chanelle Botha (Warner Beach) was fourth.

The full results for all three events are available on the Surfing SA website.