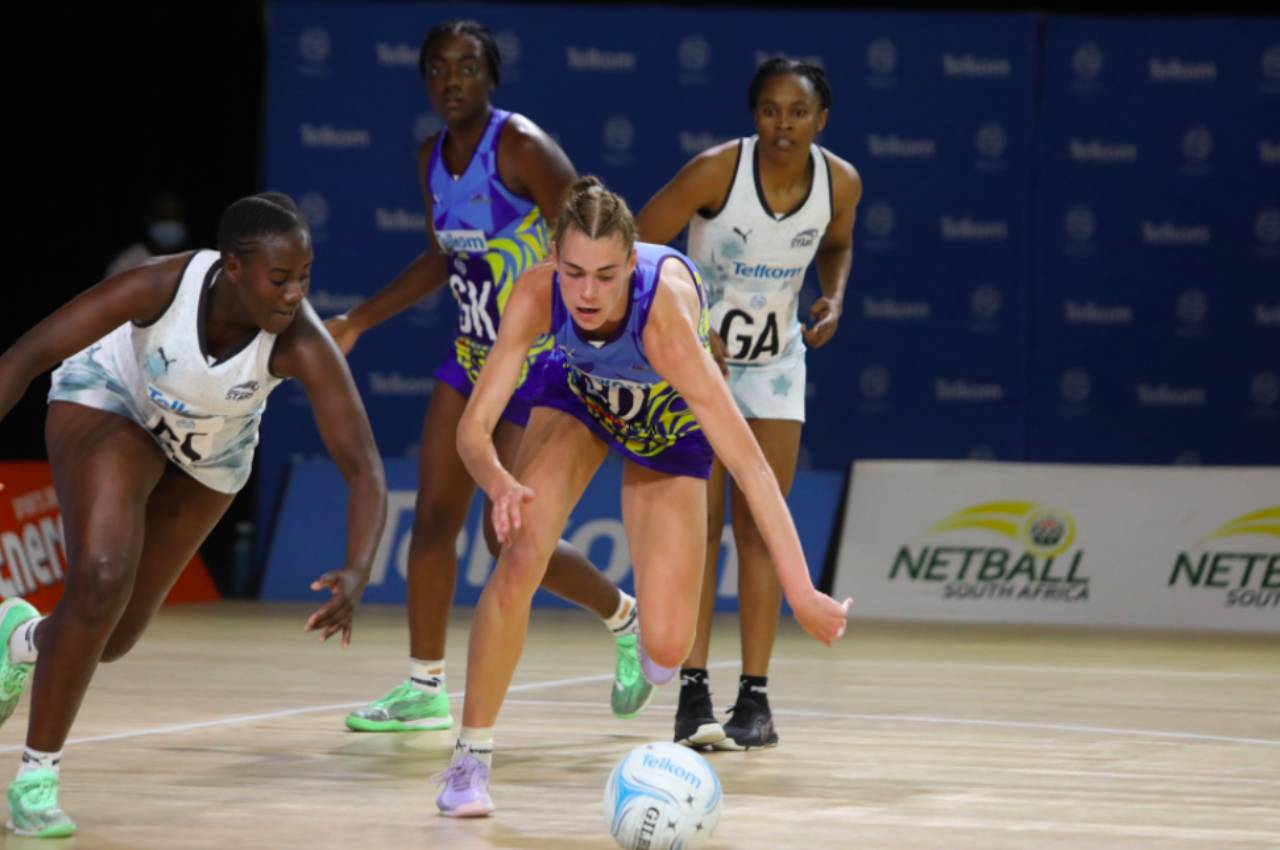 Gauteng Jaguars continued with their winning ways and maintained their unbeaten run in the tournament, beating Kingdom Stars 50-33 in the second leg of Telkom Netball League action on Saturday, 9 October 2021.

Stars had a competitive start to the game, trailing behind by just four goals in the first quarter but the defending champions took control with a 24-14 lead in the second quarter. Three judicious attacking changes and renewed vigor saw Stars fight back to even the third quarter ten all, but the Jaguars’ dominance proved to be too strong for the KZN side.

“We’ll take the win. Stars gave us a great game and we are well aware of the fact that the four teams that we have left to play are one of the teams that will make it to the semi-finals as we have our semi-final spot secured. So, it’s important for us to really get as much information out of the games we play and to start preparing for that as well,” said Jaguars coach, Jenny van Dyk after the game.

However, Queens’ coach, Zola Starke says she has run out of ideas, “I’m frustrated and disappointed. I really expected better from my shooters this time around because we had a great practice session yesterday. We had a positive mindset coming into this game but I’m not quite sure what to do now.”

Northern Cape Diamonds stunned Limpopo Baobabs following a 62-58 victory. The Baobabs led 15-14 in a tightly contested first quarter, but Diamonds managed to turn the tables in the second quarter and pulled away to lead 34-27.

The match intensified in the final quarter as Baobabs attempted a mini comeback to close the gap to just two points in the last five minutes of the game but the few unforced errors that were made in the end cost them crucial points.

Tornados Avenge Themselves Against Aloes

Tornados led from start to finish against Aloes to win 41-38. It was a great comeback having lost to Aloes in the first leg at the Heartfelt Arena in Pretoria. This victory sees Tornados extend their lead in Division two and remain at the top of the log.

Aloes had a total of sixty-one penalties and an average goal percentage of sixty-nine which did not work in their favour even though they only fell short by just three goals.

Tornados’ coach, Danlee Matthew, says her troops need to remain humble as the tournament is far from over, “Mentally it is good for the girls, to know that they can beat Aloes. They struggled against them in the first leg but it’s a step in the right direction for them. They just need to step up from this and show up in every single game from here onwards. We are far from having it in the bag because there are a lot of quarters still ahead of us and we need to be consistent.”

Meanwhile, North West Flames lost all six of their matches in the first leg, but their struggles continued after losing yet another game against Free State Crinums.

Crinums who were very inconsistent in the first leg, winning three and losing three games, claimed a much needed 51-27 victory to close the gap on the log. Crinums’ Goal Attac, Elri Groenewald recorded a ninety percent shooting average which earned her the player of the match accolade after playing a full sixty minutes.

Flames coach, Lizelle Erasmus, lamented on her teams’ injury woes and the absence of their key player, “We knew it was going to be a tough opening game for us. I also have a bit of an issue with Monique’s absence, but we are so proud of her, we don’t want to take the opportunity away from her and hopefully she will be the star of the Proteas. We still have a few things that need to be sorted out and there is also Danielle Malan, who was one of the top shooters in the first leg, she got injured at USSA and unfortunately, I’m here with eleven players.”