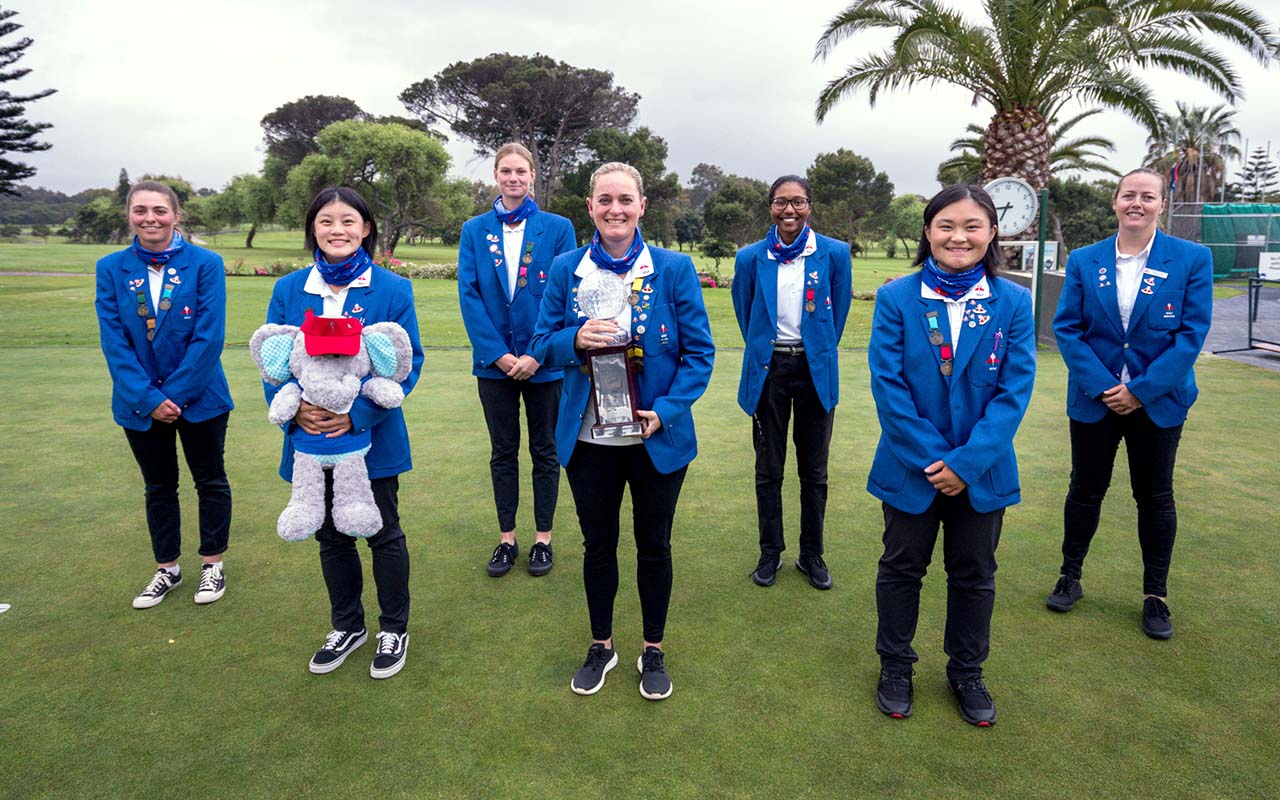 The 2021 SA Women’s Inter-Provincial ended in jubilation for Western Province, who celebrated a return to the winner’s circle with an unbeaten campaign at Rondebosch Golf Club on Friday.

The 2017 champions bellowed their intention on the opening day of the tournament with a commanding nine-stroke victory in the Seeding Round.

The host union posted a team score of 511 to top the A-1 Section standings, with Gauteng second and defending champions Ekurhuleni third. Gauteng North rounded out the top draw.

On day one, Province handed Gauteng North an 8 – 1 drubbing and the local heroes banked 2 more points when they edged Ekurhuleni 5 – 4 on day two.

“We were in a strong position as the only unbeaten team, but Ekurhuleni and Gauteng were both still in it, so we took nothing for granted,” said the team’s captain Vicki Traut ahead of their final round clash with Gauteng. “Gauteng lost 4 – 5 to Ekurhuleni, but they bounced back with a terrific 7.5 – 0.5 win against Gauteng North, so we expected a tough match.”

The Lions pounced to win 2 of the foursomes games. Marine Legentil and Stephanie Barbaglia scored two early wins in the afternoon singles to push Gauteng’s advantage to 4 – 1.

GolfRSA National Squad duo Isabella van Rooyen and Bobbi Brown – playing at No 4 and No 5 respectively – stemmed the bleeding for Western Province and rookie Erica Chen, at No 6, levelled the score when she holed a clutch putt for par on the 18th to beat Kim Turgut 1-up.

The final game between Traut and Gauteng No 1 Kera Healey would be the decider.

“I was out there 1-up against Kera through 17 and I had no idea that it all came down to our game,” said Traut. “On the final hole, I hit my drive down the left, but Kera hit hers into the trees right. She didn’t have a gap and was forced to punch out.

“I aimed straight at the flag and the applause from my team-mates told me it was good.”

Traut had wedged it stiff, and Healy conceded after she missed her par putt from the front of the green.

“That was probably the best wedge I hit in my career. My swing deserted me on the last two holes, but I guess I found it just at the right time,” said the delighted Traut.

“I asked the players to give everything they had, and they really delivered. Every player on the team put their hand up this week, and I applaud every single one for their commitment and their unbelievable fighting spirit.

“I am incredibly proud on all of them.”

“Winning all our matches speaks volumes about the character of these players. This might be a young team, but their grit and determination were unparalleled for four days.” Western Province Team Captain, Vicki Traut

“We owe a great debt to our manager Hayley Davis, who kept us motivated and inspired from start to finish, and to Western Province Golf for their amazing support. We also want to thank Rondebosch Golf Club for presenting us with a pristine course. And to Womens Golf South Africa and GolfRSA, thank you for a wonderful week and for everything you do to promote and grow the women’s game in South Africa.”

Ekurhuleni beat Gauteng North 7 – 2 in the final round to take the runner-up spot, Gauteng took third and the Daisies finished fourth.

Van Rooyen shared the Most Valued Player honour with Ekurhuleni captain Kiera Floyd and her team-mate Kyra van Kan. The trio tied on five points, having won 2 of the 3 foursomes sessions and all their singles games.

Southern Cape also celebrated an unbeaten week as the A-2 Section winners after routing Boland 5.5 – 3.5 in the final round.

KwaZulu-Natal edged Mpumalanga by the same margin to finish second. Boland was third, and Mpumalanga – the 2019 B-Section winners – finished in fourth.

Sonja Bland and Jasmine Furstenburg, at 55 and 14, the oldest and youngest members of the Southern Cape team, were the joint winners of Most Valuable Players list. Both players went unbeaten, amassing the full 6 points on offer.

Final Results of the 2021 SA Women’s Inter-Provincial, at the Rondebosch Golf Club on Friday, 8 October, 2021