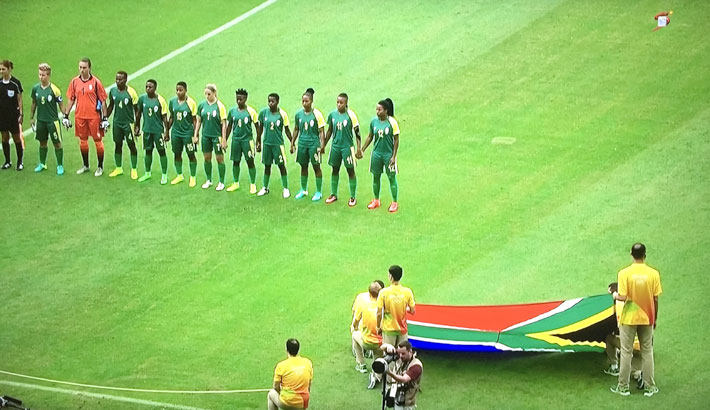 The stage is set for Banyana Banyana’s biggest match of the 2016 Rio Olympic Games, when they face hosts Brazil in their last group stages match of the competition, at the magnificent Amazonia Arena in Manaus tonight.

Arena da Amazonia, as it is called, is a football stadium in Manaus, Amazonas, Brazil – built on the where the old Vivaldão Stadium was. It has an all-seater capacity of 44,300 and was constructed for Brazil’s hosting of the 2014 FIFA World Cup.

South Africa lost the opening two games, going down 1-0 to Sweden and then suffering a 2-0 defeat at the hands of China.

Brazil on the other side comes in high spirit after securing qualification into the quarterfinals without breaking a sweat – they beat China and Sweden 3-0 and 5-1 respectively.

With the hosts rarely coming to play football in these parts of Brazil, tickets for the match have been sold out.

Banyana Banyana midfielder Refiloe Jane says this is a match that does need anyone to motivate the players. “Playing in a packed stadium against the hosts is a motivation on its own.

“We know we have lost two games already and we need to redeem ourselves, that is also motivation on the players. Pulling off a great performance and making sure we get recognised that South Africa has potential to play against the world’s best, is another motivation on its own,” said Jane.

“We know they have a very good team but we have also shown in our play that we can mix it with the top teams. All that’s missing from us is to convert the many chances we create.

“It will be a difficult game for both teams because we need the points and they also want to maintain their momentum seeing they have already qualified for the next round. We are all looking forward to it.”

The climate of Manaus is extremely warm because of its location near the equator. The stadium was designed to minimize the temperatures inside the structure with features such as a white, reflective exterior, plentiful shade over the seating areas, and a large amount of ventilation openings in the façade of the building.

Temperatures are expected to be around 25 degrees celsius at the time of the match.

“It will be hot and humid for South Africa as much as it will be for the Brazilian players because they don’t come from Manaus. There are two teams who need to play and the conditions are the same for both so we just need to be prepared for it,” said Banyana Banyana coach Vera Pauw.

She adds that they will give their all in the match to get a positive result.

“There is a lot difference in the levels of play but we will  make sure we give everything we have to get a win, and ensure we showcase the talent we have.

“Our motivation is, as usual, we are here to perform at the top-level, and we also want to be a team that will be remembered long after the games are gone,” added Pauw.

In the other group match, which will take place simultaneously, China will be up against Sweden.

Photo 1 caption: Screengrab of the Supersport broadcast of the South Africa vs Sweden opening fixture of the 2016 Olympic Games in Rio de Janeiro, on 3 August, 2016. Image: gsport